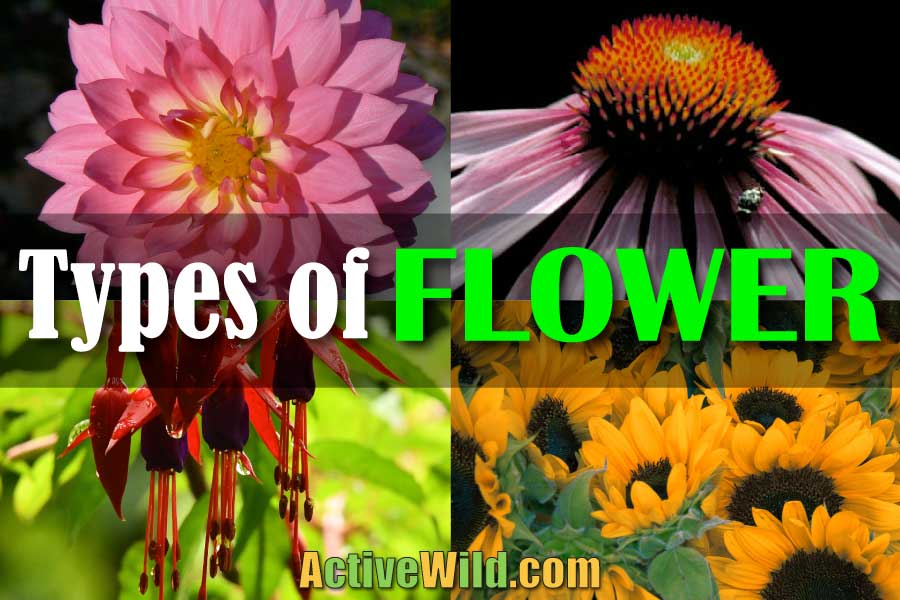 Discover the different types of flower, with pictures and examples. An easy to understand botany lesson on one page!

Types Of Flower With Pictures And Examples

With around 300,000 species, flowering plants (also known as angiosperms) make up the majority of all living plant species.

Flowers come in all shapes and sizes, yet all are designed to perform the same basic function; flowers are the plant’s reproductive organs.

Produced inside flowers are the male and female cells that give rise to a plant’s offspring. Fertilization of the egg takes places inside a flower, as does the development of the plant’s seeds prior to dispersal. Part of the flower itself will become the fruit that protects the seed on its journey. (Flowering plants are the only type of plant to produce fruit.)

In return for this service the pollinator is rewarded with pollen and/or nectar.

The coevolution of insects and flowering plants has been highly beneficial for both groups. However, not all flowers rely on animal pollinators; many species are wind-pollinated.

Flowers that rely on pollinators are often brightly-colored or strongly-scented (or both). Those that are wind-pollinated tend to be smaller and less conspicuous.

There are two main types of flowering plant: monocots (monocotyledons) and dicots (dicotyledons). The differences between the two become apparent early in the development of the plant.

Cotyledons, also known as ‘seed leaves’, are the first leaves to form in a plant embryo.

Monocots have a single cotyledon; whereas dicots have two cotyledons.

The differences between monocots and dicots are also apparent in adult flowers.

The parts of a monocot flower (i.e. its petals, etc.) are usually grouped in multiples of three, and its leaves are narrow with parallel veins.

The parts of a dicot flower are usually arranged in multiples of four or five, and the leaves are broad with net-like veins.

Additionally, with the exception of palms, monocot plants are non-woody.

Most types of flower have petals that are all the same shape and spaced at the same distance from each other around a single, central point; they are radially symmetrical. Flowers such as these are said to be regular, or actinomorphic.

Irregular, or zygomorphic, flowers have at least one petal or sepal* of a different shape or size to the others.

* A sepal is one of the outer ring of petal-like leaves that surround a flower’s petals. They sometimes look like petals themselves.

Instead of being radially symmetrical, irregular flowers are bilaterally symmetrical (i.e. one side is a mirror image of the other). Often a petal at the front is enlarged to form a lip.

If the various parts of the flower (i.e. the sepals, petals, stamens, etc.) are attached to the receptacle below the ovary, then the ovary is said to be superior. Flowers with superior ovaries are said to be hypogynous.

If, however, the various parts of the flower are attached above the ovary, then the ovary is said to be inferior. Flowers with ovaries that are inferior are said to be epigynous.

Some flowers have half-inferior ovaries. Here, the ovary is surrounded by the receptacle that bears the parts of the flower. Such flowers are said to be perigynous or half-epigynous.

The position of the ovary can often be seen by viewing the flower from the side.

A Hermaphrodite plant has flowers that contain both male and female parts. Flowers such as these are said to be ‘bisexual’.

A Monoecious plant has male flowers and female flowers, both of which are found on the same plant.

A Dioecious plant has male flowers and female flowers, with only flowers of the same sex being found on any individual plant.

Some hermaphrodite plants have adaptations to prevent self-pollination. Self-pollination occurs when a plant is pollinated by its own pollen.

An example of a flower adapted to prevent self-pollination is the common primrose, Primula vulgaris. Although its flowers contain both male and female parts, every flower of an individual plant has either extended male parts, or extended female parts.

This lessens the likelihood of the plant being self-pollinated, as an insect carrying pollen from a male flower would be unlikely to deposit it on the smaller female parts of a flower of the same plant. It would have to fly to a plant with extended female parts for pollination to occur.

A flower is typically comprised of four parts: the sepals, petals, stamens and carpels (or pistil). Flowers in which all of these parts are present are said to be ‘complete’.

Flowers in which one or more of these parts are missing are said to be ‘incomplete’.

If a flower has male and female parts (i.e. it is bisexual) then it is said to be perfect, even if it is missing either sepals or petals.

Flowers are either solitary or grouped in clusters known as inflorescences. There are several types of inflorescence. Some inflorescences (e.g. heads, see below) resemble solitary flowers despite being comprised of many small flowers.

Both solitary flowers and inflorescences grow at the end of a stalk known as peduncle.

A catkin is a drooping, cylindrical cluster of many small flowers which often lack petals.

A flower head is a cluster of small flowers that together resemble a single flower. A single head can contain over a thousand small flowers, all of which grow from the same receptacle.

What appear to be the petals of a head are actually whole flowers called ray flowers. The densely-packed flowers in the center of the head are known as disk flowers.

Other names for a head include composite flower, capitulum and pseudanthium (from the Greek for ‘false flower’).

A raceme is an inflorescence in which individual flowers grow on pedicels (short stalks), which themselves grow from a main stem known as a rachis. (The rachis itself is supported by a peduncle.)

The flowers on pedicels at the base of the rachis bloom first, with younger flowers being produced as the shoot grows.

The inflorescences of some plants consist of multiple racemes branching from a main stem. This type of many-branched inflorescence is known as a panicle, or compound raceme.

A corymb is a raceme in which, despite the individual pedicels growing from different points of the rachis, has flowers at the same level (due to the pedicels being of different lengths).

An unbel is an inflorescence in which multiple flower-holding stems branch out from the same point of a central stem. Umbels resemble umbrellas, and the word umbel comes from the same Latin word umbella, as umbrella.

Umbels can either be simple, with a single umbel; or compound, with multiple umbels growing from the same point.

A spike is a raceme in which the flowers grow directly from the rachis, rather than from pedicles.

A spadix is a type of spike in which small flowers grow from a cylindrical, fleshy stem. The spadix is usually surrounded by a bract called a spathe.

On this page we have taken a look at the various tasks a flower performs; the various different parts and structures of a single flower; and the way in which multiple flowers are arranged as inflorescences.

Using this knowledge, you will now be able to compare different types of flowers using the language used by botanists.

You can find out more about plants and the plant kingdom on the following pages:

2 thoughts on “Types Of Flower With Pictures And Examples: Improve Your Knowledge Of Flowering Plants”