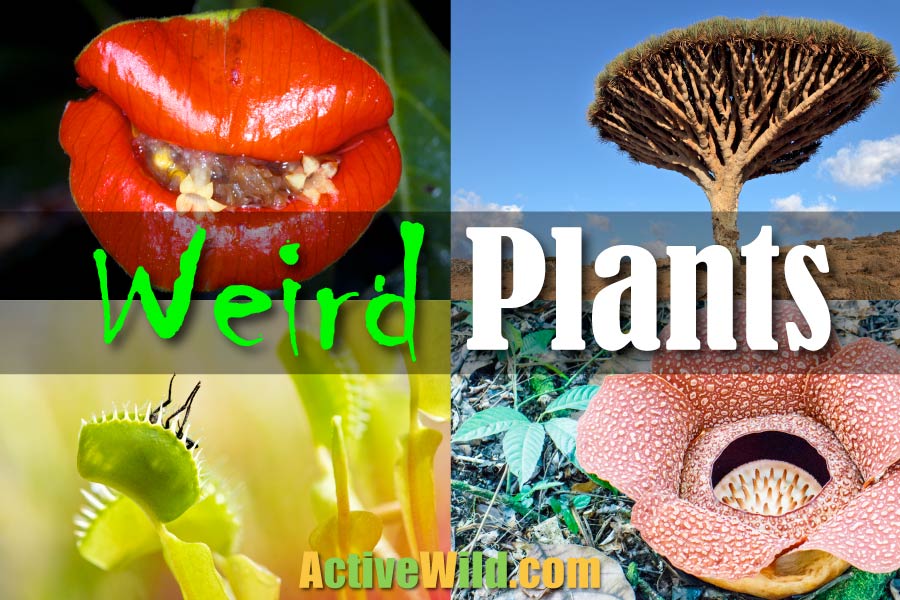 A list of weird plants with pictures and facts. If you thought that plants were boring… prepare to think again!

We’ve covered the plant kingdom thoroughly here at Active Wild. On other pages you’ll find: a complete guide to botany and the plant kingdom; the different types of flower; the parts of a flower; and the life cycle of a plant, together with many more pages of plant-based facts and info.

But if you were thinking that you’d seen all that the plant kingdom has to offer, then we’ve got news for you…

Hidden in the dark depths of tropical rainforests, in inhospitable desert regions, or even hiding in plain sight in woodlands and meadows close to home, are some very unusual species – far removed from your typical daisy or geranium. 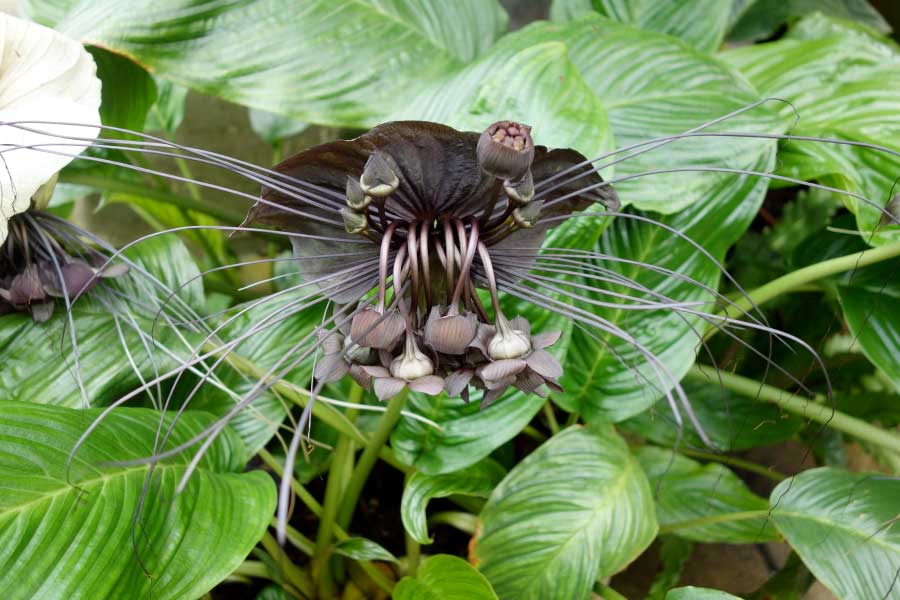 There aren’t many black flowers in the plant kingdom, especially ones as striking as the black bat flower. This alien-looking plant is so-named due to its unusual black / dark purple inflorescence and the shape of its bracts, which resemble a bat’s wings.

Projecting from the center of the 12in (30cm) inflorescence are numerous stalked flowers. Hanging around them are whisker-like leaves that extend over 2 feet (60 cm) in length.

This weird plant is found in the tropical jungles of Southeast Asia.

It’s not just for show – bucket orchids are shaped that way for a reason. The complex structure of plants of genus Coryanthes is the result of their partnership with orchid bees. This partnership has lasted for thousands of years and shaped the evolution of both plant and insect.

The bucket orchid produces a scented chemical used by male bees to court female bees. The flower doesn’t give this gift away for free; in trying to acquire the perfume the male bee often drops into the flower’s bucket and has to undergo an obstacle course within the body of the flower to escape.

While the bee is struggling to break free pollen is attached to its body. When the love-struck insect finally escapes it will visit – and pollinate – other plants (and hopefully impress a female bee with its pleasing scent).

The corpse lily Rafflesia Arnoldii produces the world’s largest individual flower – a striking red bloom with a diameter than can exceed 3.3ft (1m).

Despite its magnificence this natural spectacle may not be one that you’d want to seek out; the flower emits a strong and highly-unpleasant odor. Reminiscent of rotting flesh, the scent explains the Southeast Asian species’ ghoulish name.

The corpse lily is found in the rainforests of Sumatra and Borneo.

It is the fruit of the white baneberry that gives rise to the species’ alternative name of ‘doll’s eyes plant’. Supported by red stalks, the plant’s white berries resemble miniature eyeballs.

This weird plant is found in forests in the United States and Canada. Its macabre-looking berries appear from late summer into the fall. Don’t be tempted to pick them – all parts of the plant are poisonous. 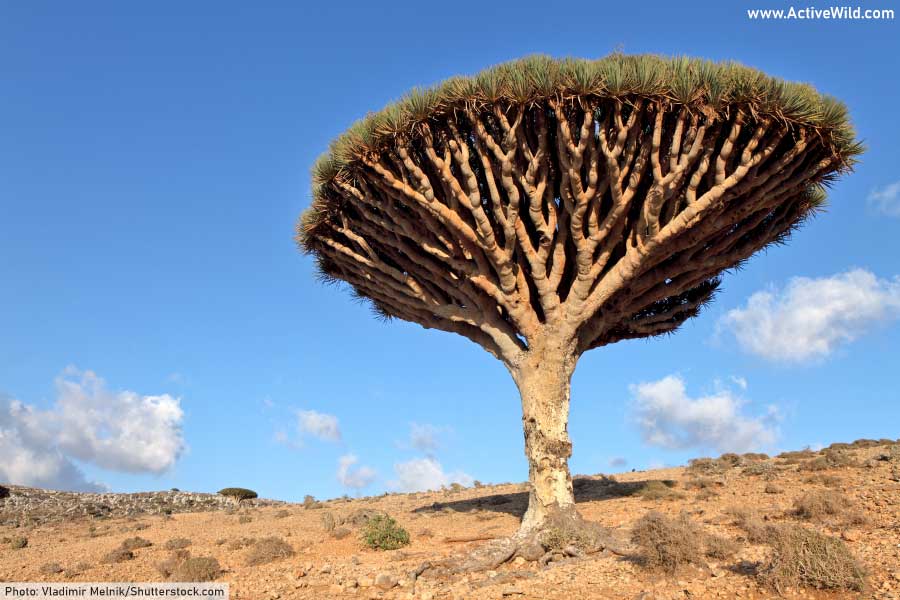 The dragon’s blood tree is found in the wild only on the Socotra archipelago, which is part of Yemen and located in the Arabian sea off the Horn of Africa.

The tree is known for its distinctive mushroom shape. Its hemispherical canopy consists of a dense network of branches supporting an outer layer of tough leaves.

Water rolls off the waxy leaves and drips to the ground at the base of the tree. The thick shadow cast by the canopy prevents the valuable liquid from evaporating.

The dragon’s blood tree’s unusual appearance is not the only reason it has been included in this list of weird plants; the sap it secretes from its wound is bright red in color and known as ‘dragon’s blood’. Highly-prized since ancient times, the resin is used medicinally and also as a dye. 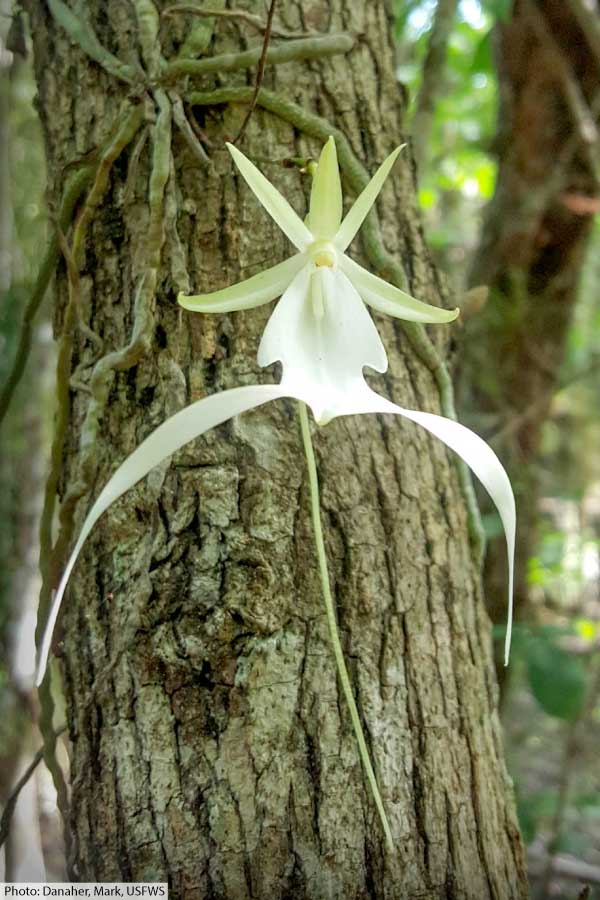 Growing deep in the swampy forests of Florida and Cuba is the spookily-named ghost orchid. The plant lacks leaves and its white flower is supported by a thin stalk, giving the impression that it is floating in mid-air.

The ghost orchid is rare in the wild and difficult to cultivate. It is an endangered species.

It may look like a fungus, but the ghost plant, or indian pipe, is a member of the plant kingdom. The species belongs to the heather family, Ericaceae.

Unlike most plants, the ghost plant lacks chlorophyll – the chemical that gives plant their green color. This means that is unable to create its food via photosynthesis. Instead, the species is parasitic, obtaining food by tricking fungi into providing it with nutrients.

Because it doesn’t require sunlight, the ghost plant is able to survive in the densest, darkest forests. This weird plant is found in temperate forests in Asia, North America and northern parts of South America. 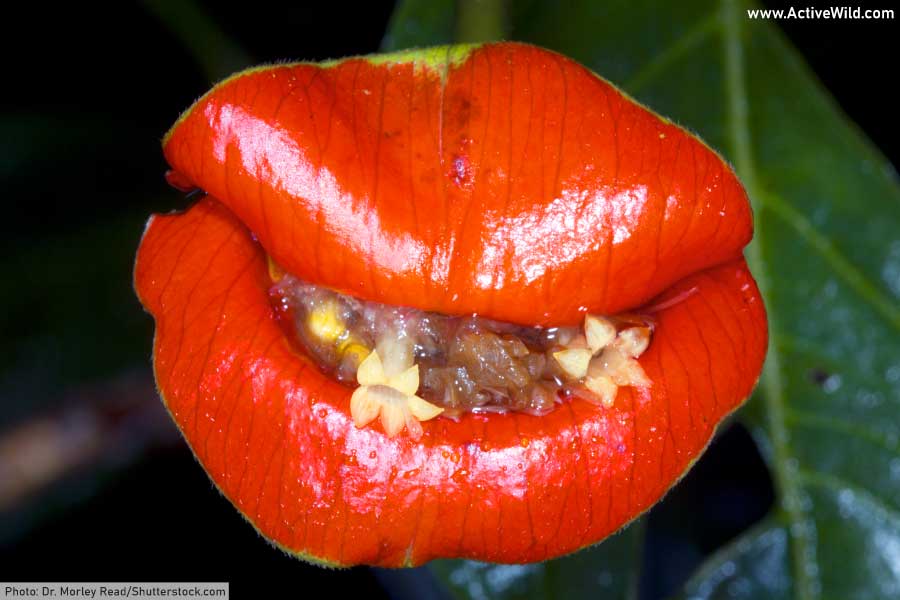 Hot lips is a shrub found in the rainforests of Central and South America. The plant gets its name from the appearance of its bracts, which resemble a pair of bright red lips. The plant’s flowers eventually grow from between the ‘lips’.

Hot lips plants are commonly given as a Valentine’s Day gift in Central America. The plant is also thought to have medicinal properties.

Its unassuming victims are thynnid wasps. These wasps are themselves unusual in that the flightless female is carried into the air by the winged male as a prelude to mating.

Unfortunately for the male wasps, the flower of the king-in-his-carriage resembles a female wasp – both in appearance and also in scent. As the wasp tries to fly away with the flower, pollen is deposited onto its body.

The unlucky wasp may try to seduce several ‘fake females’ – thereby providing a free pollination service to the deceptive flower. This is not a mutually beneficial relationship; the wasp receives nothing in return for his troubles.

Living stone plants (also known as pebble plants) are found in the deserts of southern Africa. They have two succulent leaves which are plump with water – a valuable commodity in this inhospitable desert habitat.

Despite growing on the ground within reach of thirsty animals, these weird plants avoid being eaten due to the color and appearance of their leaves, which resemble rocks.

Plants have devised a multitude of ways to disperse their seeds. Many species rely on animals to carry their seeds away from the parent plant, while others rely on the wind.

The sandbox tree, however, is more self-sufficient. Its pumpkin-shaped fruit explodes with a loud bang, scattering its seeds more than 330ft (100m) from the parent tree.

This weird plant is also known as the ‘monkey no-climb’ due to the sharp thorns on its trunk.

The sandbox tree is found in tropical regions of North and South America. 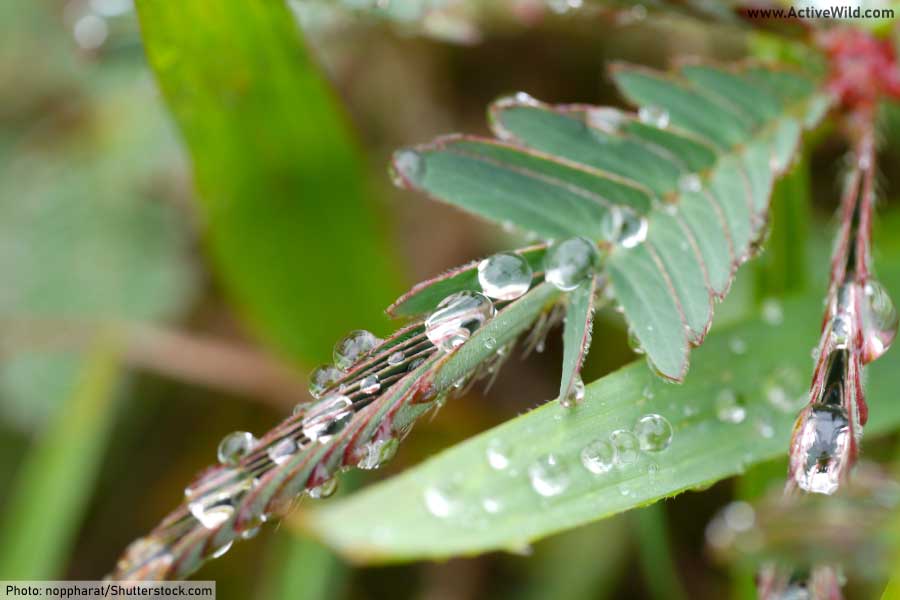 Many species of plants can move, but the process usually takes hours or even days. Not so the sensitive plant Mimosa pudica. It is one of a select group of plants fast enough for its movements to be clearly seen by the human eye.

When the leaves of the sensitive plant are touched, they fold inwards to protect themselves from the potential threat. The entire leaf can disappear within 3 seconds, leaving a prickly, unappetizing stem. It takes around 20 minutes for the leaf to unfold itself once the threat has passed.

The plant’s ability to move may have developed in order to deter herbivorous animals, or to retain moisture by shielding the surface of leaves from the wind.

The sensitive plant is native to Central and South America, and today may also be found in parts of the United States, Asia and Africa.

While the corpse lily may produce the world’s largest single flower, the Titan arum, or corpse flower, holds the record for the largest unbranched inflorescence.

Its spathe (the leaves that surround the inflorescence) has a circumference exceeding 10ft (3m), and the spadix (the spike to which the individual flowers are attached) can reach 9ft (2.7m) in height.

This amazing plant is found only in the rainforests of western Sumatra. When in bloom it raises its temperature and emits a scent that is reminiscent of rotting flesh, both of which serve to attract pollinating insects to its flowers. 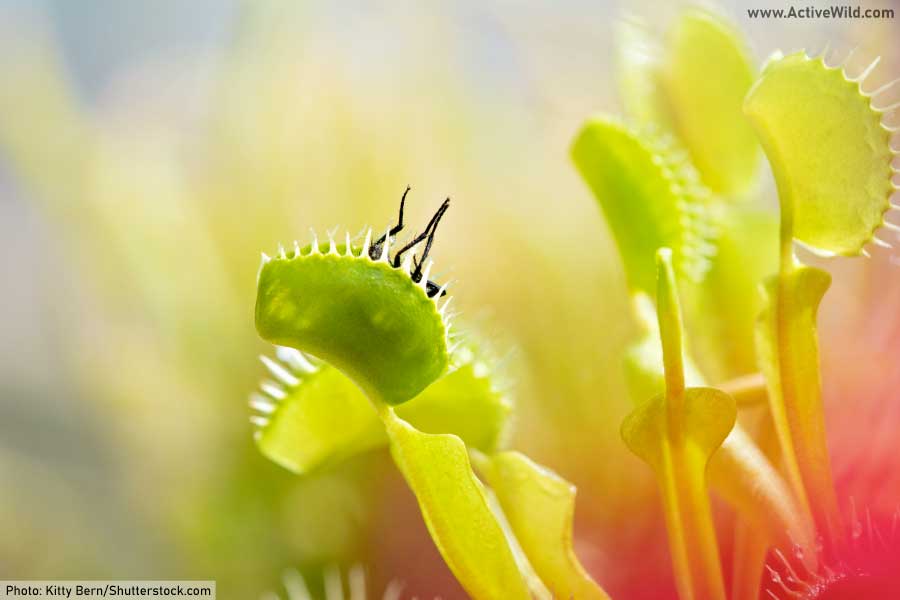 One of the best-known weird plants is the Venus flytrap, a species found naturally in just a small region on the United States’ East Coast in North and South Carolina.

The distinctive hinged ‘jaws’ of this plant are actually modified leaves. On the inner surface of the leaves are trigger hairs, which sense when the plant’s prey – a small insect or arachnid – has ventured into the trap.

The trap isn’t sprung immediately; the plant waits until the insect brushes against the trigger hairs one more time before slamming its jaws shut. 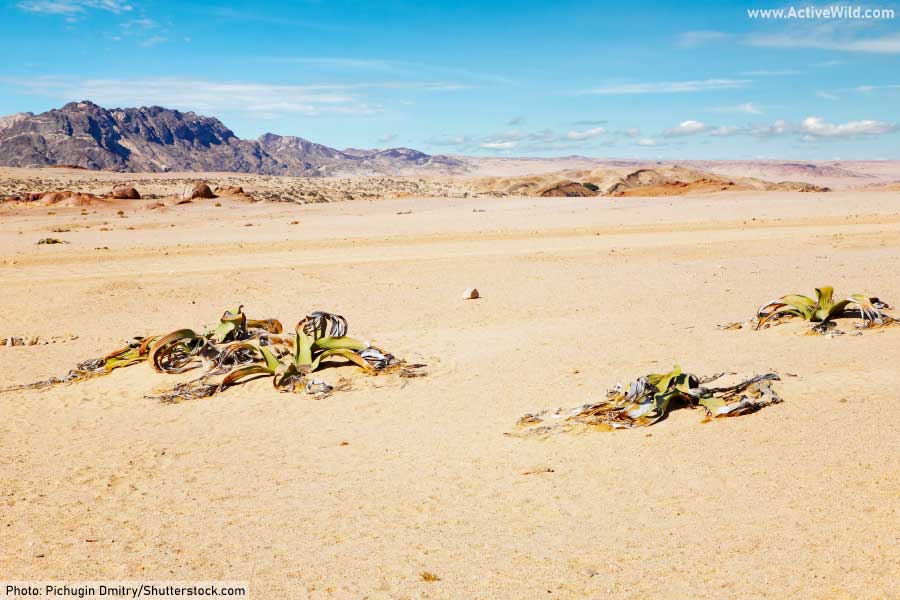 Welwitschia grows in the arid, inhospitable deserts of southern Africa. Above ground it consists of little more than a short stem and two long leaves, which grow continuously and may reach a combined width of over 26ft (8m).

The plant’s long leaves collect dew, which is channeled along grooves and into the ground above the plant’s roots. The plant produces cones, and is pollinated by flies and other insects.

Individual Welwitschia plants may be over 2,000 years old.

We hope that the species included in this list have made you see the plant kingdom in a different light!

Botany is a fascinating subject, and you can discover more about the amazing world of plants on the following pages: