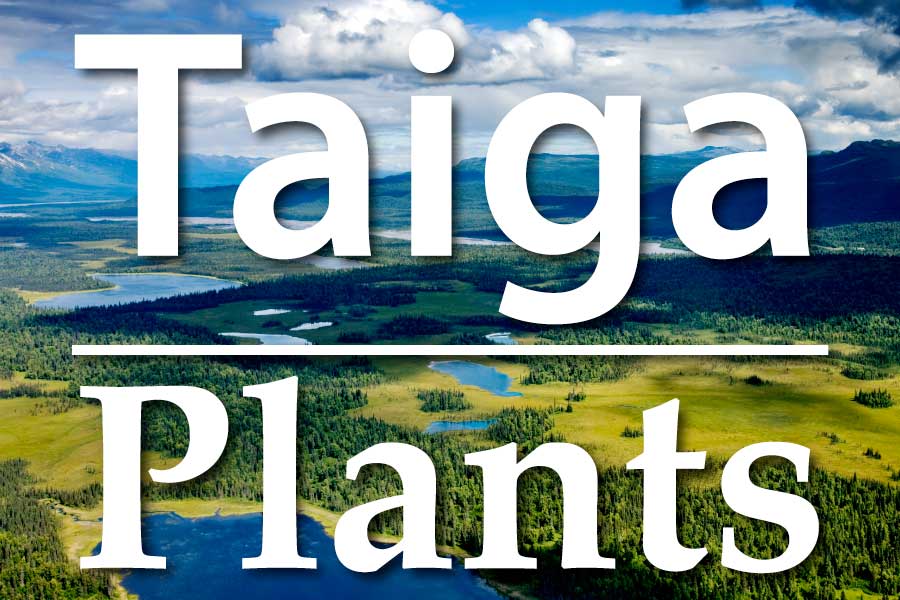 Plants of the taiga: a list of taiga plants with pictures & facts

Other Pages On Active Wild

The taiga is a biome located south of the Arctic tundra and north of the temperate deciduous forests. It is a cold, inhospitable forest habitat in which winter can last for up to nine months.

Taiga plants have to be hardy in order to survive not only the long, cold winter, but also the poor-quality soils typical of the biome.

The growing conditions in the taiga are far from ideal for any plant. In the northernmost reaches of the biome, snow can remain on the ground for up to nine months of the year.

With snow covering their leaves for long periods, taiga plants are left with a very short growing season.

Lying close to the surface of the ground in many parts of the taiga biome is a layer of permanently-frozen soil.

When the spring thaw finally arrives, the frozen layer prevents water from escaping, causing the topsoil to become waterlogged. The ground of the taiga can remain boggy for much of the short-lived spring and summer.

The cold climate also means fewer active soil microbes acting to break down plant matter. This extends the time taken for dead plant matter to be broken down, which increases the acidity of the soil.

Surprisingly for a cold northern region, fire also poses a threat to the plants of the taiga. Wildfires in the taiga biome are often caused by lightning. Some taiga plants have adaptions that allow them to exploit seasonal wildfires to their advantage.

Plant Adaptations For Growing In The Taiga

Conifers have a number of adaptations for living in the taiga. Their conical shape helps to prevent snow settling on their branches. Their branches are flexible to prevent breakage even if snow does accumulate. Having needles for leaves also helps prevent snow build-up.

By growing close together, conifers create their own micro-climate which lessens the difference between summer and winter temperatures.

The evergreen plants of the taiga, having retained their leaves all through the winter, can begin to photosynthesize immediately the snow clears.

Many taiga plants, including conifers and members of the heath family Ericaceae, have fungi called mycorrhizas growing on their roots which assist with the absorption of nutrients. In return, the plant supplies the fungus with sugars created by photosynthesis.

Taiga forests are dominated by conifers, of which spruce, pine, fir and larch are the most common.

In the warmer and more hospitable southern regions of the taiga, non-coniferous, deciduous trees such as birch, poplar and alder also begin to appear. 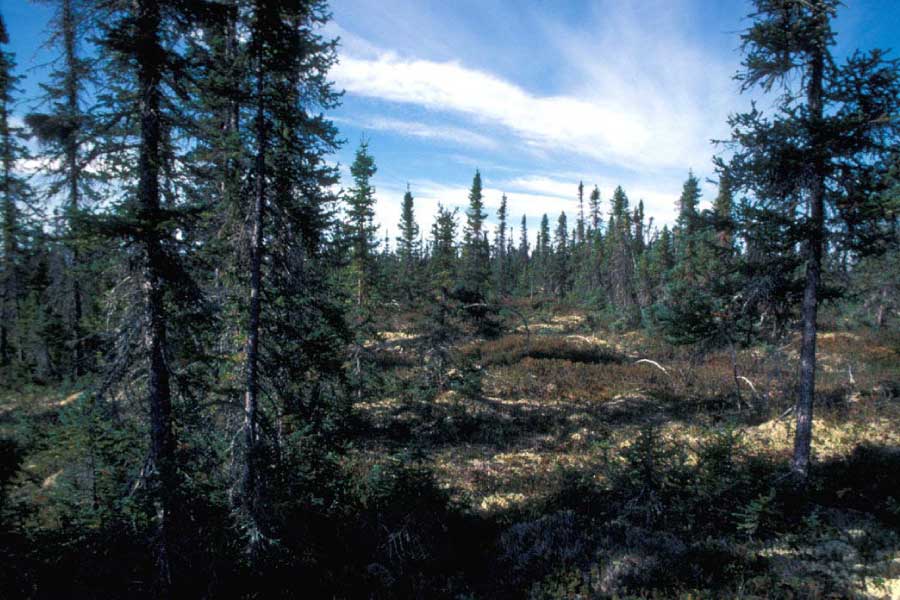 The black spruce is a common tree of the North American taiga. It is found in Canada, Alaska, and in several northern states of the contiguous United States. In some areas its foliage has a dark, almost black appearance, which is what gives the species its English name.

A member of the family Pinaceae, the black spruce usually grows between 5 and 15 m (15 and 50 ft.). It is straighter and less conical in shape than other spruces, and has the smallest cones of all spruces.

Like all spruces, the black spruce’s needles have four sides. This allows them to be rolled between the fingers (unlike the flat needles of fir trees). Another indicator of spruces is that the needles are attached to the branch singly rather than in groups.

The black spruce is tolerant of soil that is acidic and low in nutrients. It can also tolerate moist ground, and will grow in bogs and swamps.

Unlike most other conifers, larches are deciduous, turning yellow and shedding their needles in the fall.

The balsam fir is found in the taiga forests of central and eastern Canada as well as in several northeastern United States. Growing to a height of between 40 and 60 ft. (12.2 and 18.3 m.), it is one of the smaller conifers.

The species is one of the commonest Christmas tree varieties.

The tamarack larch in central and eastern Canada, the northeastern contiguous United States, and in central Alaska. It grows in cold, boggy habitats and is a common tree of the taiga.

A small to mid-sized tree, the tamarack larch’s needles are short and blue-green in color. Like all larches, the species’ needles turn yellow and are shed in the fall.

The dominant tree in the taiga forests of Scandinavia and western Russia is the Scots pine. This mid-sized evergreen tree can be identified by its blue-green needles, which grow in pairs and are between 1.5 and 3 in. (3.8 and 7.6 cm) in length.

Another distinguishing feature of the tree is its reddish-orange bark, which is darker towards the base of the tree.

This hardy species is able to live in areas with poor soil and at high altitudes. 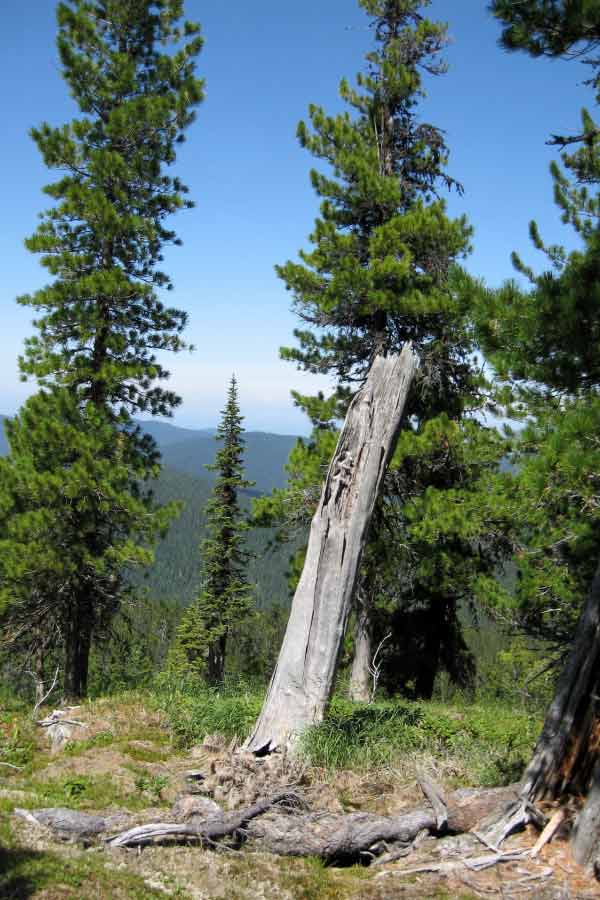 Replacing the Scots pine in the taiga forests in central and much of eastern Russia is the Siberian pine. Also known as the Siberian stone pine, the species grows to around 100 ft. (35 m). The trunk is between 1.5 and 1.8 m (5 and 6 ft.) in diameter.

The seeds of the Siberian pine are an important source of food for indigenous people, and are also harvested commercially for sale as pine nuts. Its timber is also used in construction and for furniture making.

The Siberian fir is an evergreen tree in the fir genus Abies. It is native to the taiga forests of Siberia, and is also found in Mongolia and China. The species grows to a height of between 30 and 35 m (100 and 112 ft.). Oils extracted from the tree’s leaves are commonly used in aromatherapy products and perfumes.

Deciduous Trees Of The Taiga

Although the dominant plants of the taiga are conifers, a number of broad-leaved trees are also found in the taiga biome. These include birches, alders, aspens, willows, poplars, and rowans.

In the warmer, southerly regions of taiga, oaks, maples, and elms are also found.

Other notable plants of the taiga biome include hardy groups such as ferns, mosses and members of the heath family. 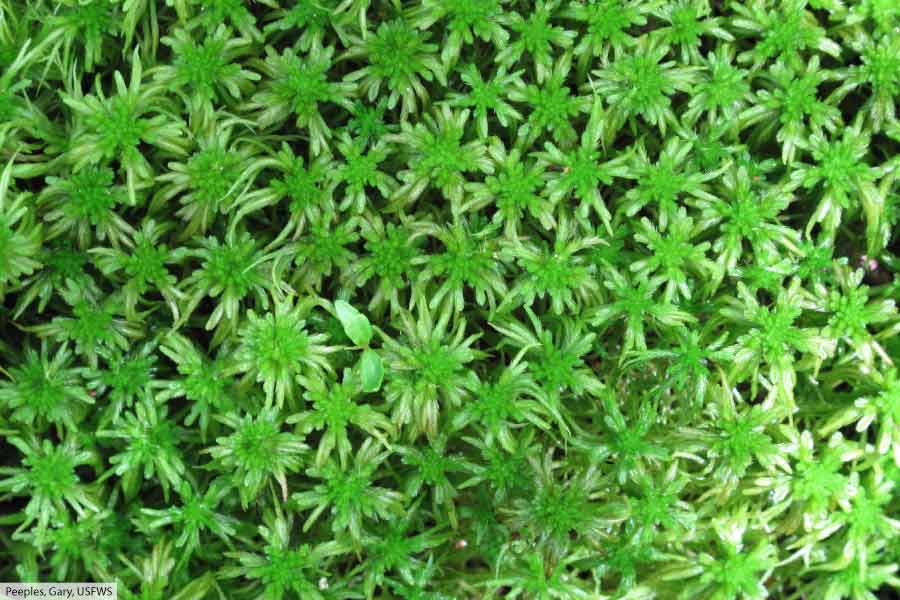 Much of the boggy ground of the taiga is covered with a carpet of sphagnum moss.

There are around 380 species in the genus Sphagnum. Sphagnum species can hold up to 25 times their weight in water. These hardy plants can survive freezing temperatures, waterlogged soils and drying out.

Sphagnum moss is a primary component of peat (it is also known as peat moss). It. As it grows, the moss produces acids, which create acidic soils in which other plants are unable to grow.

The peatbogs of the taiga are also home to various sedges, pond weeds and waterlilies. 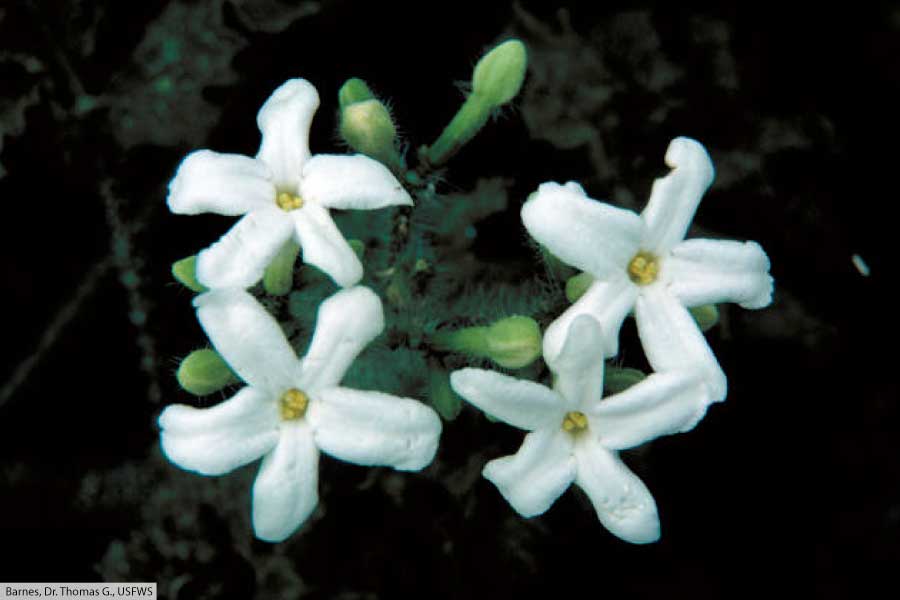 The partridgeberry (also known as the lingonberry and mountain cranberry) Vaccinium vitis-idaea is one of several members of the heath family Ericaceae found in the taiga.

The species is found in areas with acidic, moist soil. It produces edible berries and keeps its leaves all year round, despite being covered by snow for much of the winter.

This member of the heath family is found in bogs in northern North America, Europe and Asia. It is a small evergreen shrub with bell-shaped, white or pink flowers.

The species contains poisons known as grayanotoxins which can affect the nervous system. 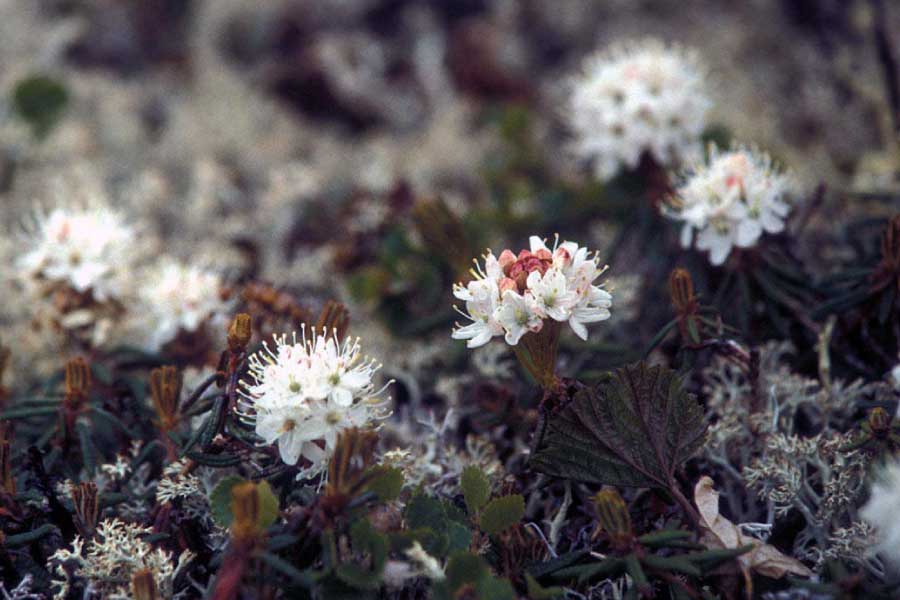 Labrador tea is a member of the heath family Ericacae found in Greenland, Canada and several northern United States. It is an evergreen shrub with small white flowers.

The species’ leaves were traditionally brewed to make tea by indigenous peoples. This custom was continued by early European settlers.

Fireweed, also known as great willowherb and rosebay willowherb, is a flowering plant found throughout much of the taiga biome.

It is a tall plant (growing to a height of around 8 ft. (2.5 m), topped with a conical cluster of pink flowers.

Fireweed is a ‘pioneer species’ – one that is able to quickly establish a foothold after a previous ecosystem has been lost. Fireweed is one of the first plants to grow after fire has destroyed an area of taiga forest.

Cranberry plants are grown commercially for their berries, which are used to make juice and sauce. Like other taiga plants, cranberries grow naturally in cold, acidic northern bogs. 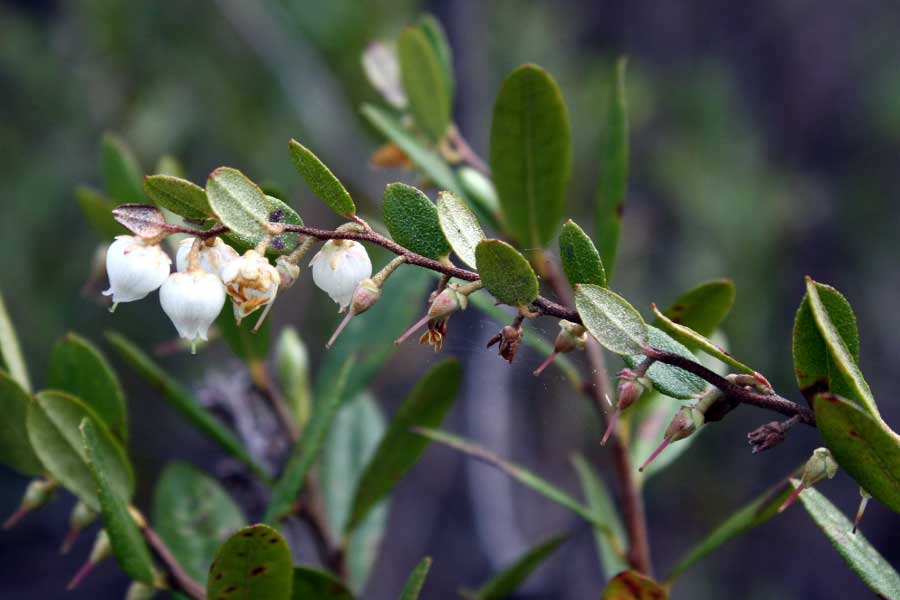 Leatherleaf is a small shrub with thick, rubbery leaves and small white flowers. It is found in bogs in taiga regions all around the world. 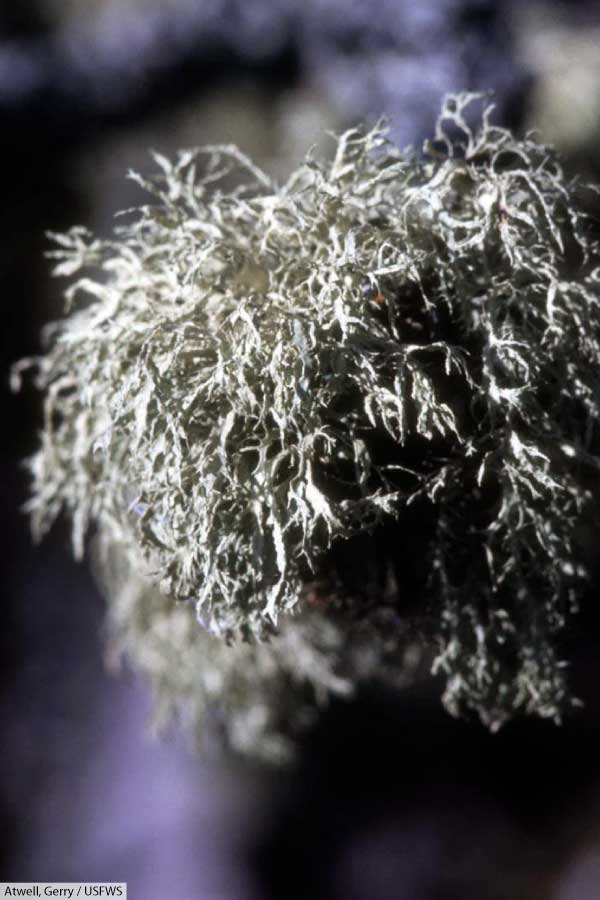 Despite being commonly called ‘reindeer moss’, Cladonia rangiferina is not a plant, but a lichen. Lichens are organisms with both algae and fungi parts. Both parts live together in a mutually beneficial relationship.

Reindeer moss covers large parts of the ground in many taiga forests. It also grows further north in the Alpine tundra biome. Standing between 8 and 10 cm tall ( ) this bushy, branched moss grows at only 3 to 10 mm per year.

As its name suggests, reindeer moss is an important source of food for reindeer / caribou.

Few plants can survive the nutrient-poor soil of the taiga bogs. One group of plants that are able to are the sundews.

Sundews are plants of genus Drosera. They have adapted to living in regions with low nutrient soils by becoming carnivorous.

Sundews secrete droplets of a sweet-tasting substance from the ends of tentacles on their leaves. This substance attracts insects onto the plant.

When an insect lands on the sundew, it is prevented from flying away by the sticky droplets. The plant’s tentacles curl around the insect, further entrapping the victim, whose body is then digested by the plant.

Most of the trees in the taiga biome are conifers. Conifers are trees that produce cones rather than flowers. Taiga plants are adapted to living in regions with poor quality soil and long periods of snow cover. Notable plants of the taiga include sphagnum moss, members of the heath family Ericaceae, the carnivorous sundews, and reindeer moss (which is a lichen, not a plant).

We hope that you have enjoyed this guide to taiga plants. You can find out more about the taiga biome on the following pages:

5 thoughts on “Plants Of The Taiga: A List Of Taiga Plants With Pictures & Facts”