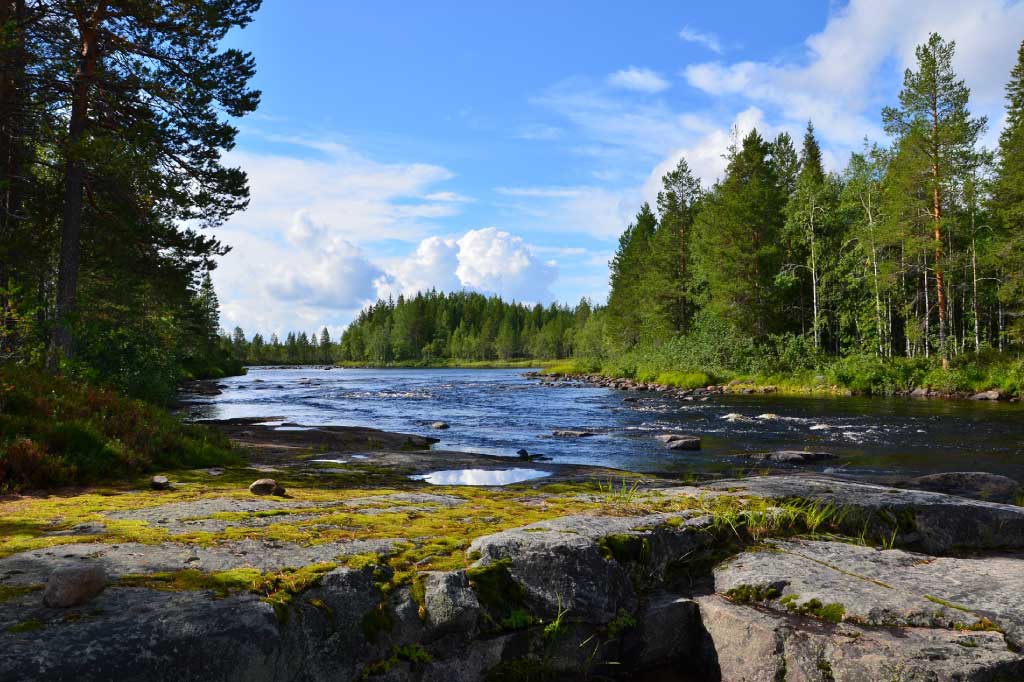 A vast, northern wilderness–the world’s largest land biome–whose snow-covered landscapes are dominated by dark conifer forests. Welcome to the taiga, an inhospitable region that stretches from coast to coast across North America and Eurasia…

You can find out more about the taiga biome on these pages:

What Is The Taiga?

The taiga is a forest biome located in the northern hemisphere. Also known as boreal forest, the taiga lies south of the Arctic tundra and north of the northern temperate forests.

Winters in the taiga are long and cold, and for much of the year the trees and exposed ground of the region are covered in snow. In the summer the taiga explodes with life as plants and animals make use of the short growing season.

The taiga is not as biodiverse as the temperate forest biome that lies to its south. Its landscape is dominated by just three main types of tree: spruces, larches and pines. These hardy conifers are better adapted to life in the cold north than broadleaved trees.

Animals that live in the taiga include bears, wolves, wolverines, Canada lynx, moose, elk and beavers. During the short-lived summer, the taiga’s animal population swells as the region is visited by hundreds of migratory bird species.

Where Is The Taiga Located?

The taiga has a circumpolar distribution (i.e. it is found all around the world). Boreal forests stretch from coast to coast across the north of North America, Europe and Asia.

Winters in the taiga are long and cold. A layer of snow covers the ground for many months at a time. Summers, by contrast, are short, warm and humid, giving plants only a small window in which to grow.

Long winters–which can last as long as nine months, and a wide temperature difference between summer and winter, are both characteristics of the taiga biome.

The average annual temperature in the taiga is between −5 and 5 °C (23 and 41 °F) depending on location.

In the interior of Alaska and Yukon and eastern Siberia, the average annual temperature can be as low as −10 °C (14 °F). Permafrost* is often present in these areas.

*Ground that is permanently frozen.

Natural disturbances such as fire, floods, insect outbreaks and snow breakages are common in the taiga. Most boreal forests are relatively young and are home to plant species that are able to colonize open areas quickly after such disturbances.

Seven out of ten of the most common tree species in the biome are considered ‘pioneer species’ (species that are among the first to colonize new areas after a disturbance).

The most significant cause of natural disturbance in the taiga is fire, which is usually caused by lightning strikes. Taiga species such as jack pines–whose cones shed their seeds when exposed to heat–rely on fire to disperse their seeds.

Plants Of The Taiga

Plants Of The Taiga

In the southern parts of the taiga biome, the trees grow close enough to each another to create a continuous canopy overhead. This is known as closed canopy forest.

In taiga further north, the trees grow more sparsely. There is no continuous canopy and lichen grows on the forest floor between the trees. This is known as lichen woodland or sparse taiga.

The soil of the taiga is acidic, and in many regions permafrost under the soil causes the ground to become heavily waterlogged in the spring thaw. Plants that grow in the taiga need to be able to cope with these unfavorable conditions.

The trees most commonly found in the taiga are conifers. Conifers have a number of adaptations that make them better suited to growing in harsh northern climates than broad-leaved trees:

Of these, only the larches are deciduous (despite being conifers, larches shed their needles in the autumn).

The type of tree found in the taiga varies by location. Firs and spruces are the most common trees of the North American taiga, where the climate is (relatively) warm and moist.

In the taiga of Scandinavia and western Russia the Scots pine is predominant, whereas in the harsh conditions of eastern Siberia, larches are the most common trees.

In addition to the conifers, a number of broadleaf tree species can also be found in the taiga. These include birches, alders, aspens, willows, poplars, and rowans. Other broadleaved trees, such as oaks, maples, elms and limes, occur in the southernmost parts of the biome.

The taiga supports a wide variety of mosses and lichens. Mosses are common in the closed canopy zone in the southern parts of the taiga biome, while lichens are a significant component of the ground cover in the northern lichen woodland zone.

Common forest understory plants in the taiga include the lingonberry, Canadian dwarf cornel and azalea. Plants such as cotton grasses, bog rosemary and the cloudberry are common in northern bogs.

Grasses common in the taiga include brome grass and reed bent grass. Aquatic plants in the biome include sedges, pondweeds, waterlilies and algae.

Animals Of The Taiga

The diversity of animal life in the taiga is relatively low due to the harsh winters and lack of available food sources. The animals that are found in the taiga tend to be larger than their southern counterparts; large body size is often an adaption to prevent heat loss.

The largest herbivore found in the taiga is the wood bison. This subspecies of American bison is found in northern Canada and Alaska.

Other large herbivores include the moose, caribou, elk, and roe deer. Small herbivorous mammals found in the region include squirrels, porcupines, voles, beavers, and hares.

The Siberian or Amur tiger is an endangered predator found only in the Russian Far East and Northeast China.

The mammals of the taiga have numerous adaptations for surviving the harsh northern winter. Some, such as snowshoe hares, turn white in winter for camouflage against the snow.

Both hares and lynxes have large feet in proportion to their body size to aid traveling on the surface of the snow.

Some animals, including some squirrels and bears, either hibernate or become torpid in the winter.

Over 300 bird species use taiga as their summer breeding grounds. The majority of these species, including flycatchers, thrushes and warblers, are migratory birds that arrive in the summer to feed on insects.

Fewer bird species are resident in the taiga for the whole year. Overwintering birds include predators such as the Ural owl, golden eagle and goshawk, omnivores such as crows and ravens, and seed-eaters such as the Siberian tit, pine grosbeak and crossbill.

One notable taiga bird is Clark’s Nutcracker. During the fall, this intelligent North American crow caches seeds in over 4,000 locations. It is able to remember the location of these food caches, with amazing accuracy, months later.

The freshwater lakes of the taiga support waterfowl such as the northern pintail and the scoter.

Fish in the taiga need to be hardy because the water is cold and covered in ice during the winter. Fish species found in the taiga include the Alaska blackfish, the northern pike, and the Arctic lamprey.

Although the taiga supports relatively few insect species, under suitable conditions their population sizes can be large.

Notable insects found in the taiga include wood-boring beetles, mosquitoes, and biting flies. A number of moths and butterflies have adapted to feeding on the leaves of boreal trees.

In the summer, clouds of mosquitoes can be seen in swampy areas. Although the adults die in the first frosts, their eggs survive in the swamps, even in freezing conditions.

The taiga biome is a vast northern wilderness characterized by conifer forests, snow cover for much of the year, long winters and a short growing season.

Although less biodiverse than the temperate forests to the south, the taiga is home to a number of familiar animal species, many of which have adaptations for living in a cold climate.

Discover more about our amazing planet: