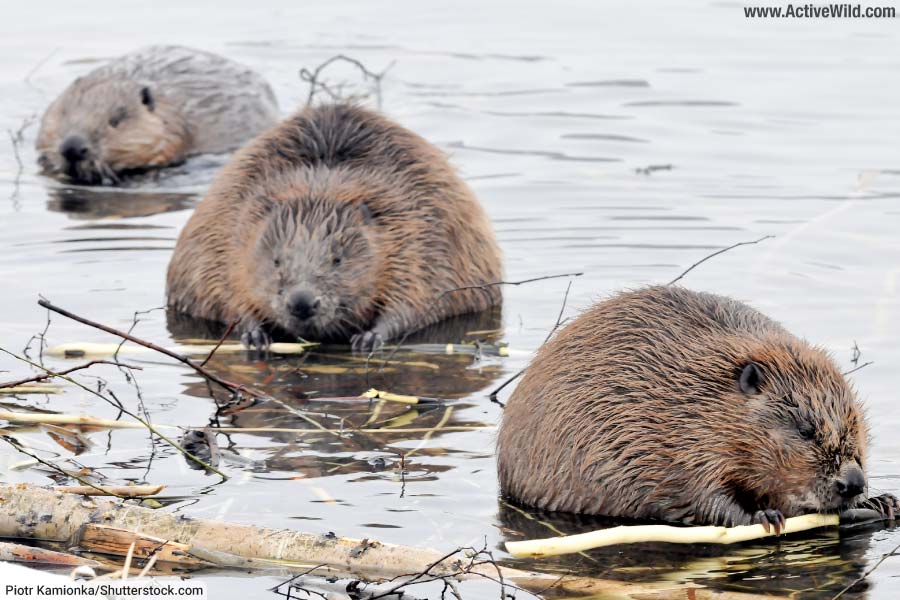 This page contains amazing North American beaver facts for kids (and adults). This animal is part of the Active Wild Online Zoo: information, pictures and videos of all your favorite animals!

Watch the video below to see North American beavers in the wild:

The beaver is famous for being the ‘builder’ of the animal world. Using its extra-strong, self-sharpening front teeth, the beaver can cut down trees and harvest branches. With these it constructs dams and homes which are known as ‘lodges’.

The North American beaver is the largest rodent in North America. It grows to over 1m (3.3 ft.) in length and up to 32 kg (70.5lb) in weight; some individuals grow even larger still.

The beaver’s coat is dark brown. The coat has two layers: a thick, protective outer layer, and a thin, insulating inner layer. Glands in the beaver’s skin produce an oily substance that keeps the coat waterproof.

The beaver’s large scaly tail is used for steering and propulsion when in the water. The beaver also slaps its tail on the surface of the water to alert others of danger.

The beaver has webbed hind feet for swimming. Its smaller, unwebbed front paws are used for digging, and for holding objects and food.

When diving, the beaver closes its nose and ears with waterproof flaps. It protects its eyes with special transparent eyelids which allow the beaver to see where it is swimming.

Like all rodents, the North American beaver’s front incisors never stop growing. This means that the beaver can gnaw on as much wood as it likes and its teeth will never wear down!

The beaver is a herbivore (plant-eater). Its diet consists of buds, leaves, bark, roots, water lilies and woody shrubs.

During the autumn, beavers build up a store of branches that provide food during the winter.

The North American beaver is one of two species of beaver, the other being the Eurasian beaver, Castor fiber. Although the two species are broadly similar, there are a number of small differences between them, including the shape of their skulls and the color of their coats.

A North American beaver and a Eurasian beaver are unable to have offspring together.

Eurasian beavers are found across northern Europe, from the UK in the west to Russia in the east.

The beaver builds its dams out of trees and branches that it has felled itself. The dam is a large structure that is built across a river. It prevents the river from flowing, and creates a pool of deep, slow-moving water.

This pool provides a place of safety for the beaver, as it can dive under the water to escape from predators. The pool also provides a suitable place in which the beaver can build its home, which is called a lodge.

A beaver’s lodge is made from sticks, mud and stones. This ingenious structure can only be entered from under the water. In the lodge is a dry chamber that is above the waterline.

Beavers pairs mate for life, and their young – known as ‘kits’ – stay with them for up to two years. The family group, which consists of the parents and between 2 and 10 young, lives and works together, although the young beavers spend much of the time playing!

The beavers is very territorial, and scent-marks its territory to warn off strangers.

North American beaver predators include wolves, coyotes, cougars, wolverines and black bears. The young may be targeted by smaller predators such as foxes and eagles.

Is The North American Beaver Endangered?

From the early 17th Century to the mid-19th Century, the North American beaver was hunted almost to extinction for its fur, which was used to make top hats and other items of clothing.

Since protective measures were introduced in the late 19th century, the beaver has made a comeback. Its conservation status today is ‘Least Concern’.

Q1. What countries is the North American beaver found in?

Q2. What type of animal is a North American beaver?

Q3. What is a beaver’s home called?