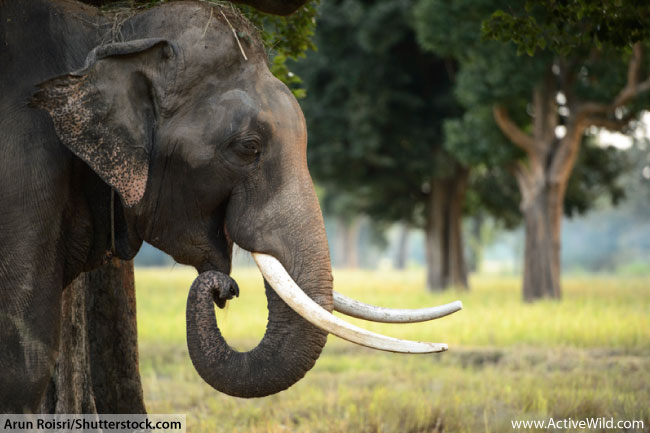 This page contains amazing Indian elephant facts for kids (and adults). This animal is part of the Active Wild Online Zoo: information, pictures and videos of all your favorite animals!

Watch the video below to see an Indian elephant in the wild:

The Indian elephant is one of three subspecies (types) of Asian elephant. It is found in India and other Southeast Asian countries.

This large, intelligent mammal is not just an important part of the ecosystem; it is also an important religious and cultural symbol.

Sadly, the Indian elephant is an endangered species. This is a consequence of habitat loss and of poaching. We’ll find out more about its endangered status further down the page.

Elephants are the largest land animals alive today. Due to their size, long trunks, and ivory tusks, they are among the world’s most recognizable animals.

(Until recently there was only one recognized species of African elephant. Many scientists now think that there are two separate species: the African bush elephant, and the African forest elephant.)

The Indian elephant lives in mainland Asia. The other two subspecies of Asian elephant, the Sri Lankan and Sumatran elephants, are found on the islands of Sri Lanka and Sumatra, respectively.

The Indian elephant is smaller and has paler skin than the Sri Lankan elephant, but is slightly larger and darker than the Sumatran subspecies.

Difference Between Indian And African Elephant

The Asian elephant is smaller than the African elephant, and has smaller ears. There are a number of other differences between the species.

What Does An Indian Elephant Eat?

Indian elephants are herbivores. They eat grass, bark and leaves, and spend 18 to 20 hours a day either feeding or looking for food.

The Indian elephant lives in grasslands and forests. It is never found far from a source of water.

Female elephants live in herds, while males are more independent, living mostly on their own, and occasional forming small groups with other males.

Every year, male elephants undergo a condition known as ‘musth’. Elephants in musth become more aggressive, and fight each other (and anything else foolish enough to get in their way) to impress the females.

Females are pregnant for between 18 and 22 months. They usually give birth to a single calf, but occasionally have twins. Calves are fed with their mother’s milk for up to three years.

The Indian elephant’s trunk is really a continuation of its nose and upper lip. This muscular organ can lift heavy weights, gather food, spray water, and be used to make trumpeting sounds to communicate.

The male Indian elephant’s tusks are both fearsome weapons and useful tools. Their uses include: digging, stripping bark from wood and pushing objects around.

Yes, the Indian elephant is an endangered species. Its population is fragmented (split into separate small groups) and getting smaller every year. This is due to habitat loss and ivory poaching.

In 2003, the maximum number of Indian elephants in the wild was estimated to be just over 50,000 – the size of the crowd at a Premier League football match.

Q1. How many subspecies of Indian elephant are there?

Q2. At a zoo, you see an elephant with light patches on its skin. You also notice that it doesn’t have tusks. What kind of elephant is it?

Q3. What is the conservation status of the Indian elephant?