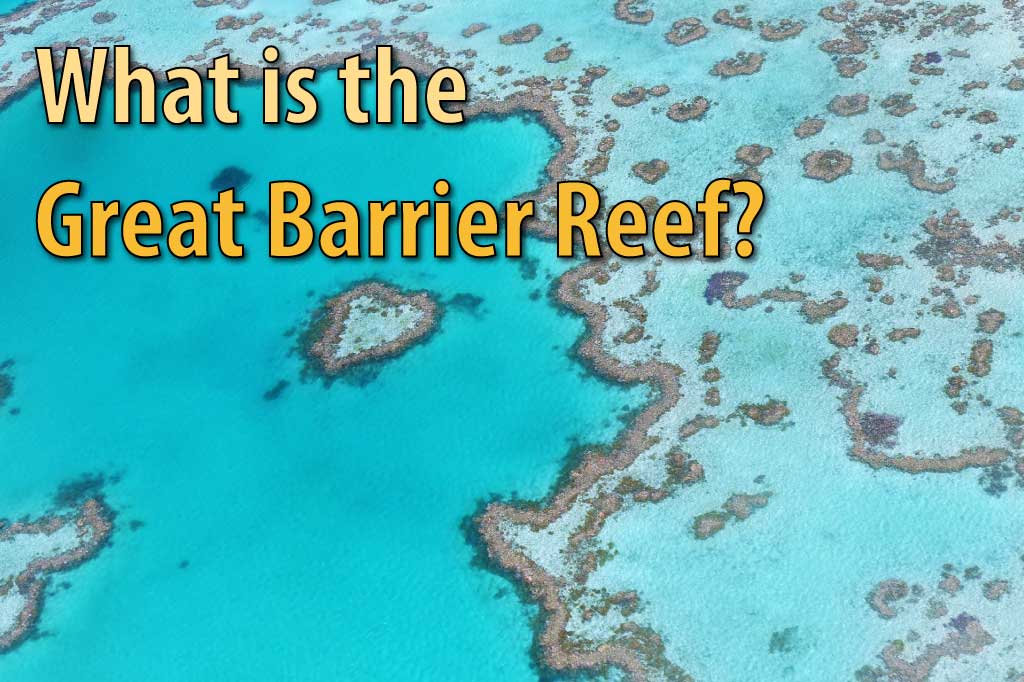 What is the Great Barrier Reef? On this page we’ll take a look at one of the planet’s most famous locations, finding out what it is, where it is, and why it is considered to be one of the world’s most important marine habitats…

What is the Great Barrier Reef? Introduction

How Big Is The Great Barrier Reef?

What Is A Coral Reef?

How Does A Coral Reef Form?

The Different Types of Coral Reef

How Old Is The Great Barrier Reef?

Who Owns the Great Barrier Reef?

Why Is the Great Barrier Reef So Important?

How Are We Damaging the Great Barrier Reef?

What Can We Do to Save the Great Barrier Reef?

What is the Great Barrier Reef? Introduction

The Great Barrier Reef is the world’s largest coral reef system and has been named as one of the Seven Natural Wonders of the World. It is home to countless marine organisms, from whales to the tiny corals themselves, out of whose bodies the reef is made.

(We’ll find out both how coral reefs are formed, and the species that live on and around the Great Barrier Reef, further down the page.)

The Great Barrier Reef is a popular holiday destination and is visited by around two million people every year.

The Great Barrier Reef’s high biodiversity makes it one of the world’s most valuable habitats. It became a UNESCO World Heritage Site in 1981.

How Big Is The Great Barrier Reef?

The Great Barrier Reef covers around 344,400 square kilometers (133,000 sq. mi). It runs alongside the northeastern coast of Australia, stretching southwards from the Torres Strait to a point just north of Fraser Island; a total distance of more than 2,300 km (1,428 miles).

If the Great Barrier Reef was in North America, it would reach from Vancouver all the way down to the north of Mexico. It’s twice as big as Florida, and 100,000 km2 larger than the UK.

The Great Barrier Reef is the world’s largest single structure formed by living organisms. Its great size means that it can even be seen from the moon!

You can see the reef on the interactive map below:

What Is A Coral Reef?

A coral reef is a natural structure formed out of the remains of sea animals called corals. Corals are invertebrates in the same group of animals – Cnidaria – as jellyfish and sea anemones.

There are two main types of coral: Alcyonacea – the soft corals; and Scleractinia – the hard corals. It is the hard corals – in particular a group called hermatypic corals – whose bodies eventually form coral reefs.

How Does A Coral Reef Form?

For a short period at the beginning of their lives, some hermatypic corals exist as free-swimming larvae. The larvae attach themselves to a suitable hard surface, whereupon they metamorphose into polyps.

Polyps are tube-like forms with one end that is permanently attached to an underwater surface. At the other end is a mouth surrounded by tentacles.

Each polyp secretes a substance known as calcium carbonate, which forms a hard exoskeleton in which the polyp lives.

Reef-building corals in polyp form are able to produce exact clones of themselves. These clones – called buds – remain attached to the parents. This process repeats itself and the colony gradually grows.

Under the right conditions, a coral colony can grow several centimeters a year.

When the individual polyps die all that is left is their hard exoskeletons. Over the years these build up in their thousands to create the structures known as coral reefs.

Many corals live in partnership with algae known as zooxanthellae, which live inside the corals’ tissue. Although coral polyps eat plankton that they capture with their tentacles, the majority (up to 90%) of their energy comes from the by-products of photosynthesis by the algae.

The relationship is also beneficial to the algae, which gain carbon dioxide and other useful substances from the coral.

The Different Types of Coral Reef

There are three main types of coral reef: fringing reefs, barrier reefs and atoll reefs. As its name suggests, the Great Barrier Reef is a barrier reef.

How Old Is The Great Barrier Reef?

It is thought that the limestone base on which much of the reef is located is itself formed from the remains of earlier reefs.

Who Owns the Great Barrier Reef?

The Great Barrier Reef is owned by Australia and managed by the following authorities:

Man’s relationship with the Great Barrier Reef goes back around 40,000 to when when Aboriginal Australians first arrived in the area. Torres Strait Islanders have also inhabited islands in the region for around 10,000 years.

Among the first Europeans to discover the Great Barrier Reef were French admiral Louis de Bougainville (Wikipedia), who came across the reef during a 1768 exploratory mission, and legendary British explorer Captain James Cook (Wikipedia), who arrived two years later.

Coral reefs are known as the ‘rainforests of the sea’ due to their high biodiversity. The Great Barrier Reef is no exception, supporting a vast volume of life, including:

(Click on animal names to find out more about them at Active Wild.)

Why Is the Great Barrier Reef So Important?

The Great Barrier Reef’s biodiversity is reason enough for it to be considered an exceptionally important area, but there are several other reasons why it should be protected.

The Reef protects a significant part of Queensland from tidal erosion and the potential damaging effect that tropical storms would have on the coastline.

It provides homes and shelter for the 1000s of different species of marine organisms. It also provides protection for the homes of people on the coastline, which, if not for the Great Barrier Reef, would be damaged by tropical storms.

Coral reefs absorb carbon dioxide to help create exoskeletons. In this way, they work like trees, helping to decrease the rate of global warming.

Even if we look at the Great Barrier Reef from a purely financial aspect, according to Deloitte Access Economics, the Reef makes an economic contribution of 6.4 billion Australian dollars per year to the Australian economy and has an overall value of $56 billion. Just as importantly, it supports the livelihoods of around 69,000 people.

How Are We Damaging the Great Barrier Reef?

Industrialization, fishing, tourism and the use of harmful chemicals in household products all have a serious detrimental effect on the Great Barrier Reef.

As we found further up the page, corals live in partnership with algae. When the sea gets too warm, the corals expel the algae from their bodies, causing the corals to turn white. This is a sign that the corals are under stress. If the situation isn’t rectified, the corals will eventually starve.

Studies have found that in 2016 alone between 29% and 50% of the Great Barrier Reef’s coral was killed.

The crown-of-thorns starfish (Acanthaster planci) is a large starfish whose body is covered with sharp, venomous spines. It is found throughout the Indo-Pacific region and is common in the oceans around Australia.

The crown-of-thorns starfish is a voracious eater of coral, able to consume 6 square metres (65 sq ft) in a year.

What Can We Do to Save the Great Barrier Reef?

While the state of the Great Barrier Reef (and coral reefs in general) is perilous, we can still do our bit to help. Here are 10 ways that you and your family can make a difference:

Although the Great Barrier Reef is nearing the point of no return, we can all do our bit to help save this unique marine ecosystem!

3 thoughts on “What is the Great Barrier Reef? Discover One Of The World’s Most Important Marine Ecosystems”