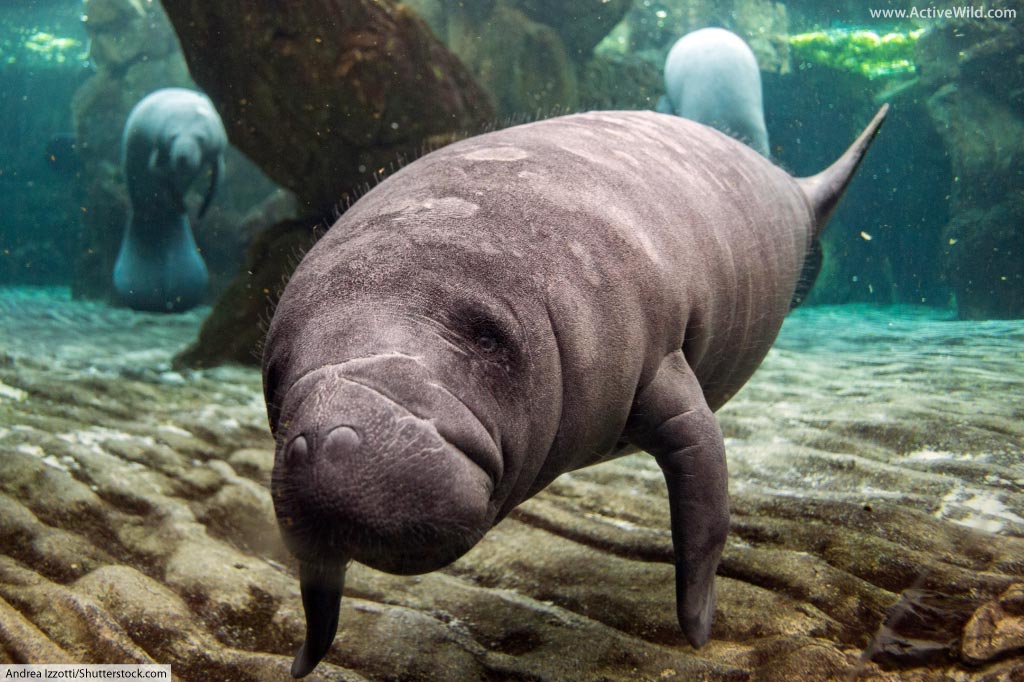 Manatees are large aquatic mammals found both in the Americas and in Africa. Due to their herbivorous diet and docile demeanor they are also known as sea cows. This page contains manatee facts, pictures and information…

Manatee Facts At A Glance

Manatees are large, docile aquatic mammals. There are three species of manatee. They are in the order Sirenia along with the dugong and the extinct Steller’s sea cow.

Although manatees and the dugong share many similarities with marine mammals such as seals, their closest living relatives are elephants.

The three species of manatee are:

The West Indian manatee is further divided into two subspecies:

Manatees are large, streamlined animals with round, barrel-shaped bodies and small heads. They have a pair of paddle-like front flippers and a powerful spade-shaped tail. Their eyes are small, and they have no visible external ears. The muzzle is large and downwards-pointing.

Manatees are gray or grayish brown in color. Their thick, wrinkled skin is sparsely covered in hair. Manatees often have patches of green algae growing on their skin.

Manatees have poor eyesight. To compensate for this, their faces and bodies are covered with sensitive, whisker-like hairs known as vibrissae, which help them navigate their underwater world.

Manatees do not have blowholes like whales and dolphins. Instead, they breathe air via their nostrils, which seal tightly shut when the manatee dives.

Like whales and dolphins – but unlike seals – manatees are fully aquatic, and never leave the water.

Where Do Manatees Live?

The West Indian manatee is found in the West Indies, in coastal areas of the Caribbean and the Gulf of Mexico, and along the east coasts of both North and South America from Georgia in the USA to Brazil.

The Amazonian manatee is found in the Amazon River and its tributaries in South America.

The West African manatee is found in coastal areas and rivers of western Africa.

West Indian and West African manatees are able to live in both sea water and fresh water. They are found in a range of coastal and estuarine habitats as well as in rivers and canals.

The Amazon manatee is found only in freshwater river systems.

Manatees are sensitive to cold. In areas in which the temperature drops significantly in winter, manatees migrate to warmer waters or seek refuge in natural warm springs or waters heated by power plants.

Manatees are usually solitary. Temporary groups can form in warm water refuges and in areas rich in food. Groups of males may form around receptive females.

Manatees can be active at any time of day. They typically spend around half of the day sleeping and most of their waking hours grazing. They are able to stay submerged for up to 20 minutes, but usually come to the surface to breathe every three to five minutes.

Some manatee populations are migratory. Florida manatees migrate to warmer waters during winter, while Amazonian manatee migrations are prompted by rising and falling water levels linked to the rainy and dry seasons.

Manatees communicate using a wide range of sounds (including squeaks, grunts and chirps) as well as by touch.

How Fast Can A Manatee Swim?

Manatees breed throughout the year. Male manatees form temporary mating herds around receptive females. These herds can contain up to 20 individuals.

Manatees give birth underwater. After giving birth the mother assists the newborn calf to the surface so that it can breathe. The calf is able to swim independently within an hour.

Female manatees nurse their young for 12 to 18 months. Mother and calf form a strong bond, staying together for up to two years.

What Do Manatees Eat?

Manatees are herbivores. They are known to consume over 60 different species of freshwater, marine and shoreline plants (including water weeds, sea grasses, floating plants, and mangrove leaves) as well as algae.

The manatee has large, prehensile upper lips which are capable of manipulating and tearing vegetation. The manatee also uses its flippers to move food towards its mouth.

Inside the manatee’s mouth are four rows of flat teeth. The animal’s diet of tough vegetation means that its teeth wear down rapidly. Worn teeth are shed, with replacements being formed continuously throughout the animal’s lifetime. The new teeth appear at the back of each row and gradually migrate forwards.

A manatee consumes up to 15% of its own body weight in food every day. Its unusually long intestine contains symbiotic bacteria which helps digest large quantities of cellulose-rich food.

All three manatee species are rated ‘Vulnerable’ by the IUCN.

The main threats faced by manatees include: