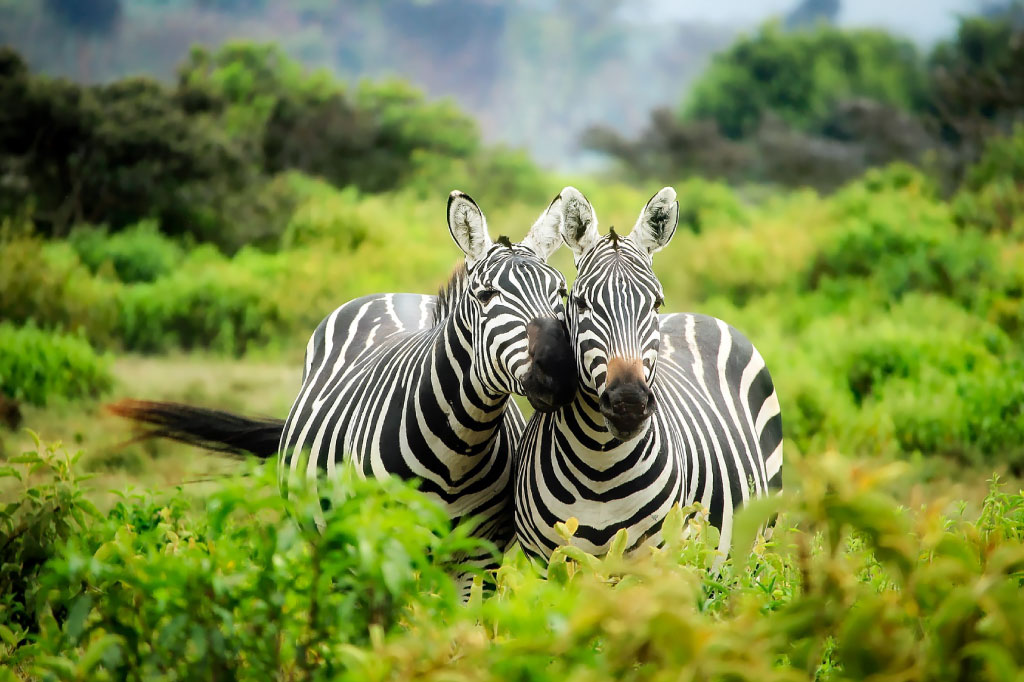 With its bold black and white stripes, the plains zebra is one of the most distinctive animals of the African savanna. It is the commonest and most widespread of the three zebra species. On this page you’ll find plains zebra facts, pictures and in-depth information…

Plains Zebra Facts At A Glance

The most distinct characteristic of the plains zebra is its bold black and white stripes. No two zebras’ stripes are the same.

The stripes are vertical on the neck and mid-section and horizontal on the rump and legs. In some populations, brownish ‘shadow’ stripes are common.

Unlike both the mountain zebra and Grévy’s zebra, the plains zebra has a striped belly.

The plains zebra has a short and stiff mane, upright ears and a black muzzle. The tail is around 50 cm (20 in) long and ends in long, black hairs.

In the video below you can see zebras crossing a fast-flowing river. Don’t worry; there aren’t any crocodiles!

Where Is The Plains Zebra Found?

The plains zebra is patchily distributed throughout eastern and southern Africa. The species’ range extends to Ethiopia and Sudan in the north, Angola and Namibia in the west and South Africa in the south.

The plains zebra is highly social. The species typically lives in groups known as harems, which comprise a single stallion and up to six mares and their immature offspring.

Males without harems live in male-only ‘bachelor’ groups. Harems and bachelor groups often come together to form large herds that can contain hundreds of individuals.

The bonds within groups are strong, especially between mares and their offspring. Social bonds are maintained with regular contact and grooming.

Many zebra herds make seasonal migrations for food and water. Migrating herds can travel up to 1,100 km (700 mi) per year. Plains zebra herds also commonly mix and migrate together with other species such as wildebeest.

Six different plains zebra calls have been recorded, including a shrill ‘kwahaah’ alarm call.  Other calls are used for greeting and to signal pain and distress. 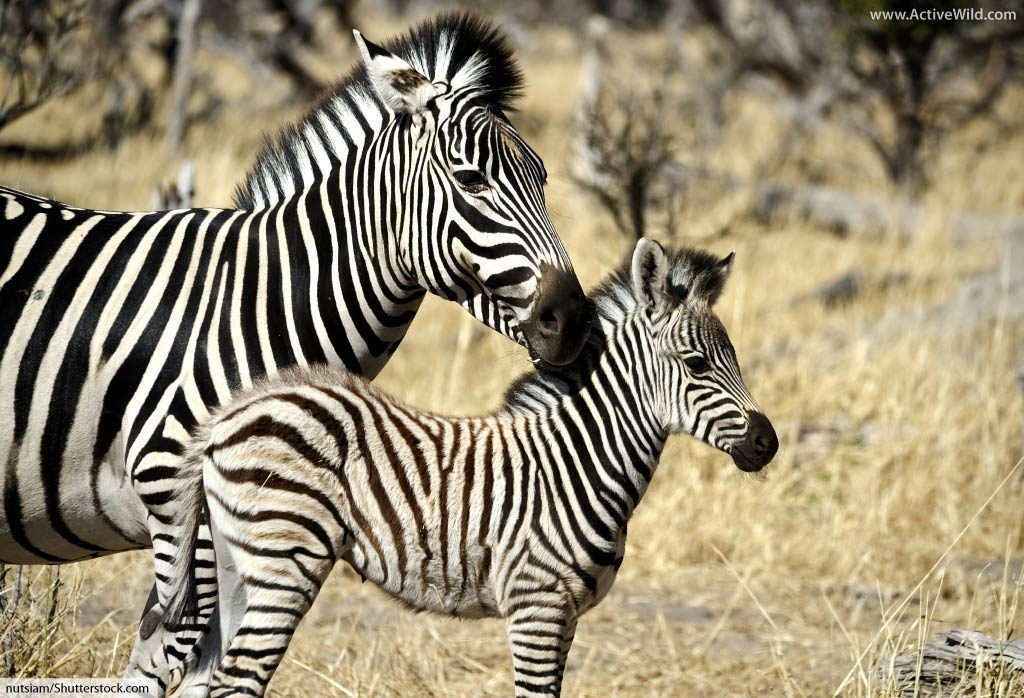 The plains zebra can breed at any time of the year, but mating tends to peak during the rainy season (between October and March). Usually, only stallions with a harem have access to females.

Harems are usually very stable, with the male only being displaced by another if it becomes unhealthy. Most fighting between stallions is over sexually mature mares who have not yet become pregnant.

When a mare is ready to mate it adopts an ‘estrous posture’. This attracts interest from outside males who attempt to ‘abduct’ the mare from its natal group. After becoming pregnant, a mare rarely leaves a harem.

Mares have their own hierarchy within the family group. The stallion typically mates with the highest-ranking female first. The last mare to join the harem has the lowest rank.

The plains zebra has a gestation period of about 12 to 13 months. The mare gives birth away from the harem in a secluded place hidden from predators. Mares usually give birth to a single foal, although twins occasionally occur.

A newborn zebra weighs around 32 kg (71 lb.) and has a shaggy coat with brown stripes. It is able to stand within minutes and begins to walk within an hour. Within a week it will begin to graze. The foal is weaned at between 7 and 11 months of age and is ready to leave the natal harem at between 1 and 3 years of age.

What Do Plains Zebras Eat?

The plains zebra is herbivorous. Its diet consists almost completely of grasses, together with small quantities of browse (herbs, shrubs, leaves, shoots, and twigs) for added protein.

When eating, the zebra clips grass using its lower incisors and upper lip, then grinds the tough plant material with its large molars. Symbiotic bacteria in the zebra’s digestive system help break down the fibrous plant matter.

Lions and spotted hyenas are the most common predators of the plains zebra. The animal may also fall prey to the Nile crocodile when crossing rivers while migrating.

Young foals are especially vulnerable to predation, and may be targeted by cheetahs, leopards, African wild dogs and even olive baboons.

The plains zebra is often able to outrun larger predators such as lions. The stallion will protect his harem from predators by kicking and biting, while mares actively defend their foals. A harem will always have one individual on guard while the other members of the group sleep.

Is The Plains Zebra Endangered?

The plains zebra is rated ‘Near Threatened’ by the IUCN. The species’ total population is estimated to be over 500,000 individuals. The species is found in several protected areas, including the Serengeti National Park, and no major threats to the population as a whole have been identified.

However, there have been population declines in 10 of the 17 countries in which the plains zebra is present. The main causes for these declines include: hunting for meat and hides, habitat loss due to expansion of farming, and competition with livestock for food.