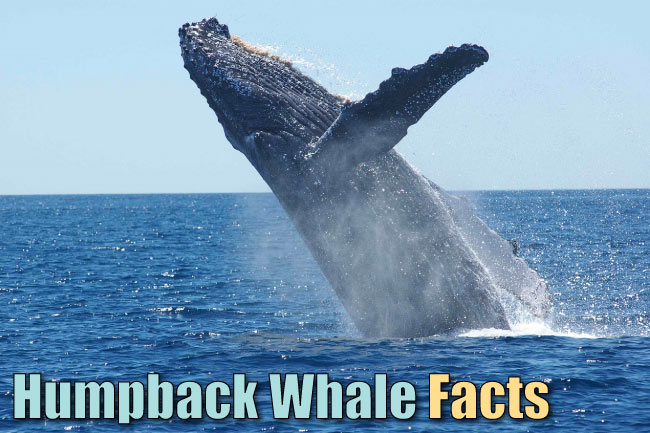 In-depth humpback whale facts for kids, student and adults. Learn about this distinctive marine mammal, famed for its spectacular leaps and mysterious song.

Humpback Whale Facts at a Glance

Watch the amazing video below to see Humpback Whales in the wild:

The humpback whale is one of the most familiar whales. Its has a number of distinctive features, which include: extra-long pectoral (side) fins; bumps on its head and lower jaw; a streamlined shape; and an area of heavily grooved skin below its mouth and along its chest.

The humpback whale is famous for its spectacular ‘breaching’ behavior. This involves the whale launching itself out of the water and returning with a huge splash!

The humpback whale’s back can appear to be humped, which is how the whale got its English name.

The humpback whale’s scientific name, Megaptera novaeanglia, means ‘big-winged New Englander’. This refers to the whale’s long pectoral fins (its ‘wings’) and to the fact that the whale was at the time associated with the New England coastline.

The humpback whale is known for its songs. These long, complex sounds are produced by male whales, and can be heard many miles away.

The humpback whale is a baleen whale. Baleen whales are also called Mysticeti. They are one of the two main groups of whales. The other group is the toothed whales (Odontoceti).

The humpback whale is a member of the Balaenopteridae family. Members of this family are also called ‘rorquals’.

Rorquals can be recognized by the folds of skin under their mouths. The grooves allow the mouth to expand in order to take huge gulps of food-filled water when the whale is feeding.

How to Recognize a Humpback Whale

The humpback whale is dark gray / black on its back, and mainly white on its front.

The humpback whale’s most distinctive feature is its long pectoral fins. (Pectoral fins are the fins found on either side of a whale or fish’s body.)

The humpback’s pectoral fins can be a third of the length of the whale’s body (up to 4.6 m / 15 ft.) – the longest limbs of any mammal! The front of each pectoral fin is heavily ridged.

Rounded bumps called tubercles cover the humpback whale’s head and lower jaw. Each of these is a hair follicle containing a stiff hair. It is thought that these may provide the whale with sensory information such as movement in the water.

How to Tell Humpback Whales Apart!

The undersides of the humpback whale’s large flukes have distinctive white markings. (The word ‘flukes’ is used to refer to the tail fins of whales and dolphins.) Individual whales can be identified by these markings.

While not as large as fellow rorquals the blue whale and the fin whale, the humpback whale is still one of the largest animals alive today. It grows up to 19 m (62 ft.) long, although most are shorter.

Where Does The Humpback Whale Live?

Humpback whales are found throughout the world’s oceans. There are several distinct humpback whale populations, and these tend not to mix.

The North Atlantic and North Pacific humpback whale populations spend the summer in their northern feeding grounds. The Southern Ocean populations spend summer feeding in the cold southern waters. In the winter all of the populations migrate to warmer waters nearer the Equator, where they mate and give birth.

Humpback whales undergo one of the longest migrations of all mammals. They are known to travel up to 16,000 miles (25,000 km) in one year.

For a time a group of humpback whales held the record for the longest mammalian migration after traveling around 8,300 km (5,200 mi) from the Pacific coast of Costa Rica to the icy waters of Antarctica.

Not all humpback whales migrate. A small population remains in the Arabian Sea all year round.

The humpback whale is a favorite on whale watching safaris on behalf of its spectacular surface antics.

Humpback whales frequently ‘breach’, throwing themselves partially (sometimes almost fully) out of the water and returning with a tremendous splash.

Spyhopping is when the whale ‘treads water’ with its head and shoulders held out of the water. This lets the whale see what’s going on above the surface!

Pec-slapping and tail slapping involve the whale coming to the surface and slapping either its pectoral fins (side fins) or flukes (tail fins) against the surface, making a huge splash. This may be a means of communication between humpback whales.

Penduncle throwing involves the whale throwing the rear half of its body and flukes out of the water in a powerful motion. It may be a sign of aggression against other humpback whales.

The humpback whale is famous for its song. This consists of complex series of moans, whoops and cries that lasts between 10 and 20 minutes. Humpback whales will repeat their songs continuously for many hours. Humpback whale song can be heard 20 miles (32 km) away.

You can hear the whale’s mysterious song in the video below:

All of the whales in a single population sing the same song. Over time the song gradually changes.

No one really knows why whales sing. It may be a means of attracting females, issuing a challenge to other males, or establishing dominance.

The humpback whale feeds on krill (a small shrimp-like crustacean that is eaten by many whales), and various small fish such as herring.

The humpback whale eats by taking a huge mouthful of food-filled water. The water is then expelled through the comb-like baleen plates in the top of the whale’s mouth. Any food in the water is caught in hair-like bristles that project from the baleen plates. The food is then swallowed.

Humpback whales utilize a variety of hunting methods. One of these is bubble net feeding. This involves a group of whales forcing a shoal of fish into a tunnel created by bubbles blown by the whales. When the fish are herded into a sufficiently small area the whales swim through the shoal, taking thousands of fish at a time.

How Much Food Do Humpback Whales Eat Per Day?

Humpback whales congregate in warm equatorial waters during the winter after their long migration from northern and southern Polar Regions.

Despite their peaceful reputation, the whales can become aggressive during the breeding season. Males will form groups around a female and fight each other for the right to mate with her.

Females give birth around 11.5 to 12 months after mating, and have a calf every 2 to 3 years. Being mammals, the mothers feed their young with milk produced by glands in their own bodies.

The calves feed on their mothers’ milk for around a year before they start catching their own food. Humpback whales reach sexual maturity at between 6 and 10 years old.

The lifespan of a humpback whale is around 50 years.

Is The Humpback Whale Endangered?

Despite being hunted almost to extinction, the humpback whale is now making a comeback, and is now rated ‘Least Concern’ by the IUCN.

We hope that you have enjoyed learning about these incredible marine mammals. Here is a selection of other articles you may be interested in …