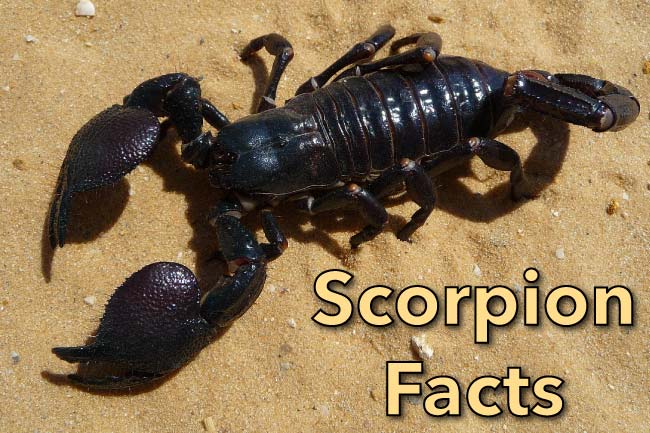 Scorpions are arachnids in the order Scorpiones. They have eight legs and segmented, armor-plated bodies. Scorpions are armed with two formidable pincers to the front and a venomous stinger at the end of their curled tails.

What Type Of Animal Is A Scorpion?

Scorpions are arachnids: members of the class Arachnida. Other arachnids include spiders, mites, ticks, harvestmen and solifugae.

(Solifugae, otherwise known as camel spiders, are arachnids that look like a cross between spiders and scorpions. You can find out more about them here: Camel Spiders.)

All arachnids have 8 legs, together with an additional pair of appendages at the front of their bodies known as pedipalps. The scorpion’s pedipalps take the form of pincers.

Arachnids themselves are members of the phylum arthropoda. Animals within this group are known as arthropods. Other arthropods include insects and crustaceans.

Confused by animal groups such as class and phylum? Check out our Animal Classification page and all will become crystal clear!

How Many Scorpion Species Are There?

Scorpions appeared over 400 million years ago, during the Silurian Period. Modern-day scorpions are similar to their ancient ancestors.

Today there are 13 scorpion families containing around 1,400 species and subspecies.

Getting To Know Scorpions!

All scorpions are venomous. The venom, which contains neurotoxins, is administered by a stinger at the end of the scorpion’s tail. This is used to immobilize the scorpion’s prey. The scorpion’s sting also provides a means of defense against predators.

(A scorpion’s head is actually joined to its mid-section in a body part called the ‘prosoma‘. We’ll learn more about the scorpion’s body parts further down the page.)

The median eyes at the top of the prosoma are simple eyes. Instead of being able to make out detail, they are sensitive to light. Some scorpion species are able to find their way around using starlight.

Just as important (if not more important) to a scorpion as its sense of sight is its sense of touch. Hairs on the scorpion’s body, pincers, and legs are extremely sensitive to vibrations and touch. They help the scorpion locate its prey and find its way around.

The hairs also help the scorpion to balance.

With their armored outer skeleton and prominent weapons, scorpions are fearsome-looking animals. Let’s find out more about the scorpion’s tank-like body.

The prosoma is like the fused-together head and thorax of an insect. (The head and the thorax are the front and middle parts of an insect.) This part of the scorpion’s body houses the mouthparts and eyes. It’s also the part of the body to which the pincers and eight legs are attached.

The prosoma is protected by a hard part of the exoskeleton called the carapace.

A scorpion’s mouthparts are known as chelicerae. They are sharp and claw-like. They are used to pull flesh from the scorpion’s victim.

The opithosoma is the arachnid equivalent to the insect abdomen. It has two main parts, the mesosoma and metasoma.

The mesosoma is the wide part of the opisthosoma. It is divided into segments, each with its own armor plate. The mesosoma is where the scorpion’s ‘book lungs’ are located.

Book lungs do not resemble our lungs, but do the same job, that being to extract oxygen from the air and to expel carbon dioxide. They are called book lungs because they resemble the pages of a book.

The metasoma is where waste matter is expelled from the scorpion (which is a polite way of saying it’s where the scorpion’s butt is found!).

The metasoma is also, of course, the location of the scorpion’s fearsome stinger. The stinger is attached to the fifth segment of the tail in a section called the telson. The telson also houses the venom glands, which is where the scorpion’s venom is produced.

Where Do Scorpions Live?

Scorpions are found on every continent except Antarctica. In some parts of the world, such as Japan and England, they didn’t occur naturally, but have been accidentally introduced.

Although scorpions are most often associated with dry desert habitats, they are also found in a wide range of other habitats, including rainforests, coastal areas and mountainous regions.

Most scorpions are nocturnal, and tend to stay away from sunlight. Scorpions dig burrows, and are also found in rocky crevices or hidden under rocks or peeling bark. Some species climb trees. Where scorpions live close to humans, they may even be found in houses and outbuildings!

Scorpions feed on other arthropods, including other scorpions. Larger species will also prey on small vertebrates such as lizards and mice.

Scorpions use their sensitive hairs to detect the vibrations given off by potential prey. Most scorpions lie in wait for their victims to approach. They then pounce, grabbing the victim with their powerful claws. The victim is then crushed, and, if necessary, stung. This either kills or immobilizes the prey, allowing it to be eaten.

Scorpions prefer to subdue their prey by crushing it rather than stinging it.

Scorpions are only able to eat liquid food. They cut off pieces of food with their sharp chelicerae and place it in a special cavity near the mouth. They then send up digestive juices that liquefy the food, allowing it be sucked up.

Scorpions can go several months at a time without eating. When they do eat, however, their meals are large. The eating process can take several hours.

Scorpions have a low metabolism (which means that their bodies don’t use a lot of energy). They are relatively inactive most of the time.

Are Scorpions Dangerous To Humans?

Scorpions can deliver a painful sting. The strength of the venom varies from species to species. A scorpion’s sting is rarely fatal to humans; those most at risk include the very young and the very old.

What Is The Most Venomous Scorpion?

The most venomous scorpion is the deathstalker scorpion of North Africa and the Middle East. Its sting is extremely painful, but usually non-lethal to adults.

The fattail or fat-tailed scorpions are the most dangerous scorpions. Although their venom isn’t as potent as that of the deathstalker, they inject more of it per sting.

The Arizona bark scorpion is the most venomous scorpion in North America.

Despite their aggressive appearance, scorpions often find themselves the prey rather than the predator. Animals such as birds (particularly owls), lizards, rodents, frogs and opossums will all prey on scorpions. Scorpions can also be targeted by other invertebrates such as spiders, centipedes and even other scorpions.

Scorpions ‘Glow in the Dark’

Scorpions can easily be found in the night with the aid of an ultraviolet torch. Scorpions glow a ghostly blue-green when illuminated in ultraviolet light.

Scientists know how scorpions glow (it’s due to the presence of nitrogenous substances in the cuticle). However, no one really knows why scorpions glow like this.

Scorpions have a breeding season. During this time females emit pheromones – airborne chemicals – that attract males.

Before mating takes place scorpions go through a courtship ritual. This involves the male grasping the female in his pincers and leading her in a dance known as a promenade à deux.

Care has to be taken in order that neither stings the other during mating, although males occasionally inject the females with a small amount of venom seemingly deliberately.

Some scorpions are parthenogenetic. This means that mating doesn’t have to have taken place in order for the scorpion to produce offspring.

Scorpions are unusual among arachnids in that they give birth to live young. This is because scorpions are ‘ovoviviparous’. Ovoviviparity is when the young develop within eggs and remain in the mother’s body until they are ready to hatch.

Most species produce between 8 and 25 young in each litter. The female carries the young scorpions around on her back until they have undergone at least one molt.

Scorpions usually molt around 5 to 7 times before reaching their full size. Each stage is known as an ‘instar’: a scorpion in its second instar has molted once (the first instar was after it was born and before the first molt).

How Long Do Scorpions Live?

Scorpions have relatively long lifespans compared to other invertebrates. Depending on the species, scorpions reach maturity after 1 to 3 years, and live for a total of 2 to 6 years.

We hope that you have enjoyed learning about these fascinating animals. You can learn about many other types of animal on the following pages: