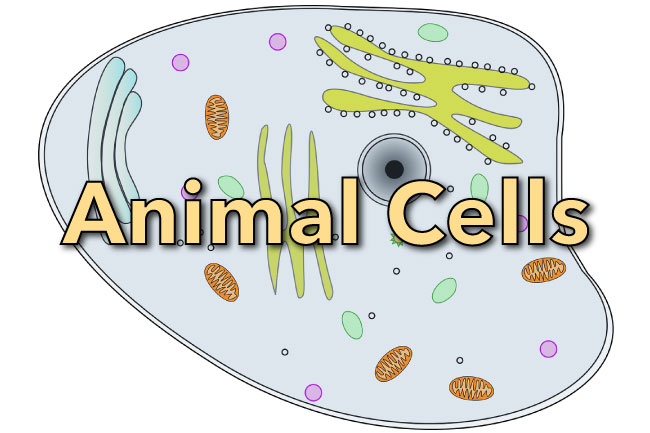 What Is An Animal Cell? Find out about animal cells, and the difference between animal and plant cells.

What Is An Animal Cell?

Don’t worry if this all sounds complicated, by the time you’ve finished this page you’ll be an animal cell expert!

Cells – The Building Blocks of Life

All living things are made of cells. Whether plant, animal or bacterium: if it’s a living organism, it’s made up of at least one cell!

Bacteria and other single-celled, or unicellular, organisms are made of just one cell. Animals such as mammals, reptiles and amphibians can be made up of millions and millions of cells.

The Two Main Types of Cell

Therefore, animals, plants and fungi can be described as being ‘eukaryotic’.

Although animals and plants are both eukaryotic, there are differences between animal and plant cells. We’ll learn about these differences further down the page.

Animal cells are specialized. They have different shapes depending on what job they do within an animal’s body. A nerve cell, for example, looks very different to a fat cell, and both look different to a muscle cell.

The basic parts of the cell, however, remain the same whatever the cell’s function.

Parts of an Animal Cell

All animal cells are made up of various different parts. These parts are called subcellular structures. The parts of a cell that have a specific function are called organelles.

Major Parts of an Animal Cell

Let’s look at each of these in more detail.

All animal cells have a plasma membrane. This is a barrier that surrounds the cell and holds it together. It controls what goes in and out of the cell.

The cell membrane is made of proteins and lipids (fatty substances). It is ‘semipermeable’, which means that some chemicals can get through it, but others can’t.

Most of the organelles within an animal cell are also surrounded by their own membranes.

The nucleus is a big organelle. It controls the activities of the cell. The nucleus contains chemical instructions in the form of DNA.

The cytoplasm is a jelly-like liquid that fills the cell. It contains enzymes that accelerate the chemical reactions that take place within the cell.

The number of mitochondria in a cell depends on the function of the cell. Some animal cells (e.g. red blood cells) contain no mitochondria. Others, such as liver cells, have over 2000.

Ribosomes are very small organelles. They are not surrounded by a membrane. They are where protein is made within a cell.

As we’ve found, animal cells and plant cells are both eukaryotic cells. However, there are several differences between them.

Plant cells have the same organelles as animal cells, but also contain the following additional structures:

Plant cells have a tough cell wall made of cellulose. The plant cell’s plasma membrane is under the cell wall.

Chloroplasts are small, flat organelles found scattered throughout the plant cell’s cytoplasm. They are where photosynthesis takes place. The chlorophyll in chloroplasts gives them a green color.

Chloroplasts are not present in a plant’s root cells and the cells inside its stem.

Most plant cells have a single large vacuole. The vacuole is filled with a liquid called cell sap. This is a weak solution of sugar and salts. The vacuole helps the cell to keep its shape. If a plant doesn’t have enough water, the vacuoles shrink, and the plant wilts.

How Big Is An Animal Cell?

Although most animal cells are far too small to be seen without a microscope, some are much larger. The human egg cell, for example, is visible to the naked eye. Some people consider bird eggs to be single cells. This would mean that an ostrich egg would be the largest known animal cell.

What Is an Animal Cell: Conclusion

5 thoughts on “What Is An Animal Cell? Discover the Parts of a Eukaryotic Cell & the Differences Between Animal & Plant Cells. Facts & Information For Kids & Students.”