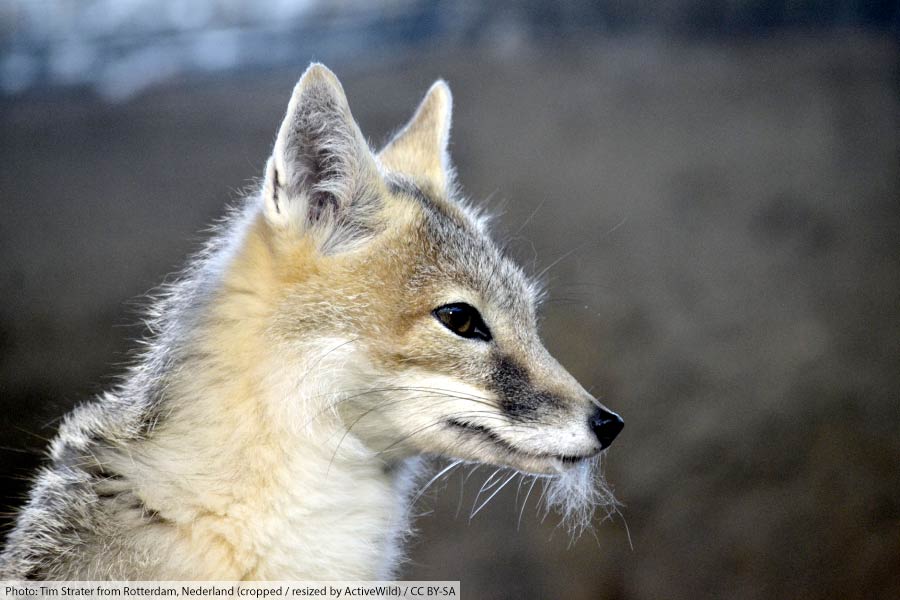 What Is A Swift Fox?

The swift fox is a small fox found in North America. It inhabits grassland habitats in the Great Plains region. A member of the ‘true fox’ genus Vulpes, the swift fox is closely related to the kit fox with which it shares the southern parts of its range.

You can watch footage of a swift fox being re-introduced to its natural habitat in the video below:

Swift Fox Facts At A Glance

How To Recognize A Swift Fox

The swift fox is a small wild dog with the typically bushy tail and pointed ears of a member of the ‘true fox’ genus Vulpes.

The fox’s coat is gray on the back and tail, orange-yellow on the sides and legs, and creamy white on the chest and undersides. There are dark patches either side of the nose.

The bushy tail has a black tip but does not have the distinct black stripe running along its length seen in the gray fox.

The swift fox can be identified by its small size, large ears and the grassland habitat in which it is found. It is smaller than both the gray fox and the red fox (significantly so in the case of the red fox).

Where Is The Swift Fox Found?

The range of the swift fox is centered around the Great Plains region of the North American interior.

The swift fox is abundant in Colorado, Kansas, and Wyoming, and in parts of Texas, New Mexico, and Oklahoma. The species is also present in Montana, Nebraska, and South Dakota.

In Canada, the swift fox is found in southern Alberta and Saskatchewan.

The species was heavily hunted in the past. Although the swift fox is today considered non-threatened, it inhabits only around 40% of its original range.

Dense vegetation and taller shrubs may hinder the small fox’s ability to look out for predators.

Areas with loamy soils (soil composed mainly of sand and silt) are preferred by the swift fox, as they provide favorable conditions for burrowing and den building.

Much of the swift fox’s natural habitat is semi-arid. As an adaptation for living in this habitat the swift fox is able to survive without a ready source of water; it obtains all the water it needs from its prey.

The swift fox is a canid (a member of the dog family, Canidae). It is a member of the genus Vulpes, alongside other canids such as the Arctic fox, kit fox, red fox and fennec fox. Members of this genus are known as ‘true foxes’.

Canidae is one of several animal families in the order Carnivora. This group also contains families such as the cat family (Felidae) and the bear family (Ursidae).

Like most foxes, the swift fox is nocturnal and rarely seen outside of its den during the day. The only exception to this is during the winter, when the fox may be seen resting near its burrow in the middle of the day when temperatures are at their warmest.

The swift fox lives in pairs, either mating for life, or staying with the same partner for a year.

The swift fox’s den consists of a burrow two to four meters in length with an entrance 7 to 9 in. in diameter. The entrance may either be circular or a key-hole shape (a kit fox burrow also has a key-hole-shaped entrance). The burrow’s small entrance allows it to be used as a means of escaping from predators.

Dens used for resting or predator evasion tend to have a single entrance, while those used for raising pups often have multiple entrances.

A swift fox will either dig its own burrow, or convert the deserted burrows of animals such as American badgers and prairie dogs.

Swift foxes are known to use up to thirteen dens in a year. Reasons for changing den include prey scarcity and the build-up of parasites within a den.

The swift fox is able to run at speeds of over 50 km/h (31 mph). This allows the fox both to evade predators and to capture prey.

Like most canids, the swift fox is an omnivore. Its diet consists mainly of meat but is supplemented by plant matter such as grasses and fruit.

The swift fox is an opportunistic hunter and forager, and will eat a wide variety of prey animals.

Its diet includes rodents such as prairie dogs, ground squirrels and mice, together with jackrabbits and cottontails and other mammals. The fox will also eat reptiles, amphibians, fish, birds and insects.

As well as capturing its own prey, the swift fox will also feed on carrion.

The main predator of the swift fox is the coyote. Coyotes will often kill swift foxes without eating them as a means of limiting competition for resources.

Other known predators of the swift fox include the American badger, golden eagle, horned owl and bobcat.

The swift fox is usually out-competed by the red fox in areas where both species are present.

The species’ gestation period ranges from 50 to 60 days. Litters range in size from 2 to 6 pups, with the average litter size being 4.5 pups.

Swift fox pups are born blind and are completely dependent on their mother for the first few weeks of their lives. They are weaned at 6 to 7 weeks of age and will stay with their parents for around 6 months.

Males begin to breed after their first year, while females raise their first family after two years.

Is The Swift Fox Endangered?

The conservation status of the swift fox is currently ‘Least Concern’ and its population is thought to be stable.

Sadly, this has not always been the case. During the late 19th and early 20th centuries the swift fox was persecuted almost to extinction in many parts of its range.

Although the species wasn’t directly targeted, it fell victim to predator control schemes intended to reduce numbers of coyotes and gray wolves.

Conservation schemes in the United States saw the species make a resurgence in many locations.

The swift fox was re-introduced in Canada in a scheme named the Canadian Swift Fox Reintroduction Programme, which ran from 1972 to 1997. (Source)

The scheme saw 932 swift foxes, 841 of which had been raised in captivity specifically for the project, being released in the Canadian Prairies between 1983 and 1997.

The scheme was a success, and today the swift fox is once again resident in Canada.

Despite these successes, the swift fox is only present in around 40% of its original range.