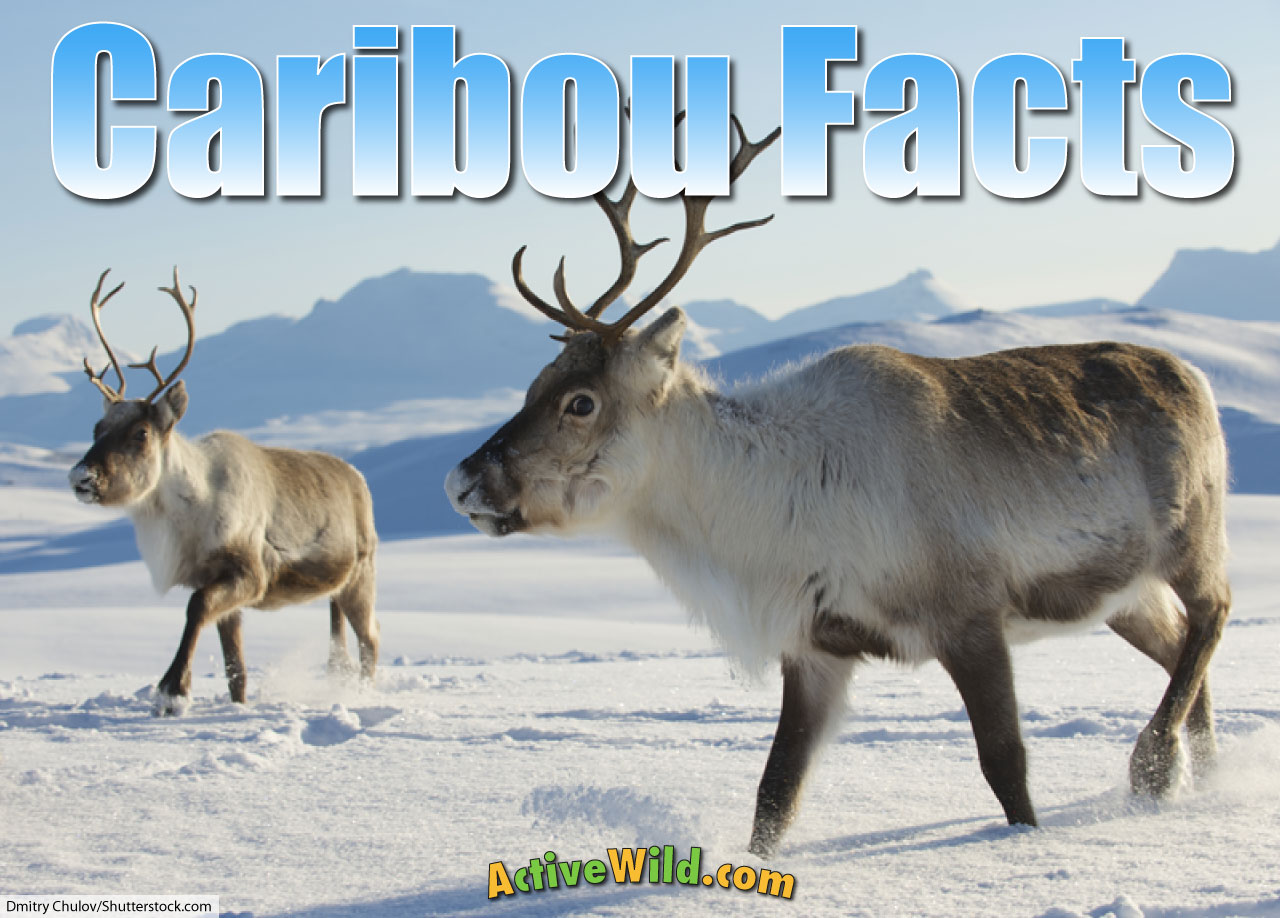 This page contains Caribou facts and information, and is part of our Arctic series.

Caribou are large mammals that live in Arctic and subarctic regions all around the world. Caribou are members of the deer family, Cervidae. Their scientific name is Rangifer Tanandus.

In Europe, caribou are known as reindeer.

Read on for more caribou / reindeer facts for kids (and adults!) … and be sure to watch the amazing video of reindeer in the wild!

Caribou Facts At A Glance 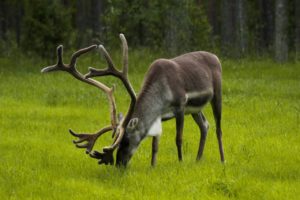 Caribou live In northern and Arctic regions of North America, Europe and Asia.

These cold, harsh environments are home to approximately 2.8 million caribou worldwide. There are fifteen subspecies of caribou. The smallest of these is the Svalbard reindeer, which is found on the Norwegian island group of the same name.

The largest caribou subspecies is the boreal woodland caribou, which is found in Canada and Alaska. (Small populations also exist in Idaho and Washington.)

In 2016, the caribou’s conservation status was changed from ‘Least Concern’ to ‘Vulnerable’. You can find out what caused this further down the page.

How Big Are Caribou?

Typically, domesticated reindeer have shorter legs and are heavier than those living in the wild.

Caribou Adaptations For Living In A Cold Climate

Caribou have several adaptations that allow them to live in the harsh arctic climate. One of the most important is a thick, multi-layered, fur coat. This provides warmth, protection from the elements, and buoyancy when swimming.

Caribou also have a Nasoturbinal bone in their noses. This delicate, curled bone supports thin tissue filled with blood vessels. This warms the air the caribou breathes in before it enters the lungs.

The leg joints of some caribou and reindeer subspecies create a clicking sound as the animal walks.

This signals to the other members of the herd where the reindeer is and whether it is grazing or running. The larger the reindeer, the louder the click, so other reindeer always know who’s nearby.

Both male and female caribou have antlers. The caribou is the only member of the deer family in which females have antlers, although they are not as large as those of the male.

The male caribou has the largest antlers of any deer except for the moose.

Antlers are used for defence against predators and for clearing snow off the ground to expose food.

The Caribou mating season or rut runs from late September until early November. During this time, males compete for access to groups of females. If dominance can’t be established via displays, the males will fight, using their antlers to butt and shove their opponents.

Calves are born in May and June. They can stand within an hour of being born. Within 3-6 hours they can run and keep pace with the herd.

Animals (such as the caribou) that are highly independent shortly after being born are said to be ‘precocial’.

Wild Caribou live in large, migratory herds of between 100 and 250,000 individuals. Smaller, domesticated reindeer herds can be between 50 and 1000 individuals in size and are tended by human herders.

The video below shows amazing footage of a caribou herd:

Herds consist of bulls (males), cows (females), and calves (young). Caribou herds are constantly moving in search of food. Caribou migrate further than any other land mammal; some herds have been documented traveling 5,000 km (3,105 miles) in search of food.

Typically, herds migrate north in the summer as the snows melt, and south in the winter to escape the harsh Arctic winters.

Caribou are herbivores (plant eaters). An averaged size adult caribou requires a minimum of 5kg (11lb.) of food a day to maintain their weight.

In the summer months Caribou graze on grasses, herbs, ferns, and mosses. In winter they forage for lichen and fungi buried underneath the snow. This they uncover with their hooves and antlers.

An important food for Caribou is ‘Reindeer Moss‘, which grows in alpine tundra. Despite its name, it is a lichen, not a moss.

Caribou have a unique enzyme called “Lichenase” which allows them to process lichen for glucose or sugar. This adaptation helps to sustain them through the harsh winters.

Caribou are ruminants (cud-chewing animals). They have a large intestinal chamber called a rumen in which food is processed before being regurgitated as cud and chewed again. This ‘double digestion’ system helps ruminants such as caribou break down tough plant material.

What Does ‘Caribou’ Mean?

The Mi’Kmaq are an indigenous first nations people in Canada. The name “Caribou” comes from the Mi’Kmaq word “qualipu” (pronounced: KAL-i-bu), which means “one who paws”.

The caribou’s conservation status was changed from ‘Least Concern’ to ‘Vulnerable’ in 2016.

Over the last 3 generations, the world population of caribou has fallen by 40%, from just under 5 million to around 2.8 million.

It is thought that this is due to habitat loss and barriers to movement (e.g. roads, livestock fencing, etc.) being constructed across existing habitat. Unregulated hunting may also play a (smaller) part in the recent decline.

The Caribou’s main natural predator is the wolf. During the calving season other predators, such as golden eagles, sea eagles, wolverines, brown bears, and polar bears, may hunt weak or newborn Caribou calves.

During the summer months, caribou herds are plagued by biting flies. Caribou will travel to higher elevations to escape these pests.

Humans started hunting caribou for food and hides during the Mesolithic and Neolithic periods. Evidence shows early domestication of Reindeer in Scandinavia and northwestern Asia around 2,000 years ago.

Caribou / reindeer historically have been very important to native groups, including the Inupiat people in Alaska, the Inuit people in Canada, the Sami people in the northern reaches of Scandinavia, and the Chukchi people of northern Russia and Siberia.

Native peoples used the caribou for food, clothing and shelter. European Reindeer were imported to North America in the late 1800’s for domestication, but most efforts failed as native peoples preferred to hunt the wild Caribou.

We hope that you have enjoyed reading about the caribou / reindeer.

6 thoughts on “Caribou Facts, Pictures & Information. All You Need To Know About The Caribou / Reindeer”