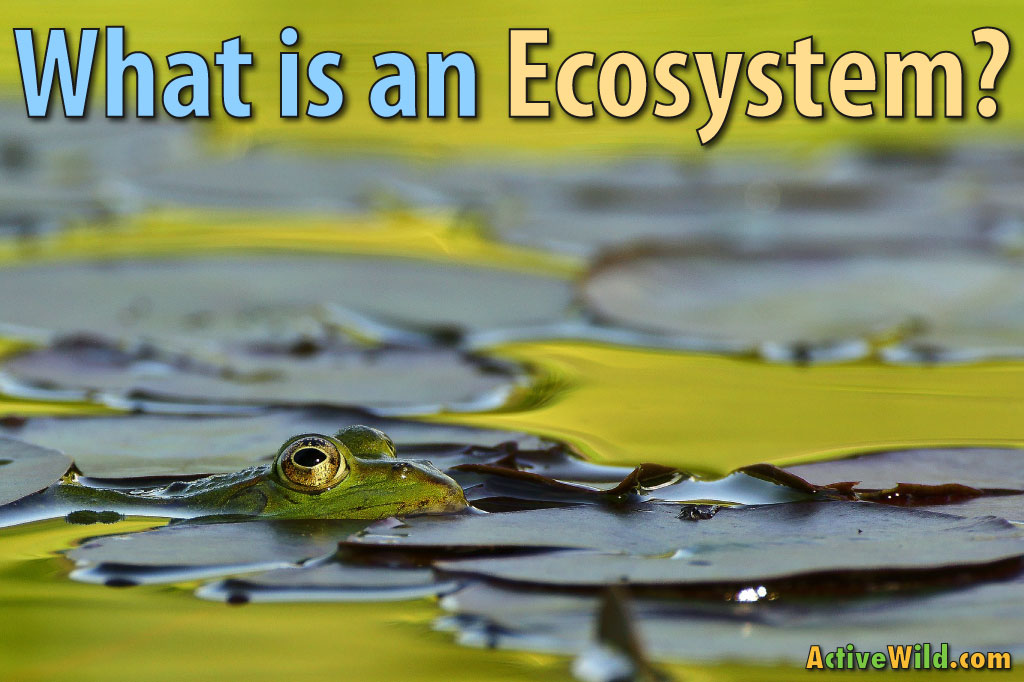 On this page we ask ‘what is an ecosystem?’, and explore the various different types of ecosystem present on Earth. In addition, we take a look at the roles that different organisms play within an ecosystem, and compare ecosystems to biomes.

Let’s take a look at the fascinating world of ecosystems…

What is an Ecosystem?

An ecosystem is a biological system that is made up of a community of organisms (animals, plants, fungi, and microbes) and their environment.

Earth’s ecosystems can be divided into two main types: terrestrial and aquatic.

How Big are Ecosystems?

Ecosystems vary considerably in size, and they can also overlap with other ecosystems.

A forest is an ecosystem, and a pond in that forest is also a separate, smaller ecosystem. Similarly, a rocky shore and a single tidal pool on the shore are both considered ecosystems.

How Complex are Ecosystems?

Coral reefs and rainforests are the world’s most biodiverse ecosystems.

Ecosystem Roles and the Flow of Energy

A producer in an ecosystem is any organism that generates biomass.

Primary producers are autotrophs: organisms that are capable of producing their own food.

Primary producers produce the energy-containing biomass that supports the other organisms in the ecosystem.

Plants are the primary producers in the majority of ecosystems.

Plants capture energy from sunlight and use it to turn water and carbon dioxide into carbohydrates via a process known as photosynthesis.

Oxygen is also produced as a by-product of photosynthesis.

Some ecosystems, such as deep sea hydrothermal vents and the isolated Movile Cave in Romania, do not have access to sunlight. In these systems it is bacteria, rather than plants, that are the primary producers.

Instead of using sunlight, bacteria use chemicals as a source of energy. This is known as chemosynthesis. Sulphur and sulphur compounds are by-products of chemosynthesis.

A heterotroph is an organism, such as an animal, that is unable to produce its own food.

The consumers in an ecosystem are heterotrophs. Because they are unable to produce their own food, consumers need to consume other organisms within the ecosystem in order to acquire the nutrients that they need to live and grow (i.e. increase their biomass).

A primary consumer is an organism that consumes primary producers. In land ecosystems they are herbivores that eat plants.

Decomposers are the organisms within an ecosystem that break down dead organic matter, and in doing so create nutrients which can once again be used by the primary producers.

Detritivores (invertebrates such as earth worms, woodlice, and millipedes) feed on larger particles of dead matter and begin the process of decomposition.

Soil bacteria and fungi use enzymes to break down dead matter into simple substances.

Natural processes in an ecosystem can also speed up decomposition. The water-soluble components may be dissolved and carried away by water (a process known as leaching), and cycles of freezing and thawing can also break down matter into smaller particles.

Organisms are said to occupy a specific trophic level in an ecosystem depending on the role they play, starting with primary producers at level 1.

Some organisms can be found on multiple trophic levels – for example, an omnivore may consume both plants and herbivores, and thus occupy trophic levels 2 and 3.

Apex predators occupy the highest trophic level in an ecosystem.

Flow of Energy and Matter

Energy and matter in an ecosystem flow through the various trophic levels, starting from the primary producers. The output of the producers is determined by factors such as rainfall, temperature, and the range of minerals available in the soil.

At each level some energy is used up, and only a small fraction of the energy output at the bottom level moves to the apex predators at the highest level.

A food chain is a linear sequence of energy and matter flowing from a producer to the various levels of consumer. Energy typically flows through an ecosystem via extensive food webs that link many different food chains in complex ways.

Healthy ecosystems tend to be relatively stable – that is, the structure (or the basic biotic and abiotic components) of the ecosystem remain in equilibrium (mostly unaltered) for long periods of time.

Stable ecosystems tend to be highly resistant (relatively unaffected by disturbances) and resilient (able to recover quickly after disturbances).

Disturbances are events that affect ecosystems by changing the environment or the availability of resources in some way. Disturbances can be major or minor.

Major disturbances include events such as volcanic eruptions, floods and wildfires, while minor disturbances range from unusually cold winters to pest outbreaks.

Biomes are large physical areas characterized by their climate and terrain. They are useful for categorizing different parts of the world according to their shared characteristics.

The same biome can be found in different parts of the world. For example, the tropical forest biome exists both in Africa and in South America (and elsewhere).

Biomes represent ecosystems in their very broadest sense. They give us a wide-scale, overall view of physical areas and the types of smaller ecosystems that might exist within them.

A key aspect of an ecosystem is that its various components are highly interconnected and interdependent. In contrast, the various species found in a specific biome aren’t necessarily linked to each other in a significant way.

Discover some of the most biodiverse ecosystems on Earth: