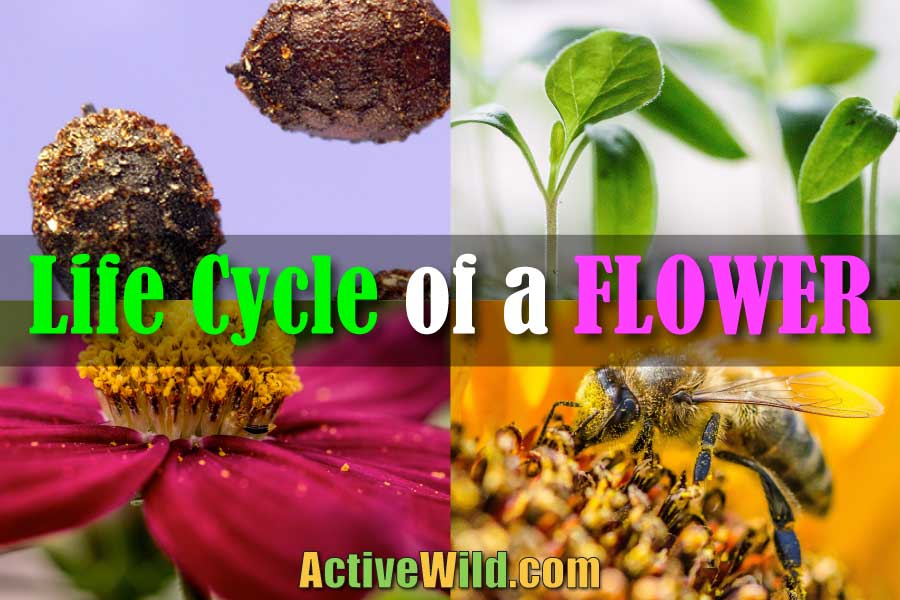 Life Cycle Of A Flower: Discover How Flowers Reproduce

An in-depth look at the life cycle of a flower, with diagrams and photos.

Discover more about the plant kingdom with Active Wild…

Flowering plants are also known as angiosperms. There are over 300,000 known species of flowering plants; the group makes up between 85 and 90% of all plants.

Not all flowering plants are typical ‘flowers’ such as lilies, daffodils, roses, fuchsias and daisies; the group also contains all grasses, and most well-known trees (apart from those that produce cones). Birch, beech, ash and willow trees, for example, are all flowering plants, as is the Johnson grass in the photo below.

The flower is the reproductive organ of a flowering plant. It is where a plant’s reproductive cells are produced, dispersed, and fertilized. No other types of plant produce flowers.

Below is a diagram of the parts of a typical flower. 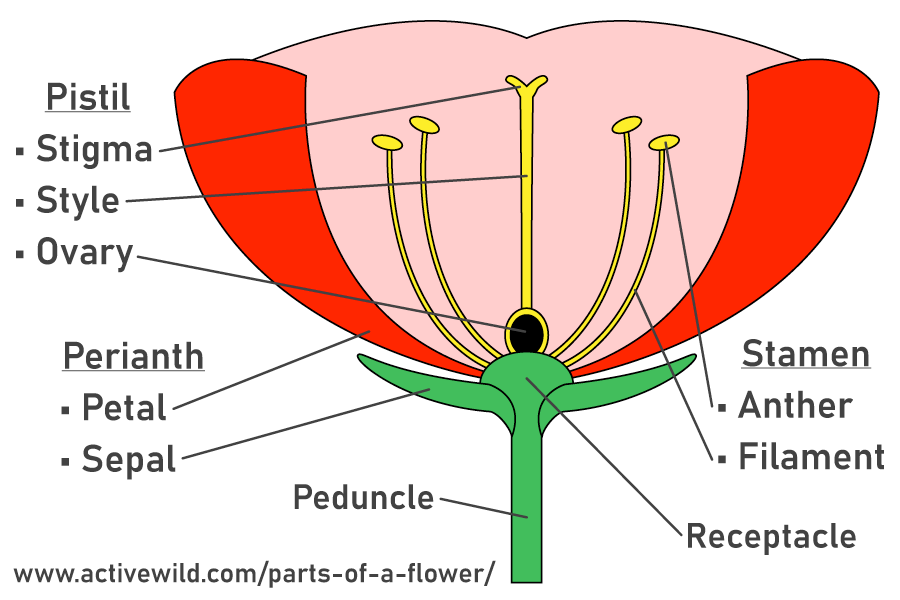 The Life Cycle Of A Flower: Quick Version

Below is a TLDR / condensed version of the life cycle of a flower. You’ll find the whole process described in greater detail further down the page.

The Life Cycle Of A Flower

Another big difference between the life cycle of a plant and that of an animal is that a plant’s life cycle involves an alternation of generations.

This is quite a complex subject, and one which we’ll cover in greater depth in a future article.

In order for two plants to create a new plant, a reproductive cell from one plant has to join with that of another.

Can you see a problem here?

How does a plant, which is (literally) rooted to the ground, transport its reproductive cells to another plant?

Every year in the spring and early summer, the air becomes full of microscopic, dust-like granules called pollen.

This powdery substance is produced not just by flowering plants, but also by plants with cones (gymnosperms).

Although difficult to see while airborne, pollen fills the air in vast quantities. A single birch catkin can produce five and a half million pollen grains, and a single birch tree may produce several thousand catkins.

That all adds up to a lot of pollen floating around!

If you live near a lot of trees you may even notice cars in your neighborhood becoming covered with a layer of pollen.

Some people suffer from hay-fever, an allergic reaction triggered by pollen that causes sneezing, irritated eyes, and other cold-like symptoms.

Plants don’t produce pollen in vast quantities just to annoy people with hay-fever; pollen production is an important stage in the life cycle of a plant.

Are Flowers Male Or Female?

A mammal such as a cat, dog or human is either male or female (outside of extremely rare cases).

In plants, the difference isn’t so clear-cut.

In fact, many flowers have both male and female parts.

That’s right; a single flower can be both ‘male’ and ‘female’ at the same time!

The male parts of a flower are called stamens; the female parts carpels. In many flowers, the carpels are joined together, in which case the single structure is known as a pistil.

Flowers with both stamens and carpels (i.e. plants that have both male and female parts) are said to be perfect. (Other terms used to describe such plants are hermaphroditic or bisexual.)

Around 80% of all flowering plant species produce flowers that are perfect.

In some of these species, male and female flowers are found on the same plant (monoecious plants); in others, individual plants have either all-male, or all-female, flowers (dioecious plants).

The Male Parts Of A Flower

(Or refer back to the diagram above)

As we’ve found, the male parts of a flower are called stamens. The stamens of most flowers are arranged in a ring around the female parts, which are found at the center of the flower (if the flower is perfect).

At the tip of each stamen is a structure known as an anther. It is within the anther that pollen is produced.

The Female Parts Of A Flower

The female parts of the flower are called carpels. In many flowers the carpels are joined together, forming a pistil.

The carpels or pistil are located in the center of a flower, where they are surrounded by stamens (if the flower is perfect).

At the base of a carpel is a chamber called an ovary. It is here that the egg-producing structures known as ovules are found. The ovules produce the embryo sac, which contains an egg.

Sexual reproduction in flowers begins with pollination. This happens when a grain of pollen lands on the stigma of a flower. But how does it get there?

Plants can move, to a certain extent – for example, some plants position their flowers and / or leaves towards the sun, while others close their petals at night.

However, plant movement is limited to one fixed spot – plants can’t lift up their roots and walk to another place.

This makes getting pollen to another flower difficult!

Plants have solved this problem in a number of different ways, the two most common being: animal pollination; and wind pollination, both of which we’ll cover in more detail below.

Many flowers can actually pollinate themselves! Self-pollination occurs when a flower’s own pollen lands on its stigma.

Cross-pollination is when a flower is pollinated by pollen from another plant. It is usually desirable because it produces offspring that are genetically unique.

Because self-pollination isn’t always beneficial to a species, many plants have adaptions to prevent it from happening.

For example, many species produce flowers whose anthers and stigmas mature at different times. Having separate male and female flowers is another measure to prevent self-pollination.

Some species use self-pollination as a ‘last resort’ if they haven’t been pollinated by pollen from another plant.

Around 87% of all flower species rely on animals to distribute their pollen. Animals that perform this task are known as pollinators.

You’ve almost certainly seen honey bees, bumblebees, butterflies and many other types of insect flying from flower to flower. In fact, around 90% of all flowering plants are pollinated by insects.

Although they don’t realize it, those insects are a vital part of the plant life cycle. As they move from flower to flower drinking nectar (see below), they’re also spreading pollen.

Pollinators are performing an important service, and for that the flower makes sure they are rewarded…

Nectar is a sugary liquid produced by flowers for the purpose of attracting pollinators. This energy-rich substance is the animal’s ‘reward’ for pollinating the flower.

Pollinators such as honey bees also collect excess pollen from the flower. (Many species of bee have special pouches in their hind legs known as pollen baskets for transporting pollen back to the hive.)

It’s not just insects that act as pollinators; birds such as hummingbirds, mammals such as bats, and even reptiles such as lizards also pollinate flowers in some ecosystems.

A flower’s bright colors and distinctive scents are adaptations for attracting pollinating animals.

Animals that won’t do such a good job in distributing the plant’s pollen are prevented from entering the flower.

The petals of some flowers even have patterns known as nectar guides. These direct the visiting insect to the flower’s nectar.

While the insect is in the flower, it brushes against the flower’s anthers, causing pollen to fall onto its body.

Pollen grains may be sticky or barbed to increase the likelihood of their becoming attached to an animal’s body.

Pollination occurs when the pollen an insect is carrying brushes off onto the stigma of another flower. The stigma is often sticky to increase the likelihood of pollen becoming attached.

Not all flowering plants are pollinated by animals.

Wind-pollinated plants, as the name suggests, simply let the wind carry their pollen away – hopefully towards another plant of the same species.

Wind pollination is more ‘hit and miss’ than animal pollination. For this reason, wind-pollinated plants tend to produce much larger amounts of pollen than those that are pollinated by animals. Their grains are smooth and light to aid wind dispersal.

Because wind pollinated plants don’t have to attract animals, their flowers are typically less colorful, produce less nectar, and are unscented. Their stigmas are often large and feathery to catch the pollen as it drifts past.

The pollen tube extends down through the style (the stalk of the carpel) and into the ovary. It enters an ovule via a small opening in the ovule called a micropyle.

Two reproductive cells from the pollen travel down the tube and into the ovule. One of these joins with, or fertilizes, the egg.

The fertilized egg, or zygote, is the very first stage in the life of a new plant!

The other cell combines with two other nuclei present in the embryo sac. This forms what will become the endosperm – a tissue present in the seed that will provide nourishment for the developing plant embryo.

After pollination, the rest of the flower usually wilts as there is no longer any need for it to attract pollinators.

This type of cell division is called mitosis.

The tiny plant embryo wouldn’t survive long on its own, and is therefore encased within a seed.

Seeds have three parts: the plant embryo itself; the endosperm; and a protective seed coat.

The seed coat is formed from the integument (a protective layer of cells) of the ovule in which the egg formed.

The plant life cycle doesn’t end with the production of a seed; somehow that seed has to leave the parent plant and find itself somewhere suitable to grow…

Flowering plants surround their seeds with a fruit. The main purpose of a fruit is to transport seeds away from the parent plant.

Fruits develop from the ovaries of the parent plant. Depending on species, a fruit may contain a single seed or multiple seeds.

There are many different types of fruit. Some, such as berries (e.g. tomatoes, grapes) or drupes (e.g. cherries, peaches) are fleshy.

Others, such as nuts, or sunflower seeds* are dry.

*What is commonly thought of as a sunflower ‘seed’ is actually the plant’s fruit.

Some fruit float, some are carried by the wind, some stick onto the fur of animals and others taste good, which means that animals eat them, carry the seeds around in their stomachs, and poop them out away from the parent plant (it may be gross, but it’s effective).

With luck, the seed will find itself away from the parent plant and in a suitable growing environment.

When conditions are right the seed will germinate (start growing). Until then, the seed is said to be dormant.

A germinating plant embryo is fueled by the endosperm contained within its seed. As soon as its first leaves appear, it will begin to photosynthesize.

Adulthood And The Completion Of The Plant Life Cycle

If the plant receives the correct amounts of sunlight, nutrients and water, and provided it manages to avoid being eaten, becoming host to a parasite, or suffering damage from flooding, fire, or other environmental causes, it will eventually reach adulthood.

The plant will then begin to produce pollen and ovules of its own, giving rise to the next generation, and thereby completing its life cycle.

Find out more about the wonderful world of plants with Active Wild: