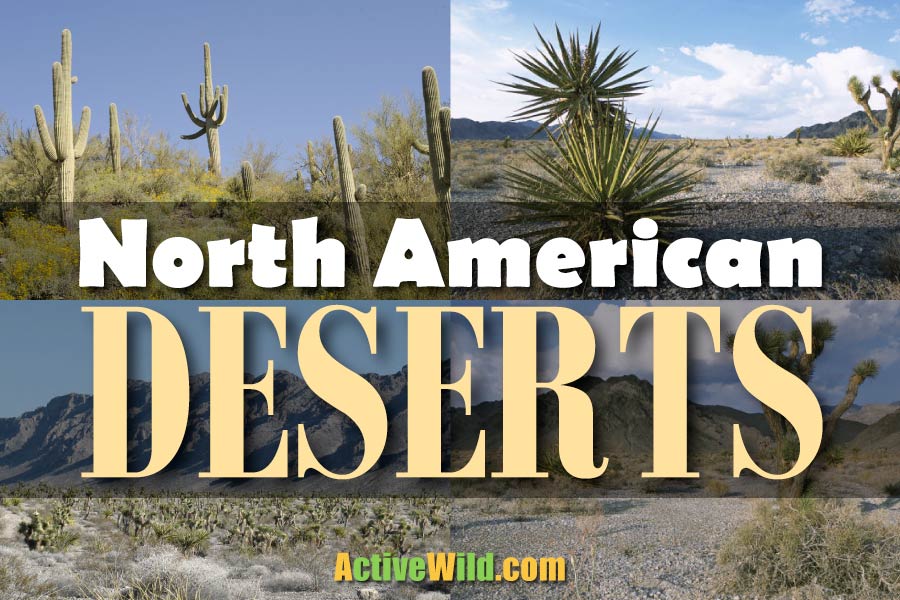 Facts on North American deserts, and the animals and plants that call the deserts of North America their home.

Other desert pages on Active Wild…

There are four major North American deserts: the Great Basin Desert, Mojave Desert, Sonoran Desert and Chihuahuan Desert. All are located in the southwest of North America and correspond, roughly, with the geological region known as the Basin and Range Province.

The Basin and Range Province is a vast area that consists of approximately 100 parallel mountain ranges, orientated north to south, and the flat, desert areas (basins) in between them. The mountains were formed about 30 million years ago, when the earth’s crust was gradually heated and stretched, cracking along hundreds of fault lines.

Over time, land on one side of each fault line has risen to form mountains, while land on the other side has sunk and formed basins.

These mountain ranges, along with the Rocky Mountains to the east, form a rain shadow over the basins of the Basin and Range Province; as moisture-bearing clouds pass over the mountains they drop their water on the higher ground, leaving the land in-between with very little precipitation.

This is the backdrop against which life exists in these unique deserts of North America. 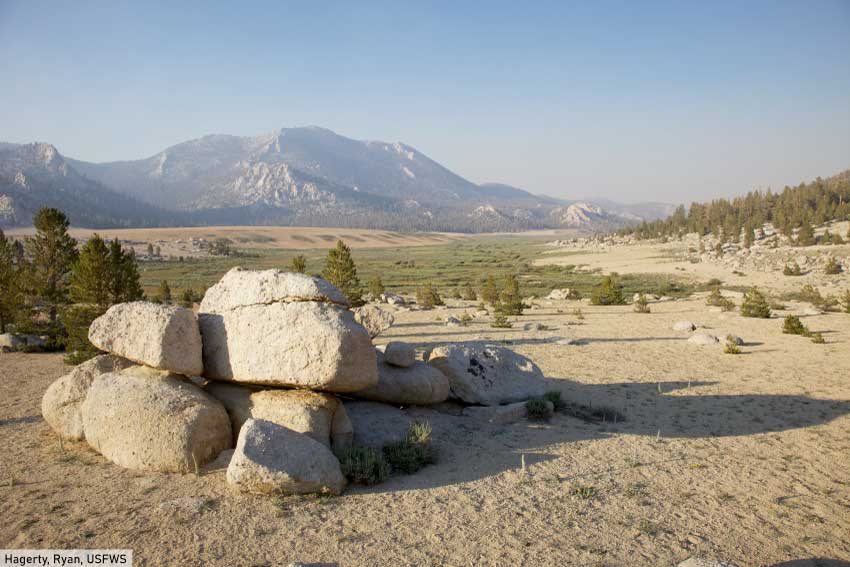 The desert encompasses most of the state of Nevada and also covers parts of Utah, California, and Idaho. It is bordered in the south by the Mojave Desert.

The Great Basin Desert is North America’s northernmost desert, and the one with the highest elevation. It contains numerous mountain peaks that are higher than 9,800 feet (3,000 m), and even the valleys between ranges, known as basins, are mostly above 3,900 ft (1,200 m).

The desert’s height above sea level and northerly location make it the coldest of the four main North American deserts; of the three deserts, it is the only one to be defined as a cold desert, rather than a hot desert.

The Mojave Desert is North America’s driest and smallest desert. It covers an area of approximately 48,000 square miles (124,000 km2). It is located mostly within southern Nevada and south-eastern California. To its north lies the Great Basin Desert, and to the south lies the Sonoran Desert.

The Mojave shows the typical geological arrangement of parallel mountain ranges and valleys, and is mostly higher than 2,000 feet (610 m) above sea level.

Interestingly, one of the valleys found in the Mojave, Death Valley, is the lowest place in North America, being 280 ft (85 m) below sea level. Death Valley is one of the hottest places on earth.

South of the Mojave Desert, and hugging the shores of the Gulf of California, lies the Sonoran Desert. This desert stretches eastwards across California into southern Arizona and southwards into Mexico. It covers about 100,000 square mi (260,000 km2) and lies mostly below 2,000 ft (610 m) in altitude.

Like the Mojave Desert, the Sonoran Desert is a product of the range and basin disturbance that affected the south-western regions of North America some 30 million years ago. It is home to the Salton Sea, a large, saline lake that lies in one such desert basin.

The Sonoran Desert is also home to the only active dune field, or erg, in North America. Here, one can find rolling dunes of sand that are reminiscent of Africa’s Sahara Desert.

Lying to the east of the Sonoran Desert, the Chihuahuan Desert is almost the size of the Great Basin Desert, and is the most easterly and southerly of the North American deserts. It covers parts of New Mexico, Arizona, and Texas in the United States, and extends southwards into Mexico.

All the North American deserts experience extreme variations in temperature, which is a typical feature of deserts worldwide. A desert’s dry air and cloudless skies allow intense warming during the daytime, then allow the same heat to escape during the night.

Going from north to south, the four North American deserts show a trend of increasing average annual temperature. The Great Basin Desert is a cold desert; it is furthest from the equator and has the highest average altitude. Its winters are characterised by snow and ice, and its summers are very short. Its annual average temperature is 49 °F (9 °C).

Moving southwards, the deserts get closer to the equator and have lower average altitudes. They are classified as hot deserts, with the average annual temperature in the Chihuahuan Desert being 24 °C (75 °F).

In all four North American deserts, there is a large difference between winter and summer temperatures. Winters bring snow to the high peaks, whereas summers are scorching hot.

In addition, on any one day, there is a large variation in temperature between the cold mountain peaks and the warm valleys. The extreme temperature gradients give rise to strong winds, which make these deserts even more inhospitable.

Deserts by definition receive very little precipitation. In the case of the North American deserts this is due to the mountain ranges that prevent moist air from rolling in.

In the Great Basin Desert, most of the precipitation occurs as snowfall, and the tops of the mountains may actually be quite moist at times.

Melt water draining from the mountains collects in the basins, forming shallow, temporary lakes. With nowhere to drain into, the water in these lakes eventually evaporates, leaving saline (salty) soil behind.

Salt lakes are typical in the basins of all four major North American deserts, the most famous being the Great Salt Lake in the state of Utah.

It is not only the quantity of rain that is important in a desert, but also its timing. In the Great Basin and Mojave Deserts, rain falls mostly in the winter months, and the plants have their growing season in spring.

The Chihuahuan Desert is in a summer rainfall area, and the Sonoran Desert has the benefit of rain in winter and in summer. This bimodal pattern of rainfall allows the plants to grow in both spring and summer.

Vegetation in the North American deserts is typically very sparse. The plants have to survive extreme temperatures, as well as aridity, and they are not able to grow fast. In addition, the desert soils are often salty, low in nutrients and almost completely lacking in humus (organic matter).

Despite these harsh conditions, the deserts support an array of fascinating plant species, many of which have remarkable adaptations for growing in desert regions.

Many desert plants, including most cacti, are succulent, storing water in their leaves or stems. Some desert plants have shallow roots designed to collect every drop of surface moisture, while others have deep roots that tap in to underground water sources.

Annual plants spend most of their lives as seeds in the soil, only bursting into life after rain has fallen. It is these plants that coat the desert with spectacular flowers at certain times of the year.

The range and basin topography provides many different habitats and, as a consequence, there is a relatively high species diversity in all these deserts.

Interestingly, each of the four deserts has unique plant species, that are characteristic and, in some cases, found nowhere else on earth.

Of the four deserts, the Great Basin has the lowest diversity of plant species. It is characterised by shrubby sagebrush and saltbushes, as well as grasses, in the valleys; these are salt tolerant species that can survive the saline soil conditions.

In fact, parts of this desert are sometimes described as ‘sagebrush seas’ because of the dominance of this blue-grey plant. These tough plants produce seeds that are eaten by rodents and insects, and form the basis of many food chains.

Conditions in the Mojave Desert are hotter, and plants are adapted to this. Cactus plants are common, with their stems modified to store water and do the work of leaves (photosynthesise), while their leaves are modified into nasty spikes to keep herbivores at bay. In addition, the creosote bush and Joshua tree are characteristic; Joshua trees occur nowhere else on earth. Annuals are also present and can provide colourful displays of flowers after the rains.

Plant biodiversity is highest in the Sonoran Desert, associated with the occurrence of two rainy seasons. Low trees and bushes, such as creosote bushes and mesquite, are common, along with the amazing ocotillo, which only produces leaves once rain has fallen. But it is in the cactus department that the Sonoran plants excel. The giant saguaro cactus can stand 40 ft (12 m) tall and live for 150 years. It occurs nowhere else in the world.

The Chihuahuan Desert is also home to many fascinating cactus species, including some that are found nowhere else. In addition, creosote bush, ocotillo, yukkas and agaves characterise this desert.

Many hundreds of different animal species make their homes in the North American deserts. Because of the aridity, all the animal inhabitants have to get their water from their food; what water there is, is often salty and unsuitable for drinking.

The stems and leaves of succulent plants provide water and food for many insects and these, in turn, support insectivorous birds, bats and lizards, such as chuckwallas.

Small rodents, for example kangaroo rats and ground squirrels, are able to make water from the seeds they eat, and excrete very little water in their waste.

Desert birds must also get moisture from the spiders, insects, fruits and seeds that they eat, although they can fly to water sources if necessary.

For most of the animals though, avoiding the extreme temperatures is a more serious problem.

Rodents, foxes and skunks all forage at night and spend the day asleep underground.

Most desert reptiles, for example the Gila monster, and all the amphibians, are also nocturnal in order to avoid the heat. In addition, they hibernate in underground burrows during the seasons when temperatures are too extreme.

Jackrabbits have enormous ears that contain many blood vessels – heat lost through the ears helps to cool the rabbit. A similar adaptation is seen in the kit fox.

The smaller mammals are preyed upon by coyotes, bobcats, snakes and owls, most of which also have to be active at night in order to catch their prey.

There are a few large mammal species, that also live in these deserts: bighorn sheep inhabit the rocky mountain sides in the Mojave and Sonoran Deserts, while pronghorn antelope follow migration paths that take them into the deserts after rains have brought about the growth of annual plants.

Even mountain lions make their homes in the harsh mountain ranges of the North American deserts.

Scientists working in the Sonoran Desert have recorded 350 species of birds, 20 species of amphibians, over 100 reptile species, and 30 different types of fish.

This is an amazing array of biodiversity considering the inhospitable conditions in the desert. It is clear that the North American deserts offer suitable ecological niches to a large variety of living creatures, just as long as they are adapted to deal with the conditions of extreme heat, cold and aridity.

Find out more about deserts and desert wildlife on Active Wild…