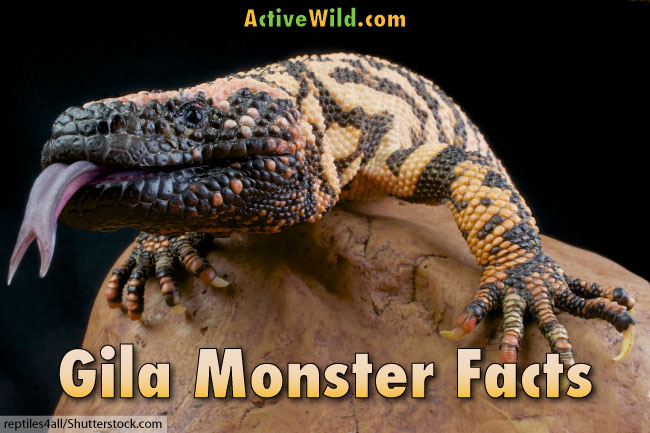 Gila Monster Facts At A Glance

The Gila monster is a heavily-built lizard with a broad head, short legs and a fat tail. Its feet are wide and have long, sharp claws. The Gila monster’s colored patches vary in color from individual to individual, and can be bright yellow, orange or pink.

The bead-like scales of the Gila monster and the four other species in the genus Heloderma give the genus its name, which means ‘studded skin’. Members of the genus are often referred to as ‘beaded lizards’.

Watch Coyote Peterson come face to face with a Gila monster in the video below:

What’s In A Name?

Where Is The Gila Monster Found?

The Gila monster is native to northwestern Mexico and southwestern United States. The Mexican state of Sonora and Arizona in the United States (including the Mojave, Sonoran and Chihuahuan deserts) make up a large part of its range.

The species can also be found in parts of New Mexico, Utah, Nevada and California.

Try to find these areas on the interactive map below:

The species is rarely found in farmland and other open areas with little vegetation.

The Gila monster spends over 90% of its time under cover, only emerging to feed or to bask in the sun. The refuges used by Gila monsters include burrows, dense shrub, thickets and rock piles.

Although the Gila monster is mainly solitary, it is occasionally known to share a shelter with other individuals.

The Gila monster adjusts its activity pattern to keep its surface body temperature at around 30°C (86°F).

During the dry months of spring and early summer, the Gila monster is active in the morning. During the summer, when daytime temperatures can be extremely hot, it will adjust its behavior and become more active at night.

The Gila monster has a slow metabolism, and as a result has one of the slowest sprinting speeds of any lizard. However, thanks to its ability to use oxygen efficiently, it is able to sustain intense physical activity, such as combat, for relatively long periods of time.

Before the mating season in May and June, male Gila monsters engage in wrestling matches that involve twisting and pushing until one of the animals gains the dominant position on top of his opponent. Males that are successful in combat are more likely to mate successfully with females.

In July or August, the female Gila monster will lay a clutch of 2 to 12 large, oval-shaped eggs, which she buries about 13cm (5in) deep in the sand. The hatchlings emerge after 9 to 12 months. 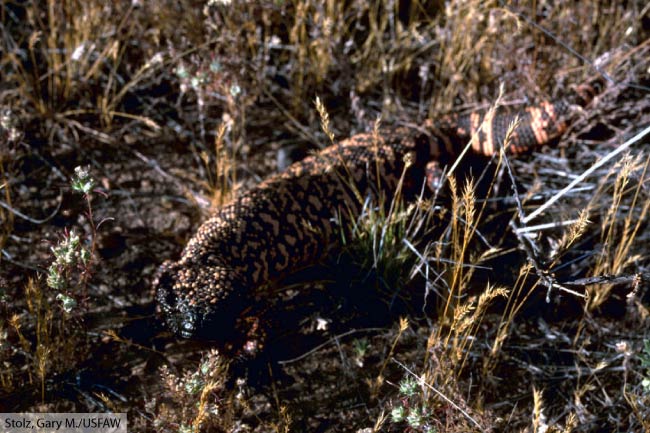 What Do Gila Monsters Eat?

Due to its slow speed and poor eyesight, the Gila monster prefers to hunt for bird and reptile eggs rather than live prey. It can detect eggs buried 15 cm (6 in.) in the ground using its acute sense of smell. The Gila monster will also climb trees and cacti in search of bird nests.

Although the Gila monster eats infrequently, its meals are large. It will take in up to a third of its body mass when it feeds.

The Gila monster can survive months without food by relying on the fat stored in its tail. The size of its tail fluctuates depending on how recently the animal has eaten.

There is no anti-venom to Gila monster venom. However, the venom is produced in relatively small quantities and is unlikely to be fatal to a healthy human.

The Gila monster’s bite, on the other hand, is said to be extremely painful. The lizard has a tendency to hold on tight, and is difficult to pry off. Potential symptoms of a Gila monster bite include nausea, swelling and fever.

Both the Gila monster’s bright coloration, and its venomous saliva, are believed to be defensive adaptations against predators. Predators of the Gila monster include coyotes and birds of prey.

Is The Gila Monster Endangered?

The Gila monster is rated ‘Near Threatened‘ by the IUCN.

The total population size is unknown, but it’s thought that the species is in significant decline. In 1952, the Gila monster became the first venomous animal in Northern America to be given legal protection.

The main threats to the Gila monster include: