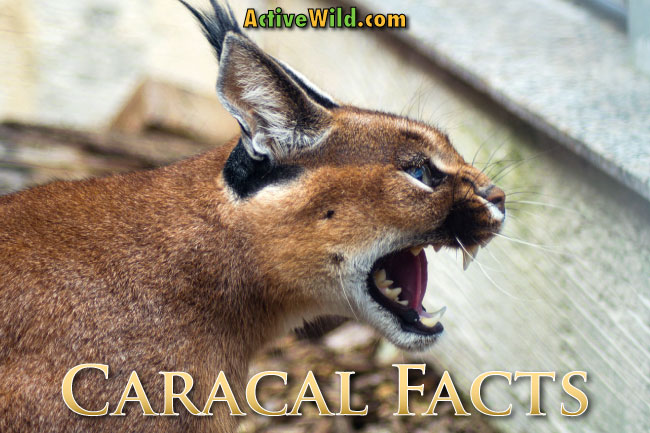 Caracal facts, pictures, video and information. The caracal is a mid-sized wild cat found in Africa and parts of Asia. It has pale golden-brown fur and distinctive tufted ears. Read on to find out more about this awesome predator …

Caracal Facts At A Glance

The caracal is medium-sized wild cat that is found in Africa and Asia. Its closest relatives are the African golden cat (Caracal aurata) and the serval (Leptailurus serval). Eight subspecies of caracal are recognized today.

The name caracal is derived from the Turkish word ‘karakal’ which translates as ‘black-eared’. The species can be tamed, and was once trained to hunt birds and other small game in places such as Iran and India.

The caracal is known for its incredible jumping ability. Watch the video below to see just how high this cat can leap!

The caracal’s fur is short and dense, and typically reddish-brown in color. Black individuals have also been reported in Africa, though they are extremely rare. The belly and insides of the legs are white, sometimes with small pale red spots.

The face of the caracal has distinct black and white markings, including two black stripes running down from the forehead to the nose. The eyes vary in color from green and gray to copper, and have round pupils.

The caracal’s most distinctive feature is its pointed ears, which have prominent black tufts at their tips. The caracal’s tufted ears resemble those of a lynx, which has led to the species sometimes being called the ‘Persian lynx’ or ‘desert lynx’.

Despite these similarities the caracal and the lynx are not in the same genus. The caracal lacks the spots and stripes characteristic of the true lynx and also has a longer tail.

The caracal is a similar size to the bobcat, but on average weighs more.

*** Want to know more about words like ‘genus’ and how different animals are related to each other? Check out our Animal Classification page! ***

Distribution: Where Do Caracals Live?

The caracal is found throughout Africa but not in the continent’s driest and wettest parts: the species is absent from central Sahara and the rainforests of equatorial Africa.

The range of the caracal also extends into the Arabian Peninsula (except for the desert areas) as well as southwestern and central Asia as far as central India. 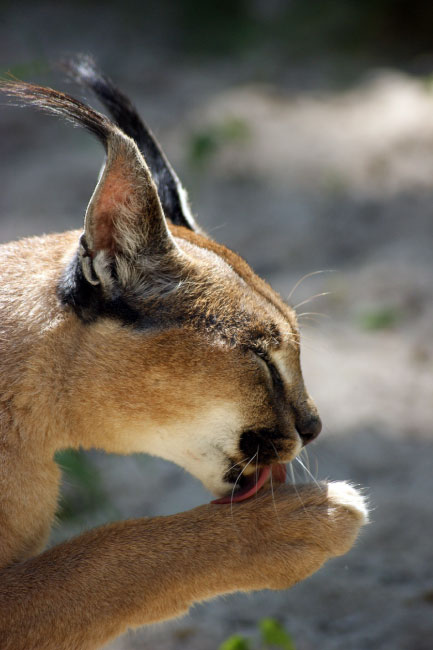 The caracal can be found in a wide range of habitats, including semi-desert, scrubland, savanna, montane forest, marshy lowland and moist woodland. The species favors habitats that offer some form of cover, either from vegetation or rocks. Although the species prefers dry areas, it avoids true desert. It is also absent from Africa’s tropical rainforests.

The caracal is at home in mountainous habitats and is frequently found in elevations up to 2,500m (8,200ft). In the Ethiopian Highlands, the species has been reported at over 3,000m (9,800ft) above sea level.

The caracal is a solitary and reclusive species. It’s typically (though not exclusively) nocturnal (active at night).

The caracal maintains a territory that it marks with scratching, urine and dung. The size of caracal territories varies hugely, ranging from 5km2 to over 1,000km2. Males have territories up to four times as large as females, and the largest territories are found in the arid regions of the Middle East.

The caracal communicates in several different ways. Like other cat species, the caracal can produce a number of different vocalizations (vocal sounds), which include meows, purrs, growls, hisses and snarls. The caracal will also communicate by leaving scent marks produced by the glands on its face and between its toes. It also uses its facial markings and ear tufts for visual communication.

The caracal has no mating season: the female can go into estrus (become fertile) multiple times throughout the year, attracting males with the chemical signals in its urine. The female almost always mates with several males, preferring older and larger individuals.

After a gestation period of 68 to 81 days, the female gives birth in an abandoned burrow or dense vegetation to a litter of 1 to 6 young. Caracal kittens are born with their eyes closed, ears drooping, and claws which they are unable to retract into their paws.

By 2 months of age, the kittens begin to move around, play, learn hunting skills from their mother and eat solid food. Around the age of 3 months, they have learned to catch their own prey and are weaned (they stop drinking their mother’s milk).

By the time they’re 10 months old, the young are fully independent and ready to establish their own territories.

What Do Caracals Eat?

The caracal is a carnivore and a superb hunter. It mainly eats small mammals, including rodents and hare, though it’s also able capture prey up to 3 times its size, such as small antelopes. It hunts by sneaking within 5m (16ft) of its prey before launching into a sudden sprint.

The caracal can also catch birds, and is able to leap higher than 3m (9.8ft) into the air in order to do so. Reptiles (such as snakes and lizards), insects, fish, carrion and a small amount of plant matter also feature in the caracal’s diet. Occasionally, the caracal will prey on livestock, including sheep, goats and poultry.

The caracal usually eats its food immediately, although occasionally it has been observed to drag larger prey under cover to feed on later. The caracal needs to drink very little, since it gets much of the water it requires from the food it eats.

Is The Caracal Endangered?

The caracal is rated ‘Least Concern’ by the IUCN.

The species is very common in central and southern Africa, and no significant species-wide decline has been observed. However, although the global population is stable, there have been local declines in places like Jordan, Pakistan and parts of North Africa.

Where local populations are threatened, it’s usually because of the following two reasons: