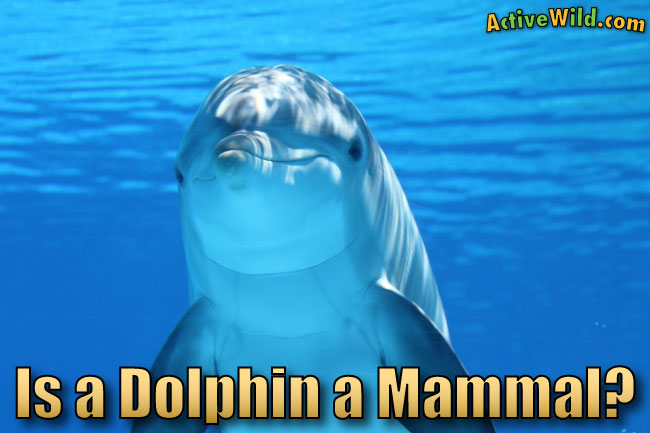 Is a dolphin a mammal? On this page you’ll find out the answer to this often-asked question! You’ll also learn an interesting fact about dolphins and hippos …

The answer is YES, a dolphin IS a mammal. Let’s find out why …

Although a dolphin looks more like a fish than a ‘typical’ mammal such as a dog or a cat, it has all the characteristics of a mammal. These include: having lungs for breathing air, having a backbone, and the female of the species giving birth to live young and feeding their young with milk.

People get confused about dolphins because dolphins resemble large fish such as sharks. Instead of having arms and legs like land mammals, dolphins have fins. They live in the sea and in some rivers – environments that seem very unlike typical mammal habitats.

What is a dolphin?

Dolphins, along with whales and porpoises, are members of a group of mammals called Cetacea.

Members of this group are known as Cetaceans. They are mammals that have adapted to an aquatic lifestyle. Cetaceans are found throughout the world’s oceans (and in some freshwater river systems too). Although todays cetaceans are well adapted for living in the water, their ancestors lived on land.

The dolphin’s ancestors were hooved animals. All of the cetaceans are in the order (a group of related animals) Artiodactyla, or ‘even-toed ungulates’.

Other even-toed ungulates include cattle, giraffes, pigs, deer and … hippopotamuses.

In fact, the closest living relative of the cetaceans (including the dolphin) is the hippopotamus!

Around 50 million years ago in the Indian subcontinent, even-toed ungulates began to adapt to an aquatic lifestyle. Over time they gradually evolved to become totally dependent on water, becoming the whales, dolphins and porpoises of today.

Why Are Dolphins Mammals?

A mammal is a member of the class Mammalia. You can tell that a dolphin is a mammal because it has a number of characteristics that are only found in mammals rather than in fish, or any other kind of animal.

You can find out more about mammal characteristics here: What Is A Mammal?

When people think of a ‘mammal’ they tend to think of a hairy animal. In fact, having hair – or at least, hair follicles – is one of the defining characteristics of a mammal. No other type of animal has hair.

(Hair follicles are the organs within a mammal’s skin that produce hair.)

Do Dolphins Have Hair?

Most dolphins don’t have hair. However, they do have hair follicles. Some scientists think that these act as sensory organs.

Some river dolphins do have small hairs on their snouts. Again, it is thought that these may provide sensory information to make up for the animals’ poor eyesight.

Is a Dolphin a Mammal: Conclusion

On this page you’ve discovered that dolphins ARE mammals. This is because dolphins have mammalian characteristics such as being warm blooded, and producing milk to feed their young.

You’ve also found out that dolphins are members of a group of animals called Cetacea, and that all Cetaceans are related to hooved animals.

Don’t forget that the closest living relative of the Cetaceans is the hippo!

If you liked this page, be sure to share it on social media by using the share buttons provided!

2 thoughts on “Is a Dolphin a Mammal?”