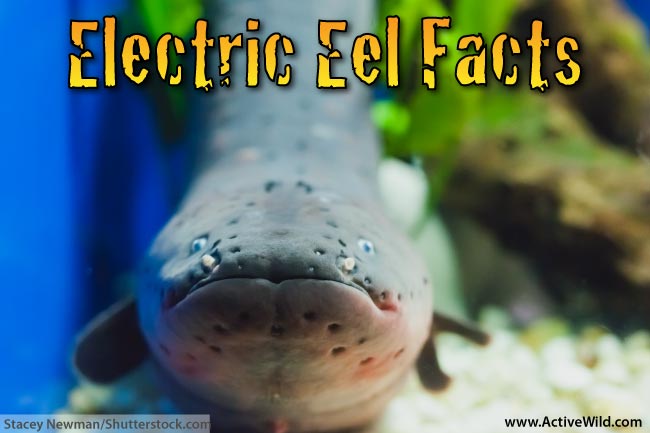 This page contains Electric Eel facts for kids (and adults). This animal is part of the Active Wild Online Zoo: information, pictures and videos of amazing animals from all around the world!

Electric Eel Facts At A Glance

Watch the video below to see Electric Eels in the wild:

(Warning: The video shows images of an electric eel preying on a fish.)

At first glance you might not think that there was anything unusual about the electric eel. However, this long-bodied, mud-colored fish has an extraordinary superpower: the ability to generate potentially dangerous amounts of electricity. The electric eel uses electricity both to find its way around and to disable its prey.

Not An Eel, But A Knifefish

Despite its name and appearance, the electric eel is not an eel at all, but a knifefish. Knifefish are members of the Gymnotiformes order of bony fish.

(Although ‘real’ eels are also fish, they are members of the order Anguilliformes.)

The electric eel is the only species in the Electrophoridae family.

Only the electric eel can generate enough power to stun and even kill its prey! We’ll find out more about this extraordinary adaptation further down the page.

The electric eel looks more like an eel than a fish, having a long, cylindrical body. Its back is dark brown / black, and its undersides are orange-red.

The electric eel is the largest of the knifefish, weighing up to 20 kg (44lb). It can reach lengths of up to 2.4 m (8 ft.). Female electric eels are larger than males.

Unlike most fish, the electric eel receives most of its oxygen from the air rather than the water. It rises to the surface at intervals of between 2 and 10 minutes to ‘gulp’ air. It doesn’t have lungs; oxygen from the air is absorbed into the bloodstream in the fish’s mouth.

Where Does The Electric Eel Live?

The electric eel lives in the Amazon and Orinoco River basins, in South America. (A ‘basin’ is the area that drains into a river.)

The electric eel lives in freshwater lakes, streams and small rivers. It is often found in muddy, slow-moving water low in oxygen – hence its ability to ‘breathe’ air.

In some flooded forest habitats, electric eels account for a large proportion of the fish biomass. (Biomass is the combined weight, rather than the amount, of species in an area.)

Electric eels mainly eat invertebrates such as crabs and shrimp. Adults also eat fish, amphibians and small mammals. Electric eels have also been known to eat fruit that falls into the water.

The electric eel is famous throughout the world for its ability to generate electricity. It produces two types of electrical discharge: low voltage and high voltage.

The low voltage discharge is used for electrolocation; the electric eel uses the electrical field to ‘see’ its surroundings and to locate prey. This ability, together with the electric eel’s acute sense of smell, allows it to navigate in dark, cloudy water.

The electric eel is even able to detect different colors using electricity, because each color has a slightly different conductivity.

The high voltage discharge is used to immobilize or kill prey and also as a means of defense against potential predators.

The electric eel stuns or kills its prey before eating it using a high voltage discharge.

Most of the electric eel’s body is dedicated to producing electricity: its vital organs are housed in a small region behind the head. The tail, which makes up around 7/8ths of the fish’s body, houses the electricity generating organs.

The electric eel has three electricity generating organs. The main organ and the Hunter’s organ, are found in the top and the bottom of the electric eel’s body respectively.

The Sach’s organ, which is located in the tail, produces the low voltage discharge used for electrolocation.

The electric eel’s body is, in effect, a living battery. It is positive at the head end, and negative at the tail end.

The electric eel has been known to leap up from the water and wrap itself around an animal in order to increase the strength of the electric shock!

The generation of electricity by living organisms is known as bioelectrogenesis.

Is The Electric Eel Deadly?

The electric eel can produce up to 860 volts at 1 amp of current. However, it can only generate this amount of power for 2 milliseconds, which isn’t long enough to electrocute a human.

However, the shock given by the electric eel, while not lethal in itself, is painful. Smaller animals may drown after being stunned by the shock.

Tweets By An Electric Eel!

I bet you didn’t know that electric eels could use Twitter! An electric eel named Miguel Wattson, who lives at the Tennessee Aquarium, sends a tweet every time he emits an electric shock!

You can see his tweets here: https://twitter.com/EelectricMiguel

We hope that you have enjoyed finding out all about the electric eel. You can find out about many other amazing animals at the Active Wild Online Zoo, and on the Rainforest Animals page.