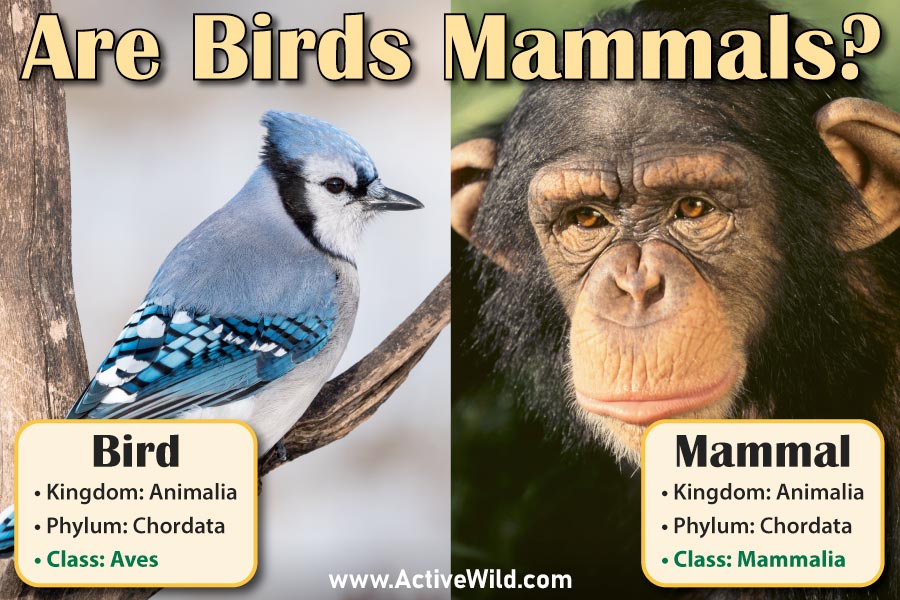 All living birds are directly descended from dinosaurs; a bird is far more closely related to an alligator than it is to a bat or any other mammal!

With such a vast amount of time (and evolution) separating birds and mammals, the answer to the question “Is a bird a mammal?” is definitely “no!”.

To fully understand why a bird is not a mammal, we need to take a closer look at both groups of animals…

Is A Bird A Mammal?

A bird is a member of the class Aves, a group of animals in the animal kingdom.

You can find out more about birds on this page: Birds: The Ultimate Guide

All of the members of Aves (i.e. all birds, both living and extinct) have certain things in common. These shared characteristics are what make birds birds.

If an animal doesn’t have all of these characteristics, then it belongs in a different group.

Likewise, a mammal is a member of a class of animals called Mammalia. To be a member of Mammalia–and therefore to be a mammal–an animal must have mammalian characteristics.

Although there are some similarities between birds and mammals, there are also many differences between the members of each group. Read on to discover what those differences are…

Both Aves and Mammalia are a “class” of animal. A class is one of several groups into which biologists sort animals (and other organisms, including plants and fungi). The process of sorting organisms into groups is known as classification.

Within a class, animals are further sorted into groups of animals that are even more closely related to each other. These groups are known as “orders“.

The biggest order within Aves is Passeriformes. Over half of all living birds belong in this group. Members of the order Passeriformes are known as passerines. Passerines are also known as “perching birds” or “songbirds“.

You may have heard of people talking about an animal “family“. An animal family – such as Canidae, the dog family – is a subgroup of animals within an order.

The largest bird family is Tyrannidae, the tyrant flycatcher family. It contains over 400 bird species.

Biologists classify animals into the above groups by studying the family trees of the animals involved.

It is the presence (or lack of) certain characteristics that allow biologists to determine to which group an animal belongs.

This is because 300 million-odd years of evolution separates birds and mammals; over this time they have become very different animals, and this is why a bird is not a mammal.

Despite birds being different to mammals, there are some similarities between the two groups of animals.

This probably explains why so many people ask “are birds mammals?”.

Similarities Between Birds and Mammals

Although birds and mammals are very different types of animal, they do have certain characteristics in common:

Differences Between Birds and Mammals

Although they share certain characteristics, birds and mammals belong to different orders, and there are many differences between the two groups.

A member of the class Aves (i.e. a bird) has the following basic characteristics that are not shared by mammals:

A member of the class Mammalia (i.e. a mammal) has the following basic characteristics that aren’t shared by birds:

You can find out more about what makes a mammal a mammal here: What is a Mammal?

Being able to fly is not a defining characteristic of birds: bats are mammals, and they can fly, and insects were flying hundreds of millions of years before the first birds even appeared!

(In case you weren’t sure, insects are animals – you can find out why on this page: Are Insects Animals?)

However, all birds – even flightless birds such as penguins and ostriches – are descended from birds that could fly, and their bodies reflect the adaptations required for flight.

The most obvious adaptation for flight is a bird’s wings. They are the bird’s forelimbs. By flapping their wings, most birds can take off, glide, and power themselves through the air.

Most birds have lightweight skeletons with hollow bones to aid flight. Birds have high metabolisms (the amount of energy required to live), and have to eat large amounts of food. This is mainly because flying requires a great deal of energy.

In addition to lungs, birds have a number of air sacs inside their bodies. This helps to move air in and out of a bird faster. This too is a necessity due to the high metabolism of birds.

Is A Bird A Mammal: Conclusion

On this page we’ve answered the question “Are birds mammals?”, finding that birds are not mammals, being of a different class in the animal kingdom, and separated by over 300 years of evolution.

So, the next time that someone asks you ‘Is a bird a mammal?’, you’ll be able to say ‘No, a bird is NOT a mammal!’

If you enjoyed this article, feel free either to share it on social media using the buttons at the top of the page, or link to it from your own website.

12 thoughts on “Are Birds Mammals? Find Out In Our Definitive Guide!”