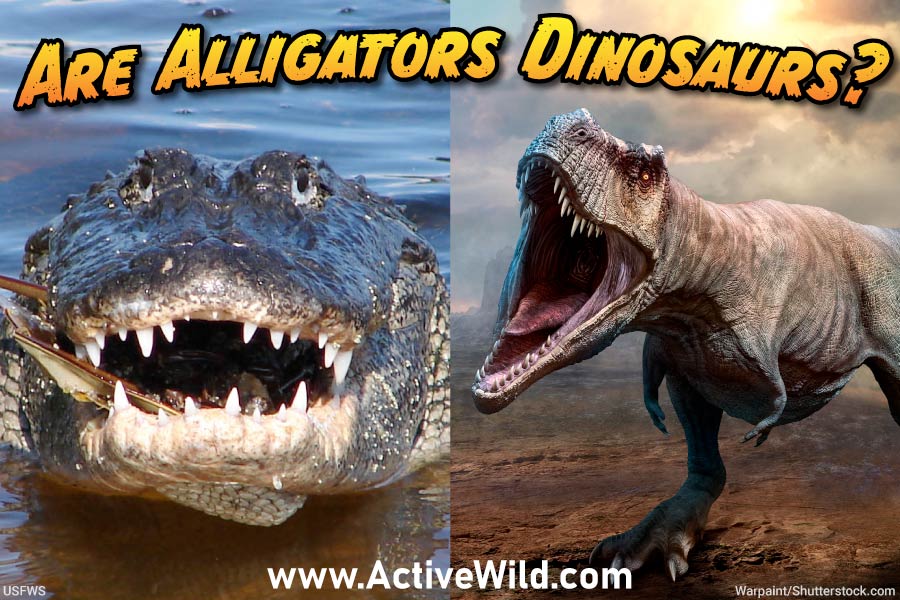 To understand why alligators are not dinosaurs, and how the two groups of animals are related, we need to go back millions of years in the reptile family tree to the Mesozoic Era…

Alligators are reptiles of genus Alligator (a genus is a group of related animals).

Alligators belong to a group of reptiles known as crocodilians. This group is also home to all crocodiles, caimans and gharials.

Crocodilians are typically ambush predators that lurk under the water ready to grab unsuspecting prey in their powerful jaws.

The eyes and nostrils of a crocodilian are positioned on top of its head. This enables it to see and breathe while the rest of its body is hidden under the water.

Although the first alligators “only” appeared around 37 Mya (million years ago), crocodilians are truly ancient – crocodylomorphs (early crocodilians) were living over 200 Mya, during the Triassic Period.

Many of those early crocs would have been similar in both lifestyle and appearance to modern crocodiles.

How Are Alligators Related To Dinosaurs?

Reptiles are a major group of vertebrates (animals with backbones) that first appeared over 300 million years ago.

Crocodilians (including alligators) and dinosaurs also belong to the same reptile group: Archosauria.

Members of the reptile group Archosauria are known as archosaurs. The name Archosauria means “ruling reptiles”.

Archosaurs were the dominant land animals during the Mesozoic Era, a stage in Earth’s history that began around 252 million years ago.

Today, the crocodilians (including alligators) and birds (which evolved from dinosaurs) are the only remaining archosaurs.

The Mesozoic Era is known as “the Age of Reptiles”, because it was during this time that reptiles ruled the land, the sea, and for much of the time, the air.

Although mammals appeared during the Mesozoic Era, they were mostly small, often nocturnal animals.

The Cretaceous Period (and entire Mesozoic Era) came to an end around 66 Mya, when life on Earth was decimated by a mass extinction known as the Cretaceous–Paleogene extinction event. This was believed to have been triggered by an asteroid strike (but that’s another story).

Alligators And Dinosaurs Are Both Archosaurs

The reptile group Archosauria was particularly successful during the Mesozoic Era.

As we’ve found, both alligators and dinosaurs are archosaurs. The first archosaurs appeared at the beginning of the Triassic Period (and their ancestors, the Archosauromorphs, appeared millions of years before that).

This is important, because it means that, at some point in the Triassic Period, there lived an archosaur that was the ancestor of alligators and dinosaurs.

Long before the Pseudosuchia / Avemetatarsalia split, the archosaurs had already branched off from other reptile groups, including the ancestors of snakes, lizards and turtles.

This means that all archosaurs, including crocodilians such as alligators, and dinosaurs (and therefore birds), are more closely to one another than they are to other reptiles.

Another branch of avemetatarsalians would evolve into pterosaurs.

Dinosaurs were a highly-successful branch of archosaurs that first appeared in the Triassic Period.

Considering the fearsome reputation of the dinosaurs, it is perhaps surprising that, during the Triassic Period, it was those other archosaurs, the pseudosuchians, that were the apex predators.

The tables would be turned in the Jurassic Period.

The end of the Triassic Period was marked by a mass extinction (known as the Triassic–Jurassic extinction event) that killed off all of the pseudosuchians apart from the Crocodylomorphs – the earliest ancestors of today’s crocodilians.

The exact cause of the mass extinction is unknown, with the main theories being based around massive volcanic eruptions, an asteroid strike, or enormous environmental changes.

With their main rivals gone, dinosaurs were free to became the dominant land animals in the Jurassic Period. Evolution saw them diversify across many terrestrial niches, and their reign continued right up until the end of the Cretaceous Period.

At some point in the Jurassic Period, a group of dinosaurs began to evolve into birds.

This is why many scientists consider all birds to be dinosaurs (often using the term “avian dinosaurs” to separate birds from dinosaurs such as Tyrannosaurus rex and Deinosuchus, etc.).

The end of the Cretaceous Period was marked by a catastrophic event that resulted in the extinction of up to 75% of all species on Earth – including the dinosaurs.

This mass extinction was likely caused – or at least set in motion by – an asteroid strike.

Whatever the exact cause of the mass extinction, by the beginning of the Cenozoic Era, the time of the dinosaurs – at least, the non-avian dinosaurs – was over.

True crocodilians had evolved from their crocodylomorph ancestors during the Late Cretaceous.

The crocodilians were among the largest air-breathing animals to survive the Cretaceous-Paleogene extinction event. This may be due in part to their aquatic lifestyle, ability to scavenge for food, and ability to aestivate (enter a state of dormancy similar to hibernation).

Although crocodilians survived into the Cenozoic Era, they would remain confined to aquatic environments. On land, it would be the mammals’ turn to rule.

Alligators (and other crocodilians, such as crocodiles and caimans) are not dinosaurs. Crocodilians (including alligators) are also not directly descended from dinosaurs.

Alligators and dinosaurs are both archosaurs, therefore alligators (and other crocodilians, such as crocodiles and caimans) are the closest living (non-avian) relatives of dinosaurs.

Birds are today considered by most scientists to be dinosaurs. Because crocodilians and dinosaurs (including birds) share a common ancestor, birds and crocodilians are more closely-related to each other than they are to any other living reptiles.

You can find out more about the Mesozoic Era on the following pages: