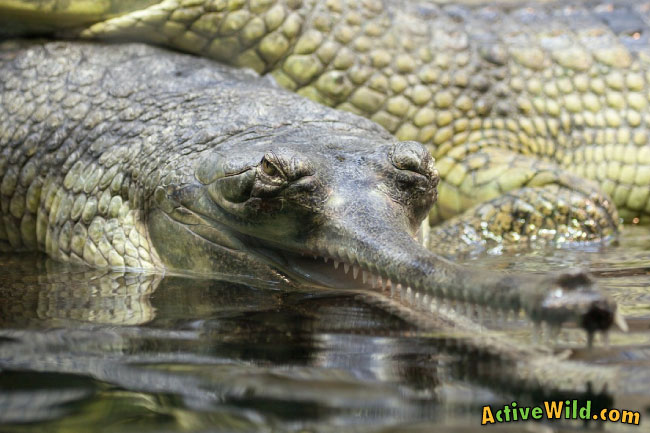 This page contains gharial facts for kids (and adults). This animal is part of the Active Wild Online Zoo: information, pictures and videos of all your favorite animals!

Watch the video below to see Gharials in the wild:

The gharial is a predatory reptile that lives in rivers of the Indian subcontinent. Looking very much like the crocodiles, alligators and caimans to which it is closely related, the gharial is a long, squat animal with scaly, armored skin and a powerful tail.

The gharial spends less time on land than any other crocodilian, and is less mobile when it ventures out of the water. It is one of the biggest crocodilians.

(Crocodilians are members of the Crocodilia order, which includes all crocodiles, alligators, caimans and gharials.)

The gharial’s slender snout is an adaptation for catching fish. The gharial can quickly snap its streamlined head from side to side under the water, catching its slippery prey in its thin, jagged teeth.

The adult male gharial develops a hollow ball-shaped appendage at the end of its snout. Its purpose is not fully understood, but is thought to be used to attract females.

The male gharial’s nose resembles an Indian cooking pot called a ‘ghara’, from which the gharial gets its name.

The gharial’s eyes, ears and nostrils are located on the top of its head, allowing it to lie almost fully submerged in the water.

Full-grown gharials have relatively weak legs, and are unable to lift their bodies off the ground. When out of the water they slide over the ground, pulling themselves along with their legs.

You can see how a large gharial moves in the video below:

Is A Gharial A Crocodile?

(An order is a large group of related animals).

Many people refer to all members of the Crocodilia order as ‘crocodiles’, so using this less exact definition of the word, the gharial could be considered to be a crocodile.

Where Do Gharials Live?

The gharial was once present all over the Indian subcontinent. Today, it inhabits only 2% of its former range. It is found in isolated groups in India and Nepal.

The map below shows the location of the Chambal River, in which around half of the world’s gharials are thought to live:

The gharial lives in deep, fast-flowing rivers, and is often found in pools of slower-moving water. It basks on sandy beaches close to the water.

What Do Gharials Eat?

The gharial is a specialist fish eater. It will also eat other small to medium-sized aquatic animals, such as amphibians (including frogs) and insects.

The gharial’s thin jaws limit it to eating small prey, and it certainly wouldn’t be able to eat a human!

The gharial reaches maturity in its early teens. The breeding season falls in December and January. During this time, males make hissing noises to attract a mate, and aggressively see off other males from their territories.

Females lay their eggs during the dry season. They crawl out of the water and dig holes, into which they lay around 40 eggs. Gharial eggs are the largest of all crocodilian species. The female gharial guards the nest from predators.

After around 3 months, the hatchlings begin to make chirping noises, and the female gharial digs them out of the hole. She stays with the hatchlings for a period of several weeks to several months.

Is the Gharial Endangered?

The gharial is critically endangered. In 2006 there were fewer than 200 adult gharials left in the wild. Nearly half of the world’s gharials are thought to live in the Chambal River in northern India.

Reasons behind the gharial’s endangered status include: over-hunting for their skins, eggs being taken for food, and being killed by fishermen.

The gharial’s river habitat is also under threat. The construction of dams and other structures that change the flow and course of rivers has contributed to the drastic decline in gharial numbers.

Q1. Where do gharials live?

Q2. What type of animal is a gharial?

Q3. What does the gharial mainly eat?