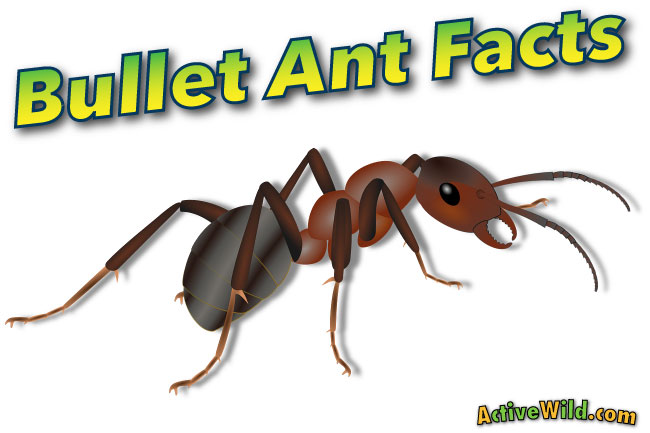 (Don’t miss the video of a television presenter getting stung by bullet ants at the end of the article!) 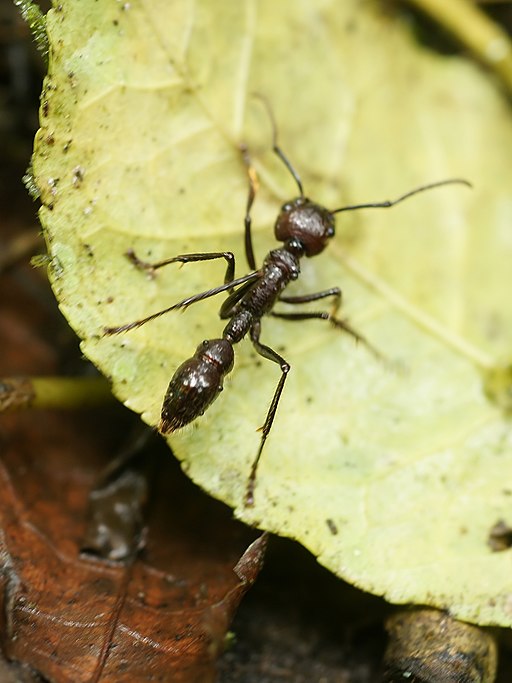 You can see what a bullet ant looks like in the video below:

The bullet ant is one of South America’s most famous insects. The reason for this large ant’s near mythical status is its exceptionally powerful sting, which is said to be the most painful of any insect. Indeed, being stung by a bullet ant is likened to being shot – hence the ant’s English name.

In Paraguay, the bullet ant is called tocandira, which is an indigenous word for ‘the one that wounds deeply’.

Where Does The Bullet Ant Live?

The Bullet Ant is found in the hot, humid rainforests of Central and South America. Countries in which the species is present include: Honduras, Nicaragua, Costa Rica, Venezuela, Colombia, Ecuador, Peru and Brazil.

One Of The World’s Largest Ants

Bullet ant workers are among the largest in the world, growing to around 30mm (1.2 in.) in length. Bullet ant queens are only slightly larger than the workers.

The bullet ant is reddish black, and has a large head. Its most noticeable feature is a pair of huge, gaping jaws. These jaws – called mandibles – are used for eating, not for stinging.

(The stinger is located at the end of the abdomen – we’ll find out more about the bullet ant’s sting further down the page!)

Bullet ant nests are usually found at the base of tree trunks; often on trees with buttress roots.

The Bullet Ant worker carries drops of nectar to the nest in its mandibles. Here the nectar is shared with other workers and the growing larvae. (Larvae are worm-like immature ants that are yet to change into their adult form).

Bullet ant colonies contain several hundred individuals. Ants in the same colony often differ in size and appearance depending on their role within the colony.

Workers forage for food and resources, soldiers guard the nest from intruders, and drones and queens reproduce.

Watch a television presenter get stung by bullet ants in the video below. (Warning: he ends up in a lot of pain!)

The bullet ant is famed throughout the world for the potency of its sting.

When threatened, the ant emits a strong warning odor. If the warning is ignored then the ant will attempt to use its sting.

The bullet ant’s stinger is located at the tip of its abdomen. This pierces the victim’s body and injects it with a venom called poneratoxin. The venom affects the victim’s nervous system.

According to the Schmidt Sting Pain Index, which ranks insect stings by pain, the sting of the bullet ant is the most painful of all the Hymenoptera (the group of insects that includes wasps, bees, and ants).

“Pure, intense, brilliant pain. Like walking over flaming charcoal with a three inch nail embedded in your heel.”

* An entomologist is a person who studies insects.

The bullet ant’s sting is not lethal, and its effects are not permanent. However, the unbearable pain lasts up to 24 hours and can cause temporary paralysis. This is why, in some countries, the bullet ant is called the ‘24-hour ant’.

Boys in Amazonian tribes prove that they are ready to become men by undergoing initiation ceremonies which involve bullet ants.

Hundreds of bullet ants are woven into special gloves, with the ants’ stingers facing inwards. The boys put their hands into the gloves, allowing themselves to be stung many times over.

By enduring the excruciating pain, the boys gain the respect of the tribe, and prove that they are ready to become warriors.

Q1. What does the bullet ant use to inject its venom?

Q2. Which habitat does the bullet ant prefer?

Q3. In which layer of the rainforest does the bullet ant do most of its foraging?

This animal is part of the Active Wild Online Zoo: information, pictures and videos of all your favorite animals!