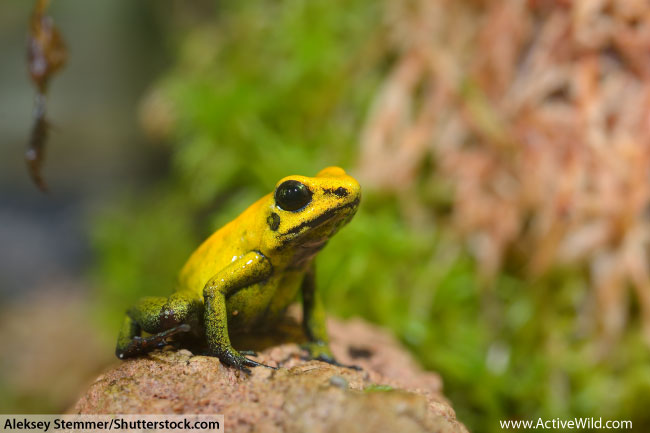 This page contains amazing golden poison frog facts for kids (and adults). This animal is part of the Active Wild Online Zoo, where you can find information, pictures and videos of all your favorite animals!

You can learn about the golden poison frog, and efforts being made to save this endangered amphibian, in the video below:

The golden poison frog is native to a small area on the Pacific coast of Colombia. Despite being only the size of a paper clip, this tiny amphibian is considered one of the deadliest animals on earth.

Where Does The Golden Poison Frog Live?

The golden poison frog inhabits rainforests with high rainfall and humidity and a temperature of least 26°C (82.4°F).

It is terrestrial (ground-living), preferring to be on the forest floor or on plants a few centimeters above the ground.

How To Recognize a Golden Poison Frog

Golden poison frogs are very brightly colored with large black eyes. They grow to a length of 1-2in (2.5-5cm) and adult females are typically larger than males. Unlike many frogs, the golden poison frog is active during the day.

Although yellow is the most common color seen, they are found in varying shades of yellow, orange and green. In nature, bright colors are often a warning sign to ward off potential predators.

What Does a Golden Poison Frog Eat?

The golden poison frog mainly eats ants, but will also eat other insects that are commonly found on the rainforest floor, such as termites, beetles and crickets.

The golden poison frog is a social animal, living in groups that contain an average of 6 members. Once or twice a year the frogs come together in large numbers to breed.

The females lay their eggs on the forest floor. The eggs hatch in two weeks, and the tadpoles attach themselves to sticky mucous on the male frog’s back.

The male frog then carries the tadpoles into the trees, depositing them in pools formed in the leaves of bromeliad plants. Here the tadpoles will undergo metamorphosis and become frogs. At this point the parents lead them to a permanent family group.

The golden poison frog uses distinct calls and movements as ways of communication. At breeding times, males attract females by using a variety of high pitched calls. In addition, a push-up movement is a sign of dominance, while lowering the head is a signal of submission.

The Poison of the Golden Poison Frog

The skin of the golden poison frog is densely coated in a toxin called batrachotoxin. The frog uses this toxin for self-defense; not for killing its prey.

A single golden poison frog has enough poison to kill ten humans or up to 10, 000 mice! The poison prevents the victim’s nerves from transmitting signals, which causes paralysis and heart failure.

Scientists are unsure exactly how the golden poison frog produces this incredibly potent toxin. It is thought that the ‘ingredients’ for the poison come from one of the insects the frog eats.

A golden poison frog that is raised in captivity and is not fed insects from its native habitat does not develop the poison.

Indigenous (native) people that live in the Colombian rainforests have used the frog’s poison on the tips of their blowgun darts for centuries. Incredibly the poison-soaked tips can remain potent for years.

Is The Golden Poison Frog Endangered?

The deforestation has led to the species being rated as “endangered” by the IUCN. The golden poison frog is likely to become extinct if its natural habitat is not protected.

There has been widespread destruction of the rainforests in which the golden poison frog lives, caused primarily by human development and changing farming practices.

Q1. Where can the golden poison frog be found?

Q2. What is the natural habitat of the golden poison frog?

Q3. What type of animal is the golden poison frog?