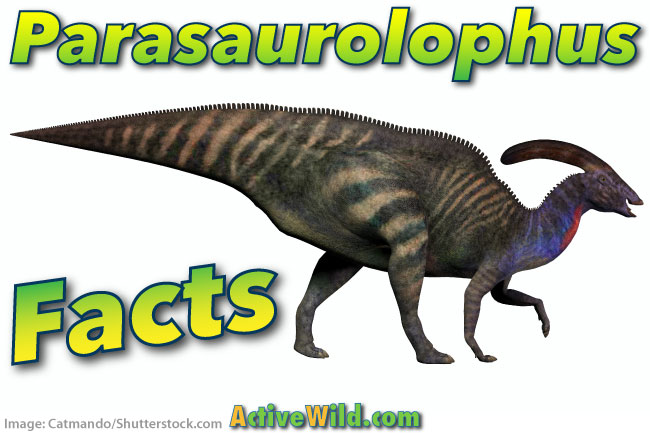 On this page you’ll find parasaurolophus facts and information for kids, students and adults. Let’s find out about this strange-looking Late Cretaceous dinosaur …

Parasaurolophus lived between 76.5 to 74.5 million years ago, during the late Cretaceous period.

The word ‘parasaurolophus’ means ‘near-crested lizard’. Parasaurolophus’s most distinctive feature was a large crest that emerged from the back of its head.

Scientists have put forward a number of theories as to what the crest was used for. The most likely explanation is that it enabled the parasaurolophus to make loud trumpeting calls.

(We’ll find out more about the crest further down the page.)

While not a giant, parasaurolophus was a relatively large dinosaur. It would have towered above an average human.

How Big Was Parasaurolophus?

You can see how big parasaurolophus was in the image below:

Parasaurolophus could walk on either two or four legs. Its tail was thin, but unusually tall.

Scientists think that the tail – and the crest – may have been brightly-coloured. This could have been used by males in order to attract females, or to help parasaurolophus to stay together in the undergrowth.

The specimen below is Parasaurolophus cyrtocristatus. It can be seen at the Field Museum in Chicago. 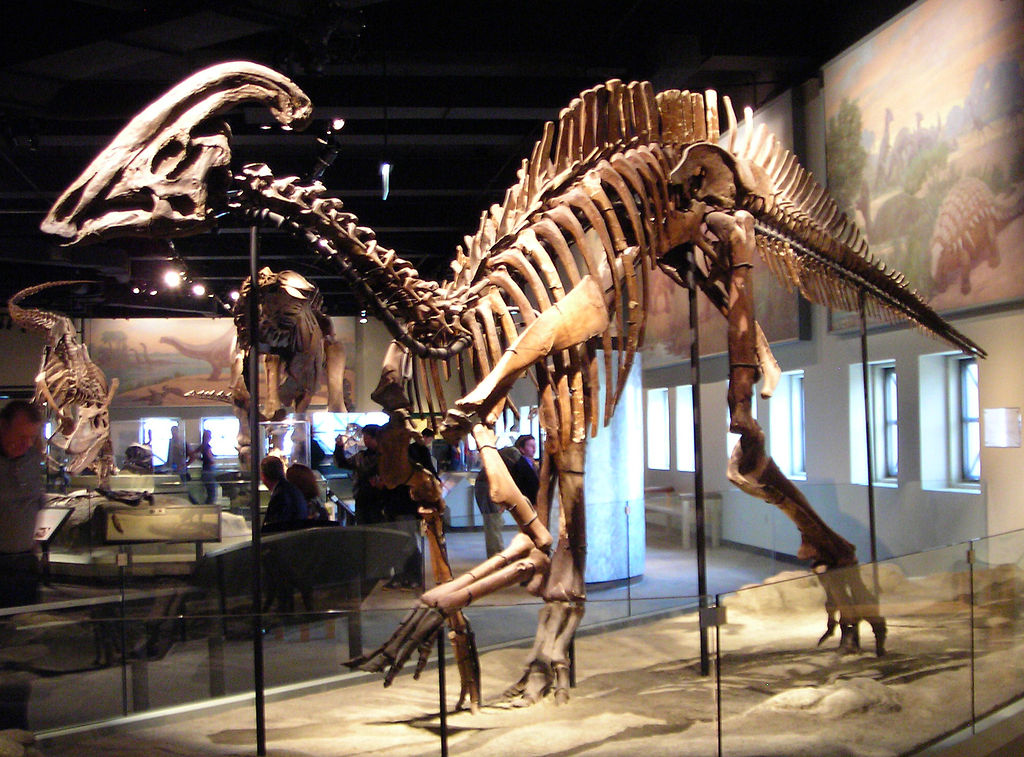 Where Did Parasaurolophus Live?

Parasaurolophus lived in what is now North America.

Fossil remains have been found in Alberta, Canada, and in New Mexico and Utah, USA.

Recent research has shown that there may have been a very closely related species in Asia, Charonosaurus (‘Charon’s lizard’), which was somewhat larger but otherwise almost identical.

What Type Of Dinosaur Was Parasaurolophus?

Parasaurolophus was a hadrosaurid, making it a member of the family of duck-billed dinosaurs.

Some hadrosaurids were known for their range of elaborate head adornments, including cranial (head) crests.

Parasaurolophus had a large and very distinctive bony crest that extended upwards from the back of its skull, reaching a length of 1.6 m (5.2 feet).

Each species of parasaurolophus had a unique crest structure. It is believed that the precise shape and colouring of the crest may have changed according to the age or sex of the animal.

(You can see these tubes clearly in the photo of the parasaurolophus skeleton, further up the page.)

What Was The Crest For?

Scientists have come up with all kinds of weird and wonderful explanations as to what parasaurolophus’s crest was used for. Some of these include the crest being: a snorkel; a weapon; an air store for breathing underwater; or as a means of pushing aside foliage while foraging for food.

However, most of these theories are now considered implausible. More recent studies conclude that the crest would have helped Parasaurolophus to identify one another, or to display the sex or physical condition of the animal.

The crest may also have been used for thermoregulation (controlling body temperature). Blood flowing near the surface of the crest would either have warmed up or cooled down the dinosaur.

However, by far the most intriguing possibility is that the crest was used as a resonating chamber. This would have allowed parasaurolophus to make loud, low frequency trumpeting sounds.

Parasaurolophus could have used these sounds for long-distance communication, similar to the way in which elephants and whales communicate today.

There is evidence that parasaurolophus had very good hearing, which would support this theory. Computer modelling of a parasaurolophus skull has even allowed researchers to replicate this deep and resonating sound coming from its ‘trumpet head’.

Parasaurolophus was a herbivore (plant eater), and lived in large herds. It could switch between bipedal and quadrupedal movement, meaning that it could either walk on two or on four legs.

If parasaurolophus needed to flee from a predator, for example, it would have run away on two legs. It would also have been able to rear up on its hind legs to reach vegetation up to 4 metres from the ground.

When parasaurolophus needed to forage close to the ground it could walk on all four legs. Parasaurolophus may have been more likely to use bipedal movement if young.

Parasaurolophus also had good eyesight, and its sophisticated jaws had a chewing motion that allowed it to feed on tough and fibrous vegetation.

Parasaurolophus fossils are rare. The first was uncovered by William Parks in 1922. Only a few specimens exist and a complete skeleton has yet to be discovered.

For this reason, much about parasaurolophus remains unknown. It may even be that the three species that have been identified are actually the same species in different stages of development, or different genders of the same species.

One of the most famous parasaurolophus fossils is ‘Joe’, a juvenile that was found by a high school student in Utah.

We hope that you have enjoyed finding out all about parasaurolophus. This strange-looking crested dinosaur proves that a dinosaur doesn’t have to be a meat eater like T Rex to be interesting!

If you want to become an instant dinosaur expert, check out our main dinosaur page, which has all the facts and information you need to know: Dinosaur Facts.