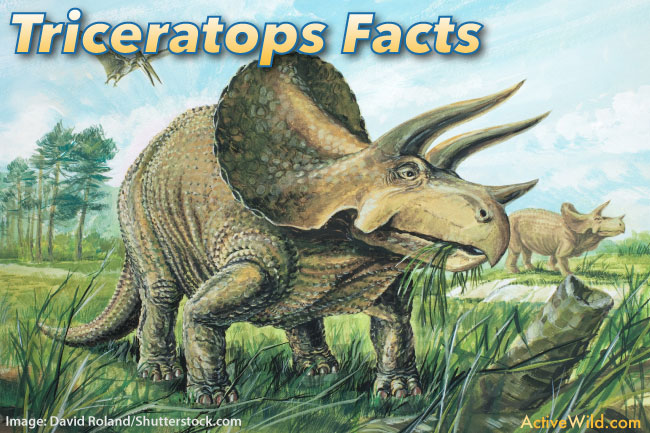 Triceratops facts for kids and adults. On this page you’ll learn all about one of the world’s most famous dinosaurs: the Triceratops. Read on for an in-depth look at this familiar Cretaceous animal …

Triceratops, whose name means ‘three-horned face’, is one of the most recognisable dinosaurs. Triceratops may have been a plant eater, but with its three fearsome horns, armoured frill and powerful body, it was no pushover.

It couldn’t afford to be: it lived at the same time, and in the same places, as the fearsome Tyrannosaurus Rex.

When Did Triceratops Live?

Triceratops lived towards the end of the Cretaceous period, appearing around 68 million years ago. It lived right up to the Cretaceous–Paleogene Extinction Event that wiped out the non-avian dinosaurs.

Where Did Triceratops Live?

Triceratops lived in the marshes and forests of North America. Triceratops fossils have been found in Colorado, Wyoming and Montana.

How Big Was Triceratops? What Did It Look Like?

Triceratops was squat and powerfully built, roughly the size of an elephant. It walked on four, thick legs, and had a short but powerful tail.

Triceratops’ face was dominated by three horns. A huge frill grew out from the back of its skull, covering its neck. It had a beak-shaped mouth for ripping off vegetation.

Triceratops’ skull was one of the largest in proportion to body size among all land animals. It made up almost one third of the dinosaur’s entire length. The largest known triceratops skull fossil is 2.5 m (8 feet); longer than a man is tall.

Triceratops Facts: What Were The Horns and Frill Used For?

Both the horns and frill were probably used defensively.

One of triceratops’ horns protruded from above its nose. The other two grew out forwards from its forehead.

In juveniles, the two forehead horns were short and stubby, and pointed backwards. As the animal matured the horns began to twist forward and straighten out.

The horns of a full-grown triceratops reached over 1 m (3 feet) in length. The horns provided defence against predators such as T. Rex. Triceratops may also have used its horns against other triceratops in battles to attain dominance, just as animals such as rhinos and deer use their horns today.

However, it may also have had other uses.

The area beneath the skin of Triceratops’s frill was heavily vascularized (covered with blood vessels). This means that Triceratops could have flushed it with blood, thereby changing or enhancing its colour in the same way we do when we blush.

Scientists speculate that the frill could have been used for communication, perhaps indicating an individual’s level of aggression, dominance, or other social expressions.

Alternatively, the frill may have helped in thermoregulation (controlling body temperature), by allowing heat to escape from the blood vessels. This would be similar to the way in which desert animals, like the fennec fox, lose heat through their ears.

Triceratops weighed almost as much as a Tyrannosaurus Rex, and wouldn’t have been an easy meal for the meat-eater. A large triceratops may even have been capable of fending off a T. Rex attack.

A charging Triceratops would have been capable of inflicting significant damage on any dinosaur.

However, T Rex did get its own way sometimes: its teeth marks have been found in triceratops fossils. Whether this was from scavenging or from predation is unknown.

What Did Triceratops Eat?

Triceratops was a herbivore (plant-eater), probably one of the most common of its time. It would have used its bird-like beak to eat shrubs and other low-lying vegetation. It may also have used its strength to knock over larger plants in order to acquire food.

Triceratops’ diet would have consisted mostly of palms, cycads or ferns, all of which were quite tough and fibrous and would have taken a lot of processing and digesting.

Fortunately, Triceratops had up to 800 teeth at its disposal, all conveniently arranged in ‘batteries’ which allowed it to replace old worn teeth with sharp new ones, similar to the way that sharks can replace lost or broken teeth.

Although triceratops was a common animal, there is little evidence to suggest it lived in herds. Most fossils have been of solitary individuals.

Groups of juvenile triceratops have been discovered in the Hell’s Creek formation in Montana, USA, and what appears to be a family group was found in 2012 in Wyoming, USA.

Triceratops was first identified from fossilised horns. The specimen below can be seen at the Los Angeles Natural History Museum.. 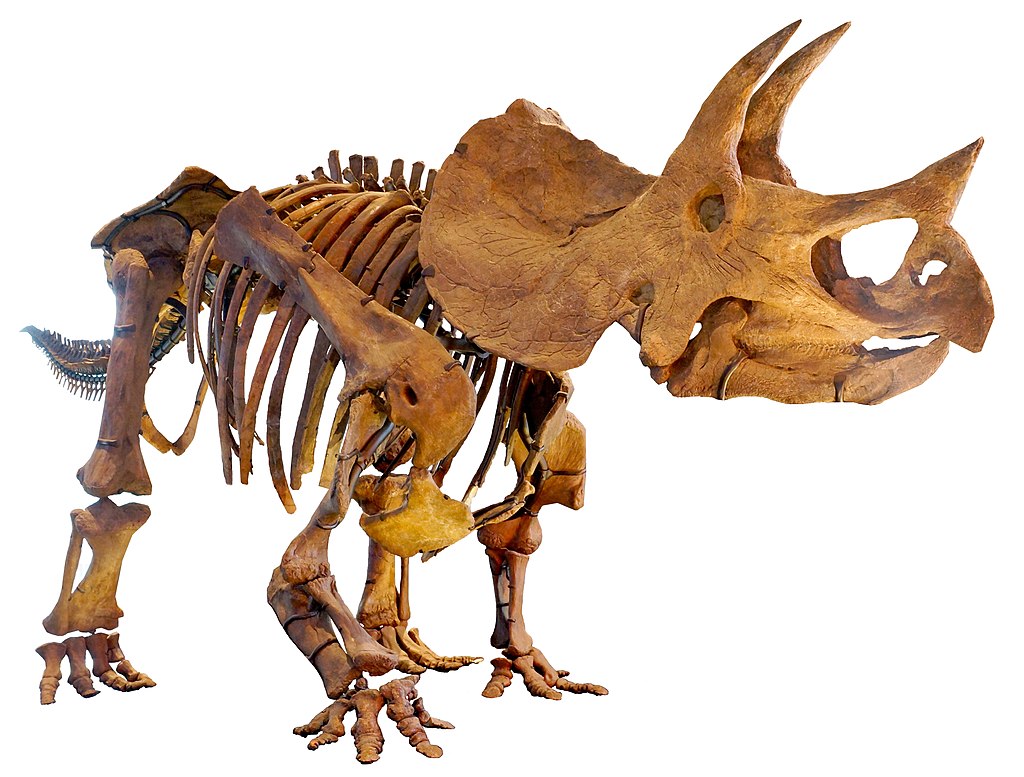 Triceratops was first described in 1887 by American Palaeontologist Othniel Charles Marsh, who had been sent some fossilised triceratops horns. At first, he thought that they belonged to an extinct species of bison. However, after later seeing other ceratops specimens, he realised that they were from a dinosaur.

Triceratops skulls were tough and built to last and have thus stood the test of time. Quite an astonishing number of fossilized skulls have been found, including over 50 from the Hell’s Creek formation.

One of the most famous triceratops specimens is ‘Cliff the Triceratops’, who can be seen at the Boston Museum of Science.

Currently, 2 species of Triceratops are recognised, namely Triceratops horridus and Triceratops prorsus, although considerably more species have been proposed.

However, like many things in palaeontology, things are never set in stone (sorry, that’s a very bad joke). It has been suggested that another genus, Torosaurus (‘perforated lizard’), which had fenestrae (holes) in its frill, may actually have been a mature form of Triceratops.

Yet another genus, Nedoceratops (‘insufficient horned face’), may have been a transitional stage between the two.

The three-horned, frilled Triceratops is one of the most famous dinosaurs. Present right up to the extinction event that killed off the non-bird dinosaurs, Triceratops was a common animal of its time.

We hope that this page has given you an insight into what we know – and what we don’t know – about this dinosaur’s life.