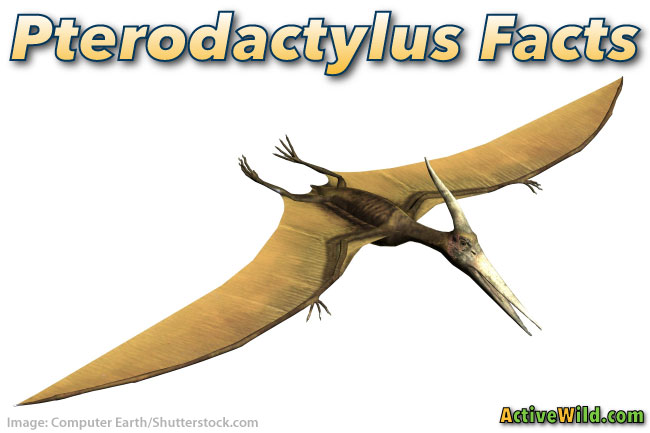 Pterodactylus was a flying reptile that lived in the Jurassic Period. It was a member of a larger group of flying reptiles called Pterosaurs. This page contains pterodactylus facts for kids, students and adults. Let’s learn about these early masters of the sky …

Just want the basics? Scroll down to the bottom of the page for a list of facts about Pterodactylus!

The word ‘pterodactylus’ comes from the Greek meaning ‘winged finger’. Pterodactylus had extremely long, specially adapted fourth fingers, to which its wings were attached.

Imagine that your fourth fingers were as long as you are tall, and that you had wings that stretched from the ends of these fingers to your legs! That’s how pterodactyls were built!

Below is an artist’s reconstruction of what a Pterodactylus may have looked like: 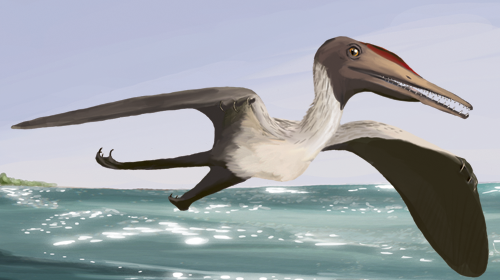 Pterodactylus was a relatively small pterosaur. Its wingspan is thought to have been around 1.04 meters (3.41 ft.). However, because no complete adult specimens have been found, this is an estimate based on similar species.

It’s likely that the heads and bodies of some pterosaurs were wholly or partially covered with fur, but it is unknown if this was present in pterodactylus.

Pterodactylus had a crest on the top of its head. It is thought that this crest grew as the pterodactyl aged, and was a sign of maturity.

How Did Pterodactylus Fly?

Pterodactylus, like other pterosaurs, was capable of ‘flapping flight’. This means that it could power itself through the air by flapping its wings – just like (most) modern birds. This ability set it apart from earlier winged reptiles that could only glide.

While on the ground, pterodactylus walked on all fours, rather than bouncing around on its hind feet like today’s birds.

There are several theories as to how pterodactylus took off. Some scientists think that they climbed up trees using their claws before launching, or that they launched themselves from cliffs. Others think that pterodactylus was able to spring into the air before using its wings to gain height.

You can see a video of a pterosaur taking off below:

What Was A Pterodactylus?

Pterodactylus was a member of a group of flying reptiles called Pterodactyliods.

Pterodactyl vs Pterosaur … vs Pteranodon!

Pterodactyliods were themselves members of the larger group of flying reptiles known as Pterosaurs. (Pterosaur means ‘winged lizard’.)

Pterodactylus is one of the best-known pterosaurs. This has led to the word ‘pterodactyl’ being used to refer to all pterosaurs.

As if that isn’t complicated enough, the word ‘pterodactyl’ is also used to describe any member of Pterodactyloidea.

It’s also used to refer to Pteranodons – another type of pterosaur!

Some of the confusion arose after different-sized Pterodactylus fossils were found. It was originally thought that these were from different species. Today, however, scientists think that they are all Pterodactylus antiquus, but that some are juveniles (young), whereas others are older. This accounts for the differences in size.

Other fossils that were incorrectly identified as being different Pterodactylus species are now thought to have come from different species entirely.

It’s very difficult when all you’ve got to work with is the incomplete fossilised remains of an animal that lived many millions of years ago!

What Did Pterodactylus Eat?

Pterodacylus was a carnivore. Its diet probably consisted of fish and other small animals.

The first Pterodactyl fossil was identified by Italian scientist Cosimo Alessandro Collini in 1784. It was also the first pterosaur specimen to have been found.

An engraving of this fossil can be seen below: 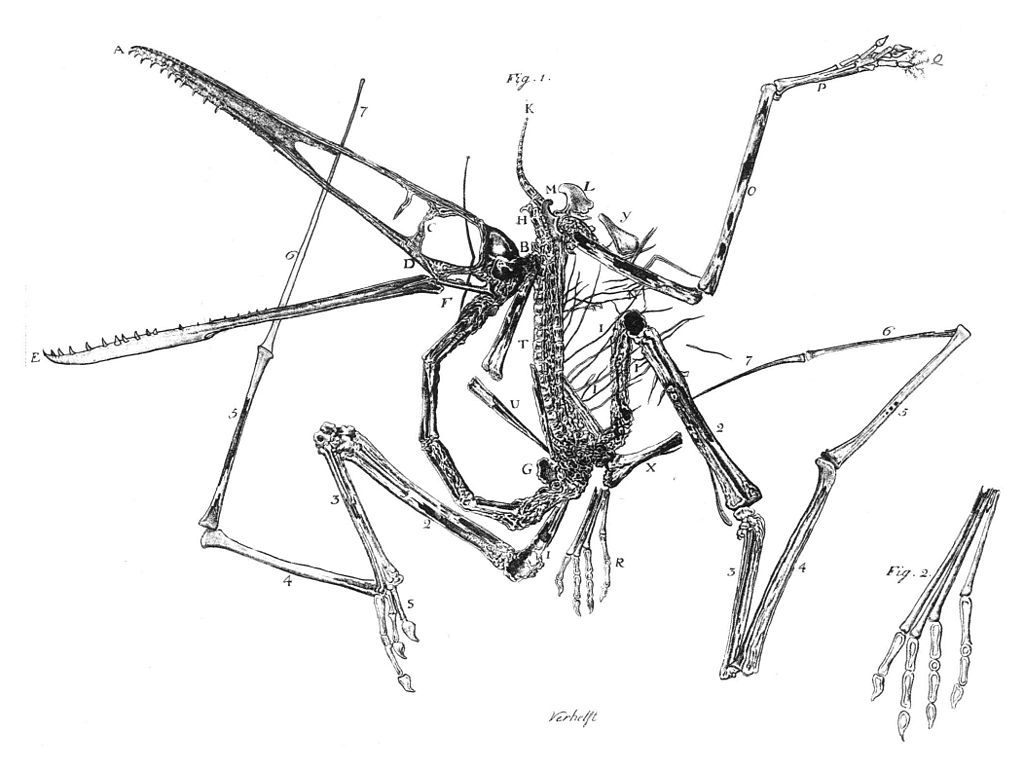 Collini thought that the animal had lived in the water, and that the long fingers had been attached to flippers.

The French zoologist Georges Cuvier recognised that the Pterodactylus was a flying reptile, and that its elongated fourth fingers were attached to wings. He invented the word ‘Pterodactyl’.

The fossil had been found in the Solnhofen limestone beds in Bavaris, Germany. Many of the best pterodactyl specimens have been found here.

Over 30 pterodactylus fossils have now been found. Many of these are complete specimens, although a complete adult specimen has still to be found.

Pterodactylus fossils have also been found in the south of England and in Tanzania in Africa.

When Did Pterodactylus Live?

Not The First Flying Reptiles, Not The Last

Pterodactylus may have been the first Pterosaur to have been discovered, but it wasn’t the first to have existed.

The first Pterosaurs appeared around 210 million years ago, in the late Triassic Period. They were the Rhamphorhynchoids. They had long thin tails, and shorter wrist bones and narrower wings than Pterodactyloids.

Pterodactyloids, including Pterodactylus, evolved from the Rhamphorhynchoids and appeared in the late Jurassic Period, around 60 million years later.

Pterodactyloids continued to evolve, and were present right up to the Cretaceous–Paleogene extinction event that brought the age of the dinosaurs to an end.

Pterodactylus is not a dinosaur. Pterosaurs (including Pterodactylus) share the same distant relations with dinosaurs, but are different types of animal.

Like dinosaurs, pterosaurs were members of a group of animals called Avemetatarsalia. This group had evolved from reptiles called archosaurs. However, at some point the group split into two main branches: the dinosaurs, and the pterosaurs.

Pterosaurs (including pterodactyls) are not birds. Neither are they early birds; birds actually evolved from dinosaurs, not from pterosaurs.

Just want the facts? Read the list below to become an instant Pterodactyl expert!

We hope that you have enjoyed learning all about the pterodactylus. Just imagine a world in which animals like this filled the skies!

The main facts to remember are that Pterodactylus was not a dinosaur, and that not all Pterosaurs are Pterodactyls!