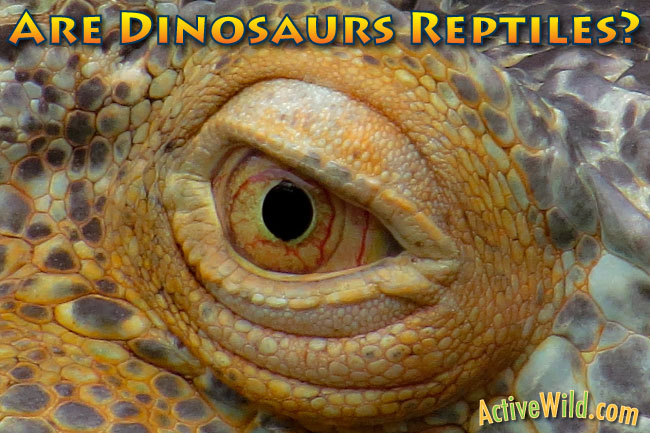 On this page, we answer the question are dinosaurs reptiles. In order to do so, we’ll need to investigate what makes a reptile a reptile, and we’ll also need to take a look at how dinosaurs evolved.

Just as you thought, the quick answer is yes, dinosaurs are reptiles.

At first glance, ‘are dinosaurs reptiles’ may seem like a very easy question to answer. After all, dinosaurs lived in the Mesozoic Era – the ‘Age of Reptiles’, they had scaly skin, they hatched from eggs, and even the word ‘dinosaur’ means ‘terrible lizard’ (lizards being a kind of reptile).

However, as you probably expected, there’s more to it than that.

The answer to ‘are dinosaurs reptiles’ depends on how animals are grouped together, or classified.

How Animals Are Classified

A whole branch of science, called Taxonomy, is involved with classifying and grouping living things.

Carl Linnaeus, an 18th Century Swedish botanist and zoologist, is known as the ‘Father of Taxonomy’. He invented a system of classifying living things. Many of his principles are still in use today.

Traditionally, animals were classified according to their physical characteristics.

For example, if an animal has four legs, is cold-blooded, has scales, and lays eggs, then it is most likely a reptile.

However, things change – especially in science, where nothing is taken for granted. (See this article to find out more: What Is Science?)

Grouping animals according to their physical characteristics alone – while still important – is no longer the only way of classifying animals.

Today, we also look at an animal’s ancestors in order to find out how it should be classified.

What Is A Reptile? A Traditional Approach

Reptiles are members of a class (a big group) of animals called Reptilia.

Reptilian characteristics include the following:

As we can see above, one of the defining characteristics of reptiles is that they are cold-blooded.

But were dinosaurs warm-blooded or cold-blooded?

Here’s a quick recap of what the terms ‘cold-blooded’ and ‘warm-blooded’ mean:

An animal’s body needs to be at a temperature that allows it to work properly.

The bodies of warm-blooded animals can control their own temperature, and run at a different temperature to the environment. They do this in a number of ways, including shivering, and increasing their metabolism (how fast processes within their bodies work).

Another word for a warm-blooded animal is endotherm.

Cold-blooded animals, or ectotherms, don’t have the ability to control their body temperature. They are reliant on their environment, and have to seek shade in order to cool down, or bask in the sun to warm up.

At first, dinosaurs were believed to have been ectotherms (cold-blooded). It was thought that they were slow, sluggish animals, only able to live in the high temperatures of the Mesozoic Era.

Then, our view of dinosaurs changed.

Many, if not all, dinosaurs are now thought to be endotherms.

Using a variety of systems – including internal processes and physical features such as large size, feathers, plates and ‘sails’, it is believed that dinosaurs could regulate their body temperatures.

Although dinosaurs didn’t display all of the characteristics of modern reptiles (i.e. being cold-blooded), they were still considered to be reptiles.

Are Dinosaurs Reptiles: A Modern Approach

The modern way of grouping animals looks back at an animal’s ancestors. Animals with the same ancestors are grouped together.

This approach is called phylogenetics.

For example, we could go back millions of years ago and find the very first animal with reptilian characteristics. This would be the group’s most recent common ancestor. We would then consider all of its descendants to be reptiles – even if they’ve branched off into quite different species.

Of course, animals with the same ancestor are likely to share many of the same characteristics, so many traditional classification definitions still apply.

With this in mind, let’s see how dinosaurs evolved …

About 350 million years ago, a group of amphibians became less reliant on water. They gained the ability to produce eggs with shells, and their tough skin protected them from drying out when moving around on land. This meant that they could live in a wider variety of habitats, away from water.

These were the early reptile-like animals.

This group split into two branches: early mammals and reptiles.

The mammals kept quite a low profile for millions of years. Their time would come!

The reptiles, on the other hand, thrived. During the Mesozoic Era, the reptiles – in particular the dinosaurs – would become the dominant land animals.

The first reptiles split into several other branches, including the turtles, the swimming reptiles (including ichthyosaurs and plesiosaurs), lizards and snakes, and a group of animals called archosaurs.

Archosaurs then split into flying reptiles (Pterosaurs), crocodiles, and dinosaurs.

A particular group of dinosaurs then branched off and became birds.

Using the phylogenetic approach, not only are dinosaurs considered to be reptiles, but so too are all of their descendants – including birds!

On this page, we’ve looked at how animals are classified, what makes a reptile a reptile, and the evolution of dinosaurs.

We’ve found that in order to answer the question ‘are dinosaurs reptiles’, we have to know exactly what a reptile is.

We’ve found that, according to traditional classification methods, although dinosaurs were endotherms, they exhibited enough reptilian characteristics to be considered reptiles.

Using more modern classification techniques, we’ve also found out that not only are dinosaurs reptiles, but birds are too.

Not only that, but birds can also be considered to be dinosaurs, as they share a common ancestor with dinosaurs!

We hope that you’ve enjoyed this article. You can find more awesome dinosaur information in the following pages: