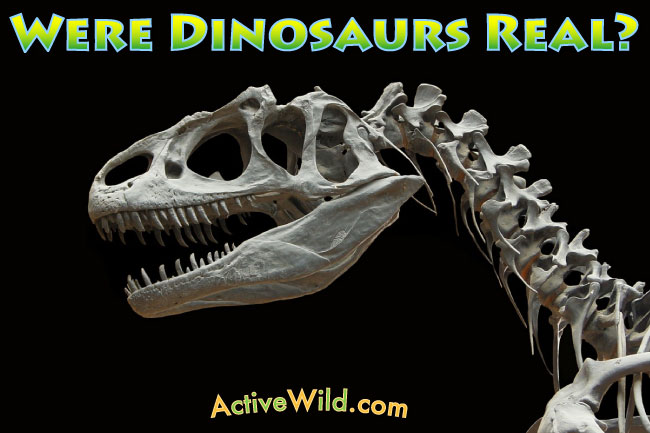 Were dinosaurs real, and if so how do we know about them? On this page, we’re going to find out!

It seems that a lot of people want to know if dinosaurs are real or not. It’s actually a good question. No human has ever seen a dinosaur – they died out tens of millions of years before humans appeared on the scene.

Dinosaurs left us clues in the form of fossils. The fossilised remains of dinosaurs have been found all over the world. It’s from these we know that dinosaurs were real.

Further down the page, we’ll find out how fossils are formed, and where you can go to see dinosaurs for yourself!

The (Second) Rise of the Dinosaurs

It’s not surprising that dinosaurs have found a place in our hearts: they’re unlike anything that exists on Earth today.

Dinosaurs came in many shapes and sizes, but it’s the big meat eaters such as T Rex, and the huge plant eaters such as Apatosaurus, that really capture our imaginations.

Just think what the world would have been like when these things were alive!

Today, dinosaurs have risen again. Thanks to mass media, nearly everyone on Earth can picture what a dinosaur looks like. They seem to be everywhere: on TV, in films, in books, in adverts, and even on clothes!

All of the images of dinosaurs we see, unless they’re the fossilised remains of actual dinosaurs, are largely the work of our imagination.

How ‘Real’ Are The Dinosaurs We Know?

Remember, no one has ever taken a photo of a dinosaur! The colours, shapes, sounds and behaviour of every dinosaur in the media have all been guessed at. Often these are ‘educated guesses’, based on real science, but sometimes our imagination does tend to carried away!

For example, as we found in our Velociraptor article, the real velociraptor looked very different to the animal that appeared in the Jurassic Park films (although they were awesome!).

We know that dinosaurs were real because we’ve found their fossilised remains. Dinosaur fossils have been found on every continent – even Antarctica.

Scientists who study dinosaur fossils are called palaeontologists (in America it’s spelt paleontologist). They use their knowledge of rocks, chemistry, zoology and other disciplines to build up a complete picture of what dinosaurs looked like and how they behaved.

There are many famous dinosaur fossil sites around the world. One of the best known is Dinosaur Ridge in Colorado, USA, where 19th Century palaeontologists found Apatosaurus, Diplodocus, Stegosaurus, and Allosaurus remains.

Dinosaur Cove in Australia is another famous fossil location. Many discoveries have been made there, including a Coelurosaur specimen.

In England, part of the south west coastline has been named the ‘Jurassic Coast’, on behalf of the fossils discovered there. Famous finds include an ichthyosaur skeleton, as well as plesiosaurs and a pterosaur. (Although none of these animals were dinosaurs, they were all from the same period in time.)

Fossils are formed when the remains of an animal (or plant) are covered in sediment. Minerals in the sediment are absorbed by the remains, and chemical processes slowly turn them to stone.

Fossils can also be formed when the remains are broken down completely, leaving only the shape of the animal in the surrounding rock. The rock containing the dinosaur-shaped hole becomes the fossil.

Another type of fossil is formed when sediment enters these holes and turns into rock.

Oh, and it’s not just animals and plants that can be fossilised. Coprolites – fossilised droppings – have also been found, as have dinosaur footprints.

Some fossils are incredibly detailed – considering their vast age – with skin, wings, and even feathers being visible.

Other fossils are little more than rocks. But even these can contain an incredible amount of information for a palaeontologist.

What Can We Tell From Fossils?

From dinosaur fossils we can piece together a surprising amount of information. Not only can we get an idea of what the dinosaur looked like, but we can also gain some understanding of how it moved, and how it behaved.

The depth at which a fossil is buried, and the kind of rock in which it was found, all give clues as to when the dinosaur lived.

(You can find out more about the periods dinosaurs were alive here: Dinosaur Periods.)

Where the fossil was found is important. It may have lived by (or in) a river, lake or the sea. It may have been found with lots of other specimens of the same dinosaur – this may suggest that it lived in herds.

By comparing dinosaur fossils with animals that are alive today, palaeontologists can work out if the dinosaur was a meat or a plant eater. They can also calculate how fast the dinosaur could run, how it moved and even how hard it could bite!

Sharp teeth, large brains and powerful jaws are all clues that the dinosaur was a meat-eater. Not only do you have to be strong and fast to be a predator, you also have to be smart.

Some dinosaur fossils have been found with injuries – these may have been caused by predators, or by fighting with members of the same species.

Were Dinosaurs Real: The Evidence

In Wyoming, a group of Triceratops of varying ages has been found. This suggests that they may have lived in family groups.

The oldest Triceratops in the group had injuries caused by Tyrannosaurus. From this we know that the two dinosaurs fought, and that at least some of the time Triceratops was able to see off the aggressor.

In Mongolia, a Velociraptor fossil was found entwined with that of a protoceratops. It is likely that the velociraptor was attacking the protoceratops before both animals were trapped by a sudden landslip.

Where to See Dinosaurs

If you still don’t believe that dinosaurs were real, then why not go and see them in the flesh? Okay, not in the flesh, but you know what I mean.

Many small, local museums have dinosaur fossils on display. However, if you want to get an idea of the true size of the biggest dinosaurs, then you’ll probably need to go a big museum with a dedicated dinosaur exhibition.

In Germany, there’s the Museum für Naturkunde. Here you can see the huge Giraffatitan – the largest mounted dinosaur in the world.

England’s Natural History Museum in London contains an Iguanodon, the skull of a Triceratops, and the giant, fish-eating Baryonyx.

At the Wyoming Dinosaur Center, you can see 28 mounted dinosaurs, including a huge, complete Supersaurus skeleton and the only Archaeopteryx in North America. The museum is situated near to actual dinosaur excavation sites, and you can even take part in the dig!

The evidence for the existence of dinosaurs comes in the shape of fossils. These rocky remnants of another age are all that we have as proof that dinosaurs existed.

From fossils we are able to piece together not only what dinosaurs looked like, but also how they behaved.

We hope that this article has helped to convince you that dinosaurs were real. We understand your scepticism – after all, we’re talking about huge animals that looked like monsters and were alive millions of years ago!

That’s what’s so incredible about dinosaurs. They lived on the same planet as us, but were in many way completely different to anything in existence now.

If you’re still unconvinced, then why not take a trip to a dinosaur museum? After all, seeing is believing!