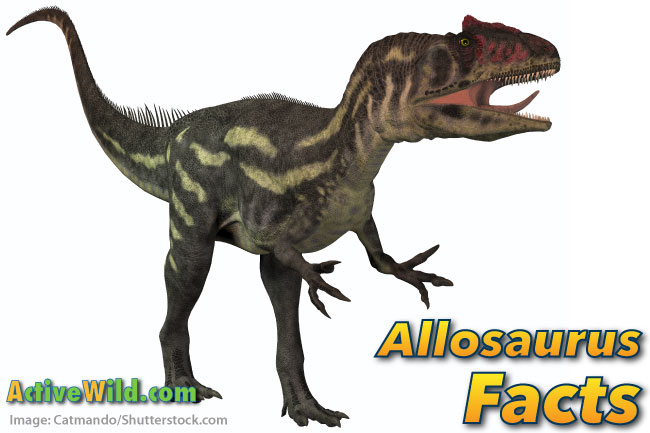 This page contains Allosaurus facts for kids (and adults). Here you can learn all about one of the biggest, fiercest Jurassic predators …

Allosaurus was a large, carnivorous (meat eating) dinosaur. It lived in the late Jurassic / early Cretaceous period, around 155 – 140 million years ago.

Most Allosaurus fossils have been found in the USA. Allosaurus would have lived alongside other Jurassic dinosaurs such as Diplodocus and Stegosaurus.

The name Allosaurus means ‘different lizard’ in Greek. It was given this name because it had a different type of backbone to other dinosaurs that had been discovered at the time.

While it was alive, the Allosaurus was one of the largest meat-eating dinosaurs. The formidable – and much heavier – Tyrannosaurus wouldn’t make an appearance until 50 million years later.

Allosaurus was a theropod. Early theropods were all carnivores like Allosaurus, but they would later evolve into insectivores (insect-eaters), herbivores (plant-eaters), and animals with various other dietary preferences.

Over millions of years – from the late Jurassic to the present day – theropods slowly evolved into birds. If you look out of a window ad see a bird, remember what its ancestors looked like!

Allosaurus was a large bipedal dinosaur. Bipedal means that it stood and walked on two legs. Its hind legs were long and powerful. Its arms, although strong, were much shorter.

At the end of each arm were three curved and pointed claws, which were up to 15 cm (6 in) long.

Allosaurus’ feet had three clawed toes, and a further smaller claw further up the foot.

Allosaurus jaws contained around 70 teeth. These pointed backwards, and were serrated to cut through flesh. These teeth were often lost, and would grow back.

Allosaurus jaws weren’t particularly strong. It is thought that rather than crushing bones, the jaws and teeth were used for ripping and slicing off flesh.

Allosaurus Facts for Kids: How Big Was Allosaurus?

Where Did Allosaurus Live?

Nearly all Allosaurus fossils have been found in the USA, with most being found in Colorado, Wyoming and Utah. Fossils that may have come from Allosaurus have also been found in Europe (Portugal), North Asia (Siberia) and Africa (Tanzania).

Of course, the world looked very different in the Jurassic era. There were no polar ice caps, and the continents were just starting to form into their present-day shapes. The North American continent had only just split from Eurasia.

What Did Allosaurus Eat?

Allosaurus was carnivorous, and probably preyed on a number of other Jurassic dinosaurs. Large sauropods, such as the Barosaurus, may have been on the menu.

Allosaurus may have hunted in packs to bring down the huge, long-necked dinosaurs. Large numbers of Allosaurus fossils found in one place may be evidence of this. 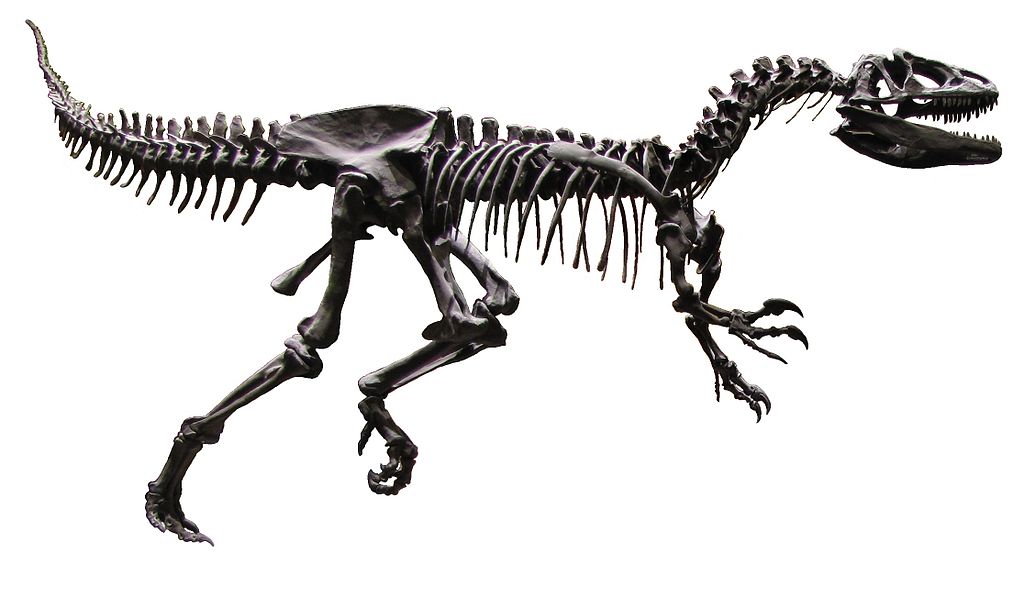 The first fossil that was (later) identified as Allosaurus was found in Colorado in the mid-19th Century.

Allosaurus was named in 1877 by American paleontologist Othniel Charles Marsh.

The Cleveland-Lloyd Quarry in Utah is also part of the Morrison Formation. Here, over 12,000 dinosaur bones have been found. Around 67% of these fossils are Allosaurus; scientists think that they come from around 44 individuals. This may suggest that Allosaurus hunted in packs.

Perhaps the most famous Allosaurus is ‘Big Al’. Big Al is the name given to a 97% complete Allosaurus specimen found in 1991 in the Howe Dinosaur Quarry, in Shell, Wyoming.

‘Big Al Two’ – an even better preserved specimen – was discovered in the same quarry in 1996.

Evidence of infections and broken bones suffered by the original Big Al have been incredibly important in piecing together Allosaurus behaviour.

Now that you’re an Allosaurus expert, why not take a look at our other dinosaur articles? Start here for a crash course in all things dinosaur: Dinosaur Facts.