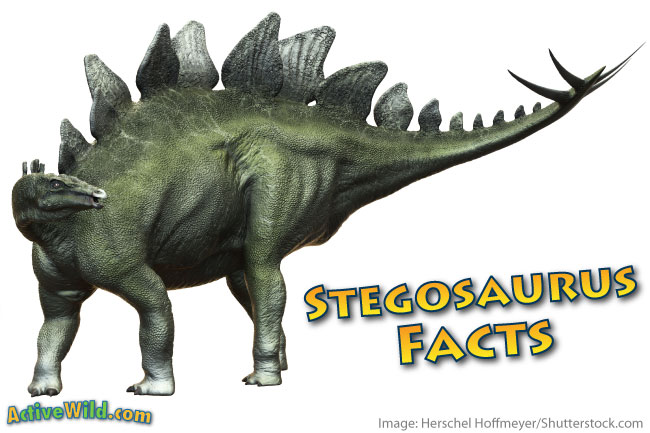 Stegosaurus facts for kids, students and adults. Let’s learn about this curious looking dinosaur of the Jurassic period!

With two rows of big bony plates running along its back, and a cluster of lethal spikes at the end of its tail, Stegosaurus certainly was a distinctive dinosaur.

Although smaller than huge sauropods such as Apatosaurus and Diplodocus, it would still have towered over a man and weighed as much as a big car.

Stegosaurus had a small, flat head and a turtle-like beak. It walked on four legs, and had hoof-like toes.

Its hind legs were much longer than its front legs, giving it a rather odd, ‘head down’ appearance. This would also have meant that it wasn’t very fast-moving. Scientists think that its top speed may have been around 6 or 7 km/h (3.5 or 4.5 mph).

Stegosaurus may have been able to rear up on its longer hind legs while supporting itself with its tail.

Stegosaurus was a herbivore (plant eater). Therefore, if you did happen to find yourself in the Late Jurassic period, you probably wouldn’t have had anything to fear from it. Unless it thought you were a threat, and started swinging that spiked tail around!

(If you want to know more about the Jurassic period, check out this article: Dinosaur Periods.)

What Does Stegosaurus Mean?

Stegosaurus was discovered in the 19th century. At first, paleontologists believed that its plates were positioned flat on its back, much like tiles on a roof. This led to the name ‘Stegosaurus’, which comes from the Greek for “roofed lizard”.

More Than One Species?

Stegosaurus was a member of the Thyreophora, or ‘armored dinosaur’ group of dinosaurs. This group also included the Ankylosaurs.

Stegosaurus is actually a ‘genus’ rather than an individual species. A genus is a ‘type’ of animal. It can include one or more very similar species.

Over the years there has been a great deal of debate among scientists as to whether there were several different species of Stegosaurus, or just one species which varied in size and appearance.

Currently, the three main recognized species of Stegosaurus are:

All were identified by American paleontologist Othniel Charles Marsh in the late nineteenth century. As more becomes known about Stegosaurus more species may be added – or some may be combined into a single species.

When Was Stegosaurus Alive?

Stegosaurus was alive 150.8 to 155.7 million years ago, during the Jurassic period. Other dinosaurs alive during this period were Apatosaurus, Diplodocus and Brachiosaurus.

(You can find out more about the different periods of the Mesozoic era here: Dinosaur Periods.)

Did Stegosaurus Have Any Predators?

Although it was big and heavily armored, Stegosaurus would have been preyed on by dinosaurs such as Allosaurus and Ceratosaurus.

How Big Was Stegosaurus?

Although Stegosaurus was by no means the biggest dinosaur, compared to most of today’s land animals it was a giant. The largest Stegosaurus grew to around 30 ft. (9 meters) long, and was around 2.75 m (9 ft.) tall. 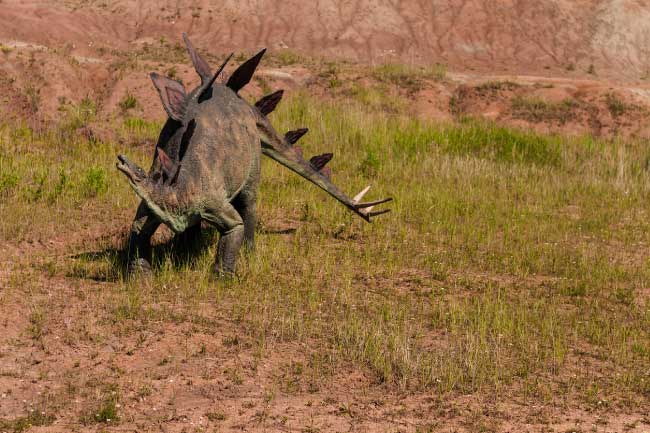 Stegosaurus had two rows of bony plates running down the middle of its back. They started just behind the head and continued almost to the end of the tail.

The plates were made from a hard, bone-like material. They weren’t attached to the skeleton, and grew out from the skin. They are examples of ‘osteoderms’ – bony structures, such as armored scales and plates – that grow in an animal’s skin. Osteoderms are found in many of today’s animals, including crocodiles.

The insides of Stegosaurus’s plates were latticed, with blood vessels running all the way through.

There are many theories as to what the plates were actually for. Were they purely defensive or did they have other uses? One theory is that they helped Stegosaurus keep its body at the correct temperature. The dinosaur could have turned so that its plates were either facing towards or away from the sun. This would either have warmed up, or cooled down, the dinosaur.

A recent argument is that the plates were for purely for display purposes. The bigger or more brightly-colored the plates were, the more attractive the dinosaur would have been to potential mates.

A modern-day equivalent would be a peacock’s tail. Although it doesn’t serve any practical purpose, its color and condition reflects the strength and health of the bird, making it more attractive to females.

Stegosaurus had a cluster of formidable spikes at the end of its tail. Many Stegosaurus fossil remains show damage to the ends of these spikes. This suggests that the spikes may have been used as a defensive weapon against predators.

Indeed, many Allosaur remains have been found with spike-type wounds in their bones. (Allosaurus was a large, carnivorous dinosaur that preyed on Stegosaurus.)

Like many dinosaurs, Stegosaurus isn’t thought to have been particularly intelligent. It had a small, narrow head, which had little space for a brain.

A popular Stegosaurus fact is that its brain was the size of a walnut. However, recent research has shown that it was nearer to the size and shape of a hotdog. However, for the Stegosaurus’s large size, this is still very small!

What Did Stegosaurus Eat?

Stegosaurus was a herbivore and fed on plants. Many herbivores have strong jaw muscles and large teeth to grind down tough the fibrous plant material, making it easier to digest.

Stegosaurus, however, had a weak beak, and no front teeth. It had small, peg-like teeth in the sides of its mouth, and a very inflexible jaw which restricted movement. It was likely to have stored food in its large cheeks, giving it plenty of time to chew its food before swallowing.

Because Stegosaurus’s hind legs were so much longer than its front legs, scientists think that its head would have been held close to the ground, and that it fed on low-lying plants (not grass, which only appeared in the Cretaceous period!)

However, if it could indeed have raised itself up onto its hind legs, then it would have been able to reach vegetation from higher shrubs trees.

Analyzing dinosaur behavior is always tricky – all that we know comes from fossil evidence that is millions of years old! However, scientists have been able to piece together how Stegosaurus may have lived from clues in the fossil record.

There have been multiple cases of Stegosaurus tracks being found together. This suggests that Stegosaurus was a social animal, and may have moved in herds.

A Stegosaurus group containing adults and juvenile specimens was found. This suggests that Stegosaurus lived in family units.

80 individual Stegosaurus remains have been found in the Morrison Formation – a well-known fossil site in Wyoming and Colorado.

Stegosaurus remains have also been found in other sites in Wyoming, plus much further afield in Portugal. This is evidence that the continents of North America and Europe were connected in the Jurassic period.

Did Stegosaurus Have Two Brains?

Scientists used to think that Stegosaurus had an auxiliary “brain” near its hind legs as its actual brain was so small! This theory has since been rejected!

Stegosaurus is one of the best-known dinosaurs, and has been portrayed in many films. We hope that this article has helped to separate the facts from the fiction!

You can find information on many other types of dinosaur here: Dinosaur List.

You can find out more about dinosaurs here: Dinosaur Facts.