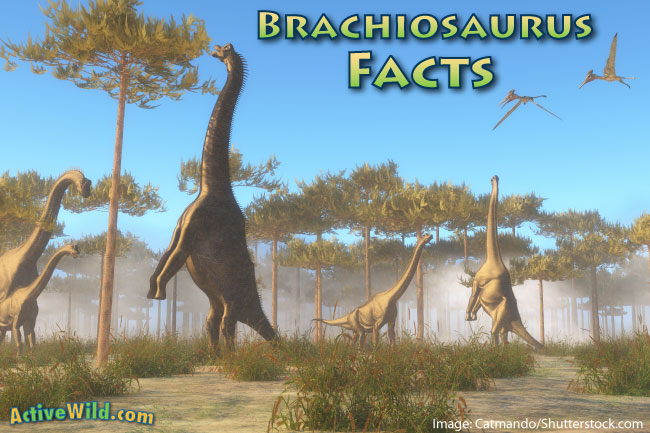 Brachiosaurus facts for kids and adults. This page contains in-depth information on this large plant-eating dinosaur.

Brachiosaurus was a huge animal, with four tree-trunk like legs and a long neck and tail. It would have used its giraffe-like neck to graze on vegetation that other dinosaurs couldn’t reach.

Brachiosaurus was a member of a group of dinosaurs known as the sauropods. Sauropods are characterized by their enormous size, long necks, and long tails. (Other sauropods include Apatosaurus and Diplodocus.)

Brachiosaurus carried its huge body on four sturdy legs. It had five toes on each foot.

At the end of Brachiosaurus’s long, slender neck was a small head. Large nostrils indicate that Brachiosaurus had a highly developed sense of smell. Its mouth was filled with spoon-shaped teeth, unlike those of most other sauropods, which were peg-shaped.

Brachiosaurus had a small brain and was unlikely to have been very intelligent.

Unlike most other sauropods, Brachiosaurus had front legs that were longer than its back legs. This meant that its shoulders were higher than its hips, and that its neck would have risen up, giraffe-like, from its torso.

Its body would have sloped downwards towards its tail.

Compared to other sauropods, Brachiosaurus had a short tail. Its thickness provided a counterbalance to the dinosaur’s top-heavy front end.

Brachiosaurus’s long neck was probably held erect. Brachiosaurus would have been able to reach vegetation 16 meters (52.5 ft.) from the ground.

Some portrayals of Brachiosaurus (including the one in Jurassic Park) show it rearing up on its hind legs. This was unlikely to have happened in real life. A huge animal such as Brachiosaurus would have to use vast amounts of energy to raise its front half from the ground. The small energy gain from the extra food would probably not have been worth the effort.

Due to its shape, Brachiosaurus was likely to have preferred flat ground. It is estimated that large dinosaurs such as Brachiosaurus could live for over 100 years.

Brachiosaurus is likely to have travelled in herds, although this is hard to establish conclusively from the fossil record. Females would have laid their huge eggs as they walked, rather than using nests. It is doubtful that any parental care was given to the offspring.

How Big Was Brachiosaurus?

Although Brachiosaurus wasn’t the biggest sauropod, it certainly wasn’t a small animal! It reached a staggering 25 meters (82 ft.) in length.

Estimates of Brachiosaurus’s weight range between 30 and 60 metric tons (33 and 66 short tons).

That’s about the same as thirty cars!

With its long neck extended, Brachiosaurus would have been around 12-16 meters (40-50ft) tall.

A grown man could easily have walked under a standing Brachiosaurus without hitting his head!

An adult Brachiosaurus was unlikely to have had any predators due to its large size. However, a young brachiosaurus would have been a target for the large carnivores present at the time, such as Allosaurus.

When Was Brachiosaurus Alive?

Brachiosaurus roamed the earth during the mid to late Jurassic period, around 155.5 to 150.8 million years ago.

(You can find out about the Triassic, Jurassic and Cretaceous periods here: Dinosaur Periods.)

The first Brachiosaurus fossil was found in 1900 by American paleontologist Elmer Riggs. It was found in the Morrison Formation in western Colorado – a well-known dinosaur fossil hotspot.

Since then, Brachiosaurus fossils have been found in many areas of North America, including Wyoming, Colorado, Oklahoma, and Utah. They have also been found in other parts of the world such as Portugal, and Algeria.

One of the best known Brachiosaurus specimens was found in the East African country of Tanzania by German paleontologist Werner Janensch. He worked for three years to unearth the fossils piece by piece. It now stands in Berlin’s Museum für Naturkunde.

Strictly speaking, however, this specimen isn’t a Brachiosaurus! Because of differences between it and specimens found in America, it was renamed Giraffatitan brancai in 2009.

What Did Brachiosaurus Eat?

Brachiosaurus was a herbivore, feeding only on plant material. Its large size made it ideally placed to feed on coniferous trees, and it would have also browsed on large shrubs.

Being so big, Brachiosaurus would have had to consume phenomenal amounts of food. It is estimated that it would have needed to eat 400 kg (880 pounds) of plant material each day just to survive!

Brachiosaurus’s big, chisel-shaped teeth (26 on the top jaw and 26 on the bottom) would have been ideal for stripping the vegetation from trees. However, they were not designed for chewing and Brachiosaurus would have swallowed its food whole.

Polished pebbles have been found with the remains of sauropods. This suggests that they were swallowed by the dinosaurs to help them digest tough vegetation. Modern-day birds do the same thing!

Scientist have often debated over the years whether Brachiosaurus was warm or cold blooded due to its large size, and the vast amount of food it would have required simply to stay alive. However, the general consensus is that it was a warm-blooded dinosaur.

This huge Jurassic dinosaur was slightly different to other sauropods, with its long front legs and short tail giving it a sloping appearance.