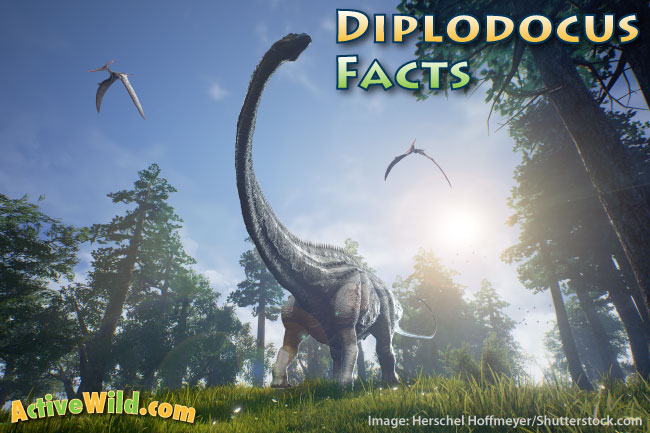 Diplodocus facts for kids, students and adults. This page is part of our Dinosaur Facts series.

Diplodocus is one of the best-known dinosaurs, and has been portrayed in many films and cartoons. In this article you’ll find out all about this plant-eating giant …

Due to the large number of Diplodocus fossils found since the first one was unearthed in 1877, this giant dinosaur is possibly one of the best known and most studied dinosaurs.

Diplodocus was a sauropod. This group of dinosaurs was characterized by their massive size, long necks and tails, and tree trunk-like legs.

When and Where did Diplodocus Live?

Diplodocus lived in the western part of North America towards the end of the Jurassic period, around 155 to 150 million years ago. It was one of many sauropods that lived during this time; others include well-known dinosaurs such as Apatosaurus, Brachiosaurus and Camarasaurus.

The carnivorous theropod Allosaurus was also present during this time.

How Big Was Diplodocus?

We can be fairly certain of Diplodocus’s size because we have a near-complete skeleton. There may have been dinosaurs that were longer than Diplodocus, but we can’t be sure of this because the specimens we have are incomplete.

Diplodocus’s nostrils were located on top of its head. This initially caused scientists to suggest that it lived underwater, breathing in the manner of present day dolphins.

However, this is unlikely to have been the case. Diplodocus’s great size would have prevented it from being able to fill its lungs with air while underwater due to the immense water pressure it would have experienced.

What Did Diplodocus Use Its Long Neck For?

The neck of Diplodocus contained 15 vertebrae. Mammals, even long-necked ones like giraffes, only have 7. How exactly Diplodocus held its neck, and what it was used for, are hotly debated issues.

Some scientists have suggested that Diplodocus held its neck parallel to the ground, believing that it would have struggled to pump blood to its brain if its head was held any higher. Calculations have been made suggesting that diplodocus’s heart would have had to be enormous in order to achieve this.

There are several theories on what Diplodocus used its long neck for. Suggestions range from feeding on submerged water plants to being used social interactions – perhaps as a weapon in the same way as male giraffes use their necks to battle rivals.

Whereas some researchers say that Diplodocus was unable to move its neck at all, others argue that it was flexible.

What Did Diplodocus Use Its Long Tail For?

Diplodocus’s name comes from an unusual feature of its tail, which has double (diplo) beamed (docus) chevron bones running along its underside. (Chevron bones are bones found in the tails of many reptiles.) This possibly provided support to the vertebrae (spine) or the blood vessels.

Diplodocus may have used its tail as a defensive weapon, whipping it back and forth like a monitor lizards does. Keratinous spines (keratin is the material that our hair and fingernails are made of) along the tip of its tail may have helped with this.

Diplodocus may also have used its tail to make a noise like the crack of a whip, possibly to ward off predators, or to communicate with other Diplodocuses.

Another interesting theory is that Diplodocus used its tail help it stand in a tripoidal position (on its back legs and tail) in order to rear its front end up to reach higher food.

We can’t be sure exactly what Diplodocus ate. Its diet may have consisted of underwater plants, or of leaves stripped from trees or soft ferns.

Diplodocus had small, peg-like teeth, which were only located at the front of its mouth. This meant that it was unable to chew its food. Therefore, it may have had to swallow stones or ferment its food in its large gut.

Diplodocus replaced its teeth on average every 32 days, suggesting that it ate quite rough or abrasive food.

We hope that you have enjoyed learning all about Diplodocus – one of the giants of the dinosaur world. Now that you’re a diplodocus expert, why not discover more about dinosaurs by checking out another article: