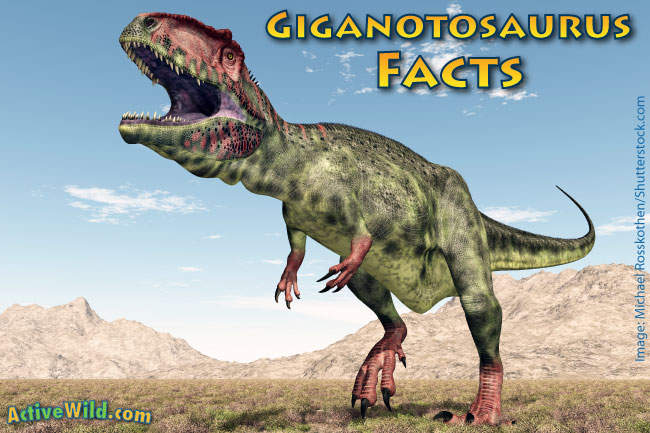 Giganotosaurus was a late Cretaceous predator, and one of the largest carnivorous dinosaurs. This page contains Giganotosaurus facts for kids, students and adults. Let’s find out all about this fearsome dinosaur …

(You can find out more about dinosaurs at our main dinosaur page: Dinosaur Facts.)

Giganotosaurus was found in what is now Argentina. It lived between 99.6 and 97 million years ago, during the late Cretaceous period.

(You can find out about the Triassic, Jurassic, and Cretaceous periods here: Dinosaur Periods.)

Giganotosaurus was a member of the Carcharodontosauridae (shark toothed dinosaurs) family. It is a fairly recently discovered dinosaur: the first fossil, comprising 70% of a complete skeleton, was only found in 1993.

A second fossil, consisting of little more than a piece of a lower jaw, was discovered in 1998.

Due to this scarcity of fossil evidence, there is still quite a lot that we don’t know about Giganotosaurus, including what it looked like as a juvenile, and just how large a fully-grown adult really was.

How Big was Giganotosaurus?

We know that Giganotosaurus is among the largest of all known terrestrial carnivores. However, because only incomplete specimens have been discovered, we can only make an educated guess – based on the fragments we have managed to find – how big Giganotosaurus really was.

The huge skull of Giganotosaurus would have been up to 1.8 meters (almost 6 ft.) in length; about the size of a man.

Giganotosaurus walked upright, and was able to maneuver quite capably due to its long tail, which acted as a counter-balance. Giganotosaurus had short, clawed arms. However, the lack of fossil evidence means that we don’t know exactly what they looked like or what they were used for.

We do know that Giganotosaurus’s brain was astonishingly small for such a large animal, and was about the size and shape of a banana.

Giganotosaurus’s teeth, however, would have been formidable weapons. Eight inches long, serrated, and shaped like blades, they would have been perfect for slicing through flesh.

How Did Giganotosaurus Hunt?

Giganotosaurus was certainly the apex predator (top of the food chain) in its environment. Evidence of Giganotosaurus teeth being found among Titanosaur fossils suggests that Giganotosaurus may have hunted this enormous herbivore. (Titanosaurs were large sauropods – the same type of dinosaur as Diplodocus and Apatosaurus.)

Giganotosaurus may have hunted large sauropods in packs; hunting such large dinosaurs alone would have been difficult and dangerous.

Giganotosaurus lived 30 million years before Tyrannosaurus and was found on a different continent. These two formidable predators would never have had a chance to meet.

However, should they ever have had come face to face, on the surface they would have seemed to be fairly evenly matched.

However, there are a few notable differences. For a start, Giganotosaurus was probably on average slightly larger than Tyrannosaurus (although neither of them were as large as Spinosaurus, an aquatic predator that lived even earlier in North Africa).

On the other hand, Giganotosaurus had a smaller brain than Tyrannosaurus and the force of its bite was probably around three times less.

Giganotosaurus was probably the faster runner, with a suggested top speed of 50 kph (31 mph) against Tyrannosaurus’s 40 kph (24 mph).

In a one-on-one contest, Tyrannosaurus would probably have had the upper hand. However, Giganotosaurus may have hunted in packs, while Tyrannosaurus is more likely to have travelled alone.

Tyrannosaurus wouldn’t have stood a chance against a group of larger and faster-moving Giganotosauruses.

When it comes to a dinosaur such as Giganotosaurus, it really is a case of piecing together the clues we have from the fossil record, and building up a picture of what it looked like and how it lived.

Perhaps this article has inspired you to take up paleontology – you may be the one who finds the world’s first complete Giganotosaurus fossil. If it was a new species of Giganotosaurus, you may even have it named after you!

I’m off to Argentina with my pickaxe – perhaps I’ll see you there?

You can find out more about dinosaurs in the following articles: