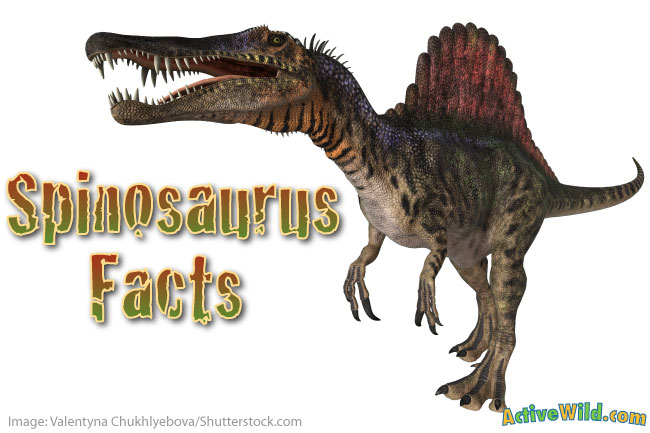 Spinosaurus facts for kids and students. Learn all about one of the biggest carnivorous dinosaurs ever to have walked the Earth …

You can read the whole page if you want to become a Spinosaurus expert, or you can jump straight to the facts you need using the links below:

Spinosaurus is one of, if not the, biggest meat-eating dinosaurs yet discovered. It’s also one of the most distinctive dinos, with a huge sail on its back and long, crocodile-like jaws.

Inside those jaws Spinosaurus had widely-spaced, cylindrical teeth. It also had short legs, and flat, paddle-like feet – all of which suggest that it was able to swim, and spent at least some of its time in the water, preying on fish

On this page, you’ll find out what Spinosaurus looked like, where it lived, what it ate and what scientists think its sail was for. We’ll also take a look at other members of the Spinosauridae family.

Thanks to a starring role in Jurassic Park 3, Spinosaurus has become one of the most famous dinosaurs.

You can see Spinosaurus in this clip from Jurassic Park 3. It’s a bit scary … but no one gets hurt!

The Dinosaur with a Fin on its Back

Spinosaurus was a giant meat-eating dinosaur that grew to lengths of 18 m (60 ft.). Spinosaurus probably walked on two legs, but scientists think that it may have been able to walk on all four legs too.

Spinosaurus had a huge sail on its back. This was supported by elongated vertebrae (bones that make up the spinal column). These bony spines were at least 1.65 meters (5.4 ft.) long. They would (probably) have been covered with skin.

Spinosaurus got its name, which means ‘spine lizard’, from these elongated spines.

A number of theories have been put forward as to what the sail was actually for. We’ll investigate some of these further down the page.

Some scientists think that instead of a sail, the long spines supported a fleshy hump on Spinosaurus’s back. Perhaps Spinosaurus had a bison-like hump rather than a marlin-like fin?

Spinosaurus had long jaws which widely-spaced, straight teeth. These would have been ideal for catching fish. Its nostrils were on the top of its snout, also suggesting a fish-based diet.

Spinosaurus had a small ridge on top of its head, just before its eyes.

Spinosaurus had relatively short hind legs, and proportionally longer arms than most other two-legged carnivorous dinosaurs. Scientists think that because of this, Spinosaurus would have spent at least some of the time walking on all four legs.

Other studies have shown that the length of Spinosaurus’s limbs would have allowed it to swim.


When Did Spinosaurus Live?


What Kind Of Dinosaur Was Spinosaurus?

Spinosaurus was a theropod. Theropods were a branch of two-legged, predatory dinosaurs that were present from the Late Triassic right up to the Cretaceous–Paleogene Extinction Event that wiped out the dinosaurs.

In fact, some theropods branched off and evolved into the ancestors of all birds, and are therefore still around today!

Spinosaurus is a genus of dinosaur. A genus is a ‘type’ of animal. A genus can either contain only one species, or several different (but very similar) species.

However, not all scientists are entirely sure that they are in fact different species.


Members of the Spinosauridae Family of Dinosaurs

Spinosaurus was a member of the Spinosauridae family. Dinosaurs in this family all possess distinctive, crocodile-like heads. Some also possess sails on their backs.

From fossilised teeth, we know that the Spinosauridae were present from the Late Jurassic period. However, they became more abundant during the Cretaceous Period.

The family takes its name from the Spinosaurus, but also includes dinosaurs such as Baryonyx, Suchomimus and Irritator (yes, there really is a dinosaur called an ‘irritator’!


What Did Spinosaurus Eat?

As we’ve found, Spinosaurus had many adaptations for a semi-aquatic lifestyle. Its long jaws were filled with widely-spaced, cylindrical teeth, which would have been ideal for catching fish.

Its nostrils were placed on top of its nose, nearer its eyes than other dinosaurs. This may have allowed it to wade with only its eyes and nostrils showing above the waterline.

Other spinosaurids are known to have been fish-eaters; fish scales have been found in the stomach of Baryonyx.


Where Did Spinosaurus Live?

Spinosaurus fossils have been found in the north African countries of Egypt, Algeria and Morocco. It would have lived alongside dinosaurs such as the plant-eating Ouranosaurus and the fearsome Carcharodontosaurus, a T-Rex-sized predator.

Spinosaurus didn’t have things all its own way. A Spinosaurus spine bone that was broken in half by a Carcharodontosaurus has been found.

What Was Spinosaurus’s Sail For?

There are several theories as to what Spinosaurus’s sail was actually used for. One theory suggests that it was a means of controlling body temperature.

Blood vessels close to the surface of the sail would have been warmed by the sun. This would have allowed Spinosaurus to warm up faster than other dinosaurs, giving it a head start when it came to finding prey.

Other theories suggest that the sail of Spinosaurus was brightly colored, and used by males to attract females – in much the same way as the male peacock uses its large, colorful tail.

Recent studies have found that the sail may actually have been used in swimming.

All that we know about Spinosaurus comes from six fossil specimens.

The first was a partial skeleton found in 1912 and named in 1915 by German palaeontologist Ernst Stromer. Sadly, this specimen was destroyed in World War 2, but detailed descriptions remain.

A reconstruction of this specimen can be seen below. 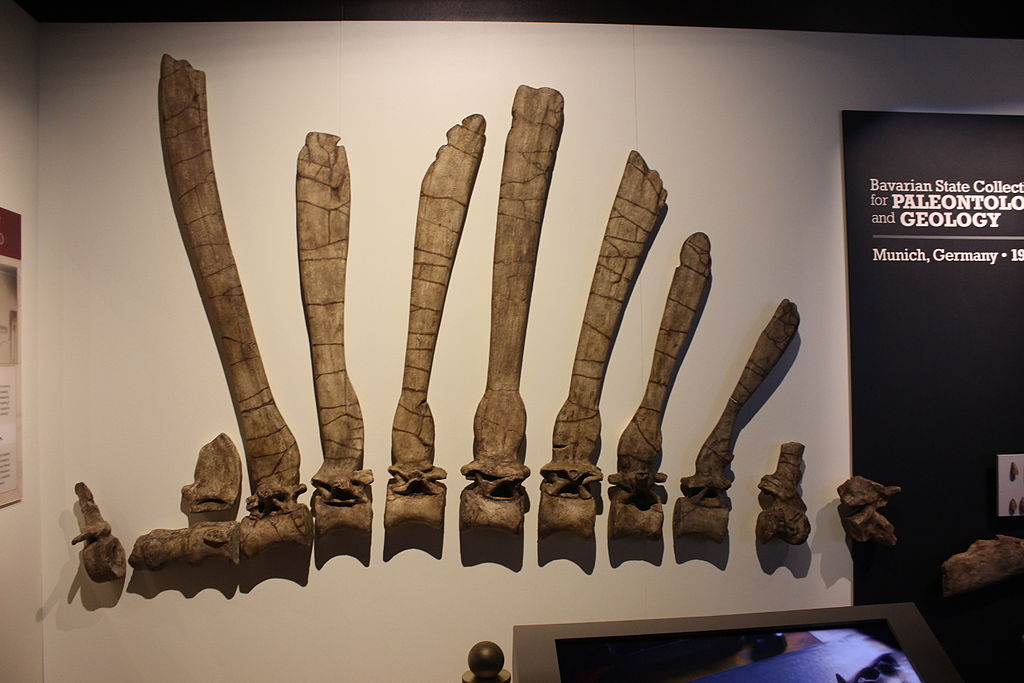 Only one other partial skeleton has been found; all of the other specimens are smaller body parts.

With T Rex being up to 12 metres (40 ft.) long, and weighing up to 9.5 tonnes, it was smaller than Spinosaurus. However, T Rex’s huge, powerful jaws and (probable) greater standing height would have made it an even match.

Some T Rex fans have disputed the outcome, saying that although Tyrannosaurus was smaller, it was stronger and had a more powerful bite.

However, Spinosaurus wasn’t just a fish-eater, and you only have to look at grizzly bears to know that part-time fish eaters can be pretty tough!

Of course, we’ll never know what would really have happened unless a John Hammond-like billionaire opens a real Jurassic Park!

All we can say with certainty is that a fight between a T Rex and a Spinosaurus would be an awesome – and terrifying – spectacle!

We hope that you have enjoyed reading about Spinosaurus.

Isn’t it amazing that all that we know about this Cretaceous giant comes from just six incomplete fossil specimens!