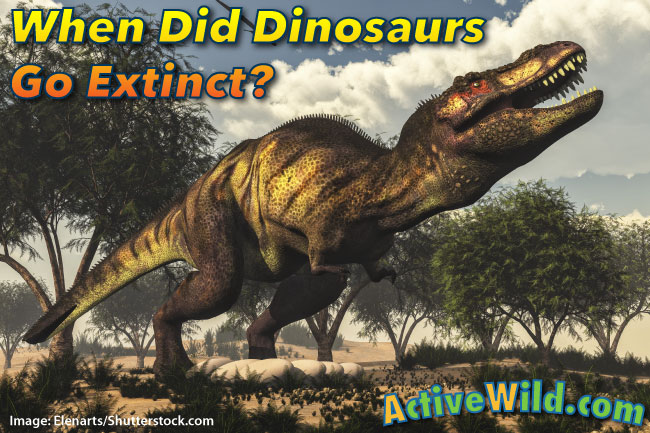 When did dinosaurs go extinct – on this page we’ll find out when dinosaurs became extinct, and we’ll also take a brief look at what may have brought about the end of the reign of the dinosaurs.

We’ll also investigate whether or not some dinosaurs may have survived … and if they’re actually alive today! It’s not as mad as it sounds …

When Did Dinosaurs Go Extinct?

Dinosaurs became extinct approximately 66 million years ago. (A more exact figure can be found further down the page.) This mass extinction didn’t just affect the dinosaurs; many other animals and plants also died out during this period.

In fact, the Cretaceous–Paleogene Extinction Event (as it is now known) wiped out approximately three quarters of all plant and animal species!

Exactly what caused dinosaurs to go extinct is unknown, but by far the likeliest explanation is that the Earth was struck by a large asteroid.

Why ‘K-Pg’ and not ‘C-Pg’? Well, K is the first letter of the German word Kreide, which means ‘chalk’. It is traditionally used as an abbreviation for the Cretaceous Period. (The word ‘Cretaceous’ comes from the Latin for chalk.)

Yet another name for the Cretaceous–Paleogene extinction event is the ‘Cretaceous–Tertiary (K–T) extinction’.

We’ll learn more about the event itself further down the page.

How Do We Know When Dinosaurs Became Extinct?

You may have heard terms such as the ‘Jurassic Period’, and the ‘Mesozoic Era’. These are names of periods in the Earth’s history.

The names weren’t just plucked out of thin air; they all correspond to layers of rock, which were formed during the periods they describe.

(You can find out more about when dinosaurs were alive here: Dinosaur Periods.)

Geology is the scientific study of rocks. Therefore, periods of time identified by rock layers form the geological time scale.

The more recent the time period, the higher the corresponding rock layer is found.

The layers of rock in which fossils are found give us an idea as to how old the fossil is. For example, Tyrannosaurus Rex fossils appear in Upper Cretaceous rock formations, letting us know that it was one of the very last dinosaurs.

Death from Space: The Asteroid That Killed the Dinosaurs

The most likely explanation for the extinction of the dinosaurs is that the Earth was struck by a large asteroid.

Estimated to have been around 10 km (6.2 miles) across, and travelling at 30 km per second, the meteor would have caused an explosion around 2 million times larger than the most powerful thermonuclear weapon ever tested.

Adding to the likelihood of the asteroid impact explanation, a crater that corresponds both with the size and the time of the Cretaceous–Paleogene extinction event has been located. It is known as the Chicxulub crater, and is found underneath the Yucatán Peninsula in Mexico.

Such an impact, as well as causing a devastating explosion, would also have sent up a thick dust cloud. This would have hidden the sun for months, if not years.

Plants would have been unable to grow, affecting whole food chains from the bottom up. Temperatures would have plummeted, causing further problems for species unable to adapt.

Cretaceous–Paleogene Boundary: Clues in the Rocks

It corresponds to the period in time after which no more dinosaur fossils were found.

Within this layer of rock there is a high amount of a metal called iridium. In fact, in the Cretaceous–Paleogene boundary there is 30 times more iridium than is usually found.

Other places where large amounts of iridium are found are at the centre of the Earth … and in asteroids.

This provides more evidence that 66 million years ago, the time the dinosaurs went extinct, Earth was hit by a huge asteroid.

Exactly When Did Dinosaurs Go Extinct?

Radiometric dating, in which the age of rock can be told by examining its radioactive qualities, shows that the Cretaceous–Paleogene boundary was formed 66,043,000 years ago, plus or minus 11,000 years.

Can We Be Sure It Was An Asteroid That Killed The Dinosaurs?

It is impossible to know exactly what caused the extinction of the dinosaurs. It may have been a combination of factors. Other possible explanations – or contributing factors – include:

How Long Did It Take For Dinosaurs To Become Extinct?

The width of the Cretaceous–Paleogene boundary suggests that it was formed over a relatively short period of time – possibly less than 10,000 years. Again, this is more evidence for a sudden, catastrophic event such as an asteroid strike.

Did ALL Dinosaurs Go Extinct?

It is now generally accepted that birds are the direct descendants of the dinosaurs. Many scientists now consider birds to actually be dinosaurs.

Therefore, throughout this article, we should have been talking about the extinction of ‘non-avian’ dinosaurs – i.e. those dinosaurs that hadn’t evolved into birds by the time of the Cretaceous–Paleogene Extinction Event.

Because, if you happen to look out of your window, you may be able to see dinosaurs that are very much alive and kicking!

When Did Dinosaurs Go Extinct: Conclusion

Around this time a thin layer of rock known as the Cretaceous–Paleogene boundary was formed. It appears between rock layers formed during the Cretaceous and the Paleogene Periods.

Radiometric dating has found that the Cretaceous–Paleogene boundary was formed 66,043,000 years ago, give or take 11,000 years.

The presence of iridium, a metal that is found in asteroids, in the Cretaceous–Paleogene boundary suggests that Earth was struck by a large asteroid around this time.

Not all of the dinosaurs became extinct; birds are now thought to be direct ancestors of dinosaurs. Some scientists even consider birds to be dinosaurs.

We hope that you’ve enjoyed reading this article, and now know what to say if anyone asks you when did dinosaurs go extinct!

If You Liked This Article, Read These Next: