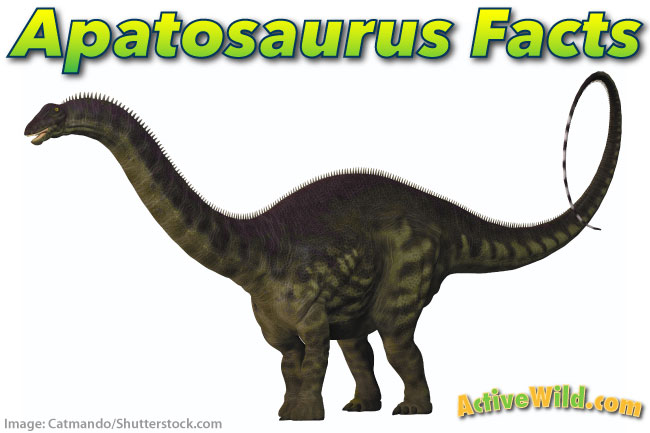 Learn all about Apatosaurus, a huge, herbivorous (plant-eating) dinosaur of the Late Jurassic period. This page contains Apatosaurus facts for kids, students and adults, and is part of our Dinosaur Facts series.

On this page you’ll find out just how big Apatosaurus was, what it ate and how it lived. You’ll also find out if Apatosaurus and Brontosaurus were actually the same type of dinosaur!

Apatosaurus lived around 152 to 151 million years ago, in the late Jurassic Period.

This plant-eating giant’s huge body was supported by four sturdy, tree trunk-like legs. Apatosaurus’s neck and tail were incredibly long. Its head and brain, in contrast to the size of its body, were small.

Apatosaurus’s long neck would have allowed it to reach high up in the trees for food. Apatosaurus would have been able to increase its reach even further by rearing up on its hind legs.

Apatosaurus was a Sauropod. Sauropods were a group of dinosaurs that included some of the largest animals ever to have walked the earth. You’ll find out more about sauropods further down the page.

While not the largest Sauropod, Apatosaurus was still one of the biggest dinosaurs of its time.

They could have been even bigger: some estimates suggest Apatosaurus could have weighed around 73 metric tonnes (80 short tons / 160,000 lb)!

Apatosaurus’s colossal body was supported by four column-like legs. The hind legs were longer than the front legs, and had three claws rather than one.

Apatosaurus would have left footprints that were 1 metre (3 ft.) wide!

Scientists don’t really know what the claws were used for. One idea is that the front claws may have been used to grab onto trees while the animal was rearing up on its hind legs.

Apatosaurus had a small head and a small brain. In its mouth were peg-shaped teeth with sharp, chiselled tips for eating vegetation.

Apatosaurus’s nostrils were positioned on top of the head. At first scientists thought that this was to allow the dinosaur to breathe while the rest of its body was underwater. However, since no Apatosaurus fossils have been found near water, the actual reason for this remains a mystery.

Many palaeontologists have speculated that Apatosaurus’s long, whip-like tail was used as a defensive weapon against predators. Some theories even say that Apatosaurus could crack its tail like a whip.

However, other theories suggest that this is unlikely as the tail would probably have been damaged in the process. Instead, it was probably used for balance.

Much like the growth rings of a tree, scientists can estimate the age of a dinosaur by studying growth lines in its bones.

Scientists have found that Apatosaurus grew quickly in the first ten years of its life, during which time it reached 90% of its size. After this time, it grew very slowly.

Scientists have estimated that Apatosaurus had a lifespan of over 100 years.

When Did Apatosaurus Live?

Apatosaurus lived in the Late Jurassic Epoch of the Jurassic Period, about 150 million years ago. It shared this time period with other well-known dinosaurs such as the Stegosaurus. Flying reptiles called Pterosaurs would have filled the skies.

The largest carnivore at the time was Allosaurus. Allosaurus looked similar to the infamous Tyrannosaurus but was smaller and had longer forearms than its famous cousin.

What Type of Dinosaur is Apatosaurus?

Apatosaurus was a Sauropod. Sauropods are an infraorder of dinosaurs. (An infraorder is a broad group of animals of the same type.) Sauropods are characterized by their large size, long necks, long tails, and small heads. There is little variation between sauropod species.

Other famous sauropods include Brachiosaurus and Diplodocus. Apatosaurus was a member of the Diplodocidae family.

First appearing in the Late Triassic Epoch, sauropods were widespread by the late Jurassic Epcoh (150 million years ago). However, by the late Cretaceous, most of these large dinosaurs had disappeared and had been replaced by other species.

Due to its huge size, many scientists argued that Apatosaurus wouldn’t have been able to support its body weight on land and must have therefore been aquatic. They speculate that Apatosaurus lived in lakes and rivers and foraged on the many plants found there.

However, further investigations into its body structure have shown that Apatosaurus had many adaptations that allowed it to live a terrestrial (land-based) lifestyle.

One of these adaptations was having a spine that was made up of hollow bones like those found in birds. This helped to reduce its weight.

Apatosaurus also had air-sacs in its neck which were connected to the lungs. (Birds have a similar system.) These allowed oxygen to be obtained more efficiently. They would also have helped to reduce the weight of the neck.

Being so big was not without its problems. Scientists think that Apatosaurus would have had to keep its neck and head horizontal for much of the time. This is because its heart would have struggled to pump blood up to its brain for long periods. 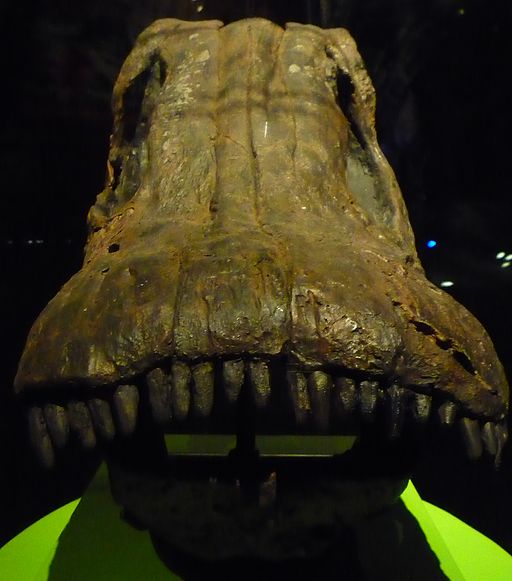 Apatosaurus was herbivorous, and fed only on vegetation. The main plants available at the time would have been ferns and conifers. Apatosaurus may have used its long neck to graze, swinging its head from side to side across the ground in a ‘mowing’ motion.

Despite its peg-shaped teeth, Apatosaurus would often swallow food whole. It would eat stones to aid digestion, as they would grind up food in the stomach.

Like cows today, Apatosaurus would likely have used microbes in the gut to aid digestion. This would have resulted in the production of methane, a greenhouse gas, just like commercial cattle do in the modern world.

Due to Apatosaurus’s size, scientists estimate that it could have had a small yet significant impact on the climate.

Our understanding of dinosaur behaviour is mostly speculation. Don’t forget, all we have to go on are the fossilised remains of species that lived hundreds of millions of years ago!

What we know of dinosaur behaviour is based on the positioning of fossil remains, other clues drawn from injuries, etc. to the specimens, and by comparisons with similar, extant (living) species.

What we do know is that Apatosaurus hatched from eggs, and that these eggs were at least a 12 inches (30 cm) wide. Apatosaurus egg remains have been discovered positioned in lines, suggesting that they were laid while the female Apatosaurus was walking along.

Young would have been born as fully-formed, miniature Apatosaurus. Like most modern day reptiles, they would probably have received no parental care.

The Dinosaur Formerly Known As Brontosaurus

However, because the specimen in the American Museum of Natural History was titled Brontosaurus, this was the name that came into common usage. Books, films and TV programmes all referred to the dinosaur with its original, incorrect, name.

However, the story doesn’t end there. Studies in 2015 have found that there is enough difference between Apatosaurus and Brontosaurus for them to be considered different genera (i.e. different types of animal). Not all scientists agree with this finding, but it could be that Brontosaurus is once again Brontosaurus!

Apatosaurus means ‘deceptive lizard’, but this wasn’t due to the Apatosaurus / Brontosaurus debate: it was because some of its bones resembled those of a mosasaur.

Apatosaurus was a huge sauropod dinosaur that lived in the Late Jurassic period. It was a plant-eater, and a member of the Diplodocidae family.

We hope that you have enjoyed learning about Apatosaurus. Now you know all about this giant sauropod, why not go on to be a dinosaur expert by visiting our main Dinosaur Facts page?