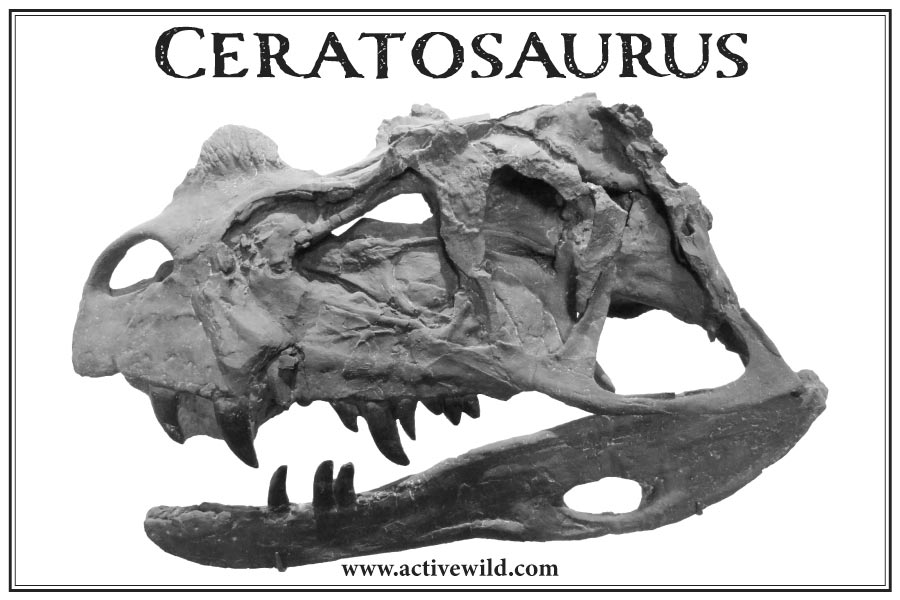 Ceratosaurus was a genus of mid-sized, predatory dinosaur that lived in North America in the Late Jurassic. Unconfirmed Ceratosaurus fossils have also been found in Africa and Europe. A number of features distinguish Ceratosaurus from other theropods. These include very long teeth, a row of bony plates running along its back, and, most famously, a horn on its nose and another above each eye.

Ceratosaurus had a typical theropod body shape, with long hind legs, short forelimbs, and body held in a horizontal posture, with a long tail balancing the large head.

The teeth of Ceratosaurus were very long, particularly those of the upper jaw, which were 7 to 9.3 cm / 2.76 to 3.67 in. in length, not including the root. The teeth were curved, with serrated edges.

Each of Ceratosaurus’ hands had four fingers. This distinguishes Ceratosaurus from most other theropods (which typically have three fingers), and is a feature more often seen on early theropods, such as Eoraptor.

Ceratosaurus had three clawed toes on each foot, and another, smaller claw positioned further up the leg and pointing to the rear (similar to a dog’s dewclaw).

Running along the back and tail of Ceratosaurus was a row of bony plates (scutes), a feature not known in other theropods. These plates may have been used as display (for example to demonstrate the dinosaur’s fitness to potential mates), or as a means of controlling body temperature.

One aspect of Ceratosaurus’ appearance that distinguishes it from most other theropods is the horn on its nose and the horn-like ridges above its eyes.

The horns are unlikely to have been used for hunting prey, but may have been used as weapons against rival Ceratosaurus in fights to establish dominance.

Alternatively, Ceratosaurus’ horns may have been used solely for display – for example, as a means of advertising an individual’s fitness to potential mates. If this is the case, paleontologists suggest that the horns may have been brightly-colored.

When Did Ceratosaurus Live?

Ceratosaurus lived from around 161.2 to 145 million years ago, during the Oxfordian and Tithonian ages of the Late Jurassic epoch.

What Dinosaurs Did Ceratosaurus Live With?

Ceratosaurus shared its habitat with Allosaurus and Torvosaurus, both of which were larger predators.

Ceratosaurus was heavily outnumbered by Allosaurus in areas where both dinosaurs were present. Paleontologists think each dinosaur would have specialized in a particular type of prey or habitat to minimize competition.

There is evidence to suggest that Ceratosaurus specialized in aquatic prey, such as fish and turtles. Its long, deep tail may have been an adaptation for swimming, and Ceratosaurus fossils are often found in areas in which water was present.

Where Did Ceratosaurus Live?

Ceratosaurus lived in what is now North America. Fossils found in Europe, South America and Africa have also been attributed to Ceratosaurus, but their validity is not confirmed.

The first Ceratosaurus fossil was discovered by farmer Marshall Parker Felch in rocks of the Morrison Formation in Colorado. The specimen was identified and named American paleontologist Othniel Charles Marsh.

The Morrison Formation is a layer of sedimentary rock formed in the Late Jurassic situated in parts of Wyoming, Colorado, and surrounding states. It is the site of many important fossil finds.

Ceratosaurus is a relatively rare dinosaur, with only a handful of fossils having been found since the genus was discovered. Most, if not all, were discovered in various locations within the Morrison Formation in Utah, Colorado and Wyoming.

Fossils from Portugal and Switzerland in Europe, Uruguay in South America, and Tanzania in Africa have also been identified as belonging to Ceratosaurus, although these are unconfirmed.

What Type Of Dinosaur Was Ceratosaurus?

Ceratosaurus was a theropod dinosaur, and like all theropods was a saurischian. (Saurischia is one of the major dinosaur groups.)

Ceratosaurus belongs to the family Ceratosauridae, along with Genyodectes, another North American dinosaur from the Jurassic Period.

Ceratosaurus makes a fleeting appearance in Jurassic Park III. The dinosaur confronts paleontologist Dr. Alan Grant (played by Sam Neill) after he and other members of his party have been searching for a cellphone in a large pile of Spinosaurus dung. The Ceratosaurus takes one look at the dung-covered humans and decides to leave them alone!

You can see the clip below: