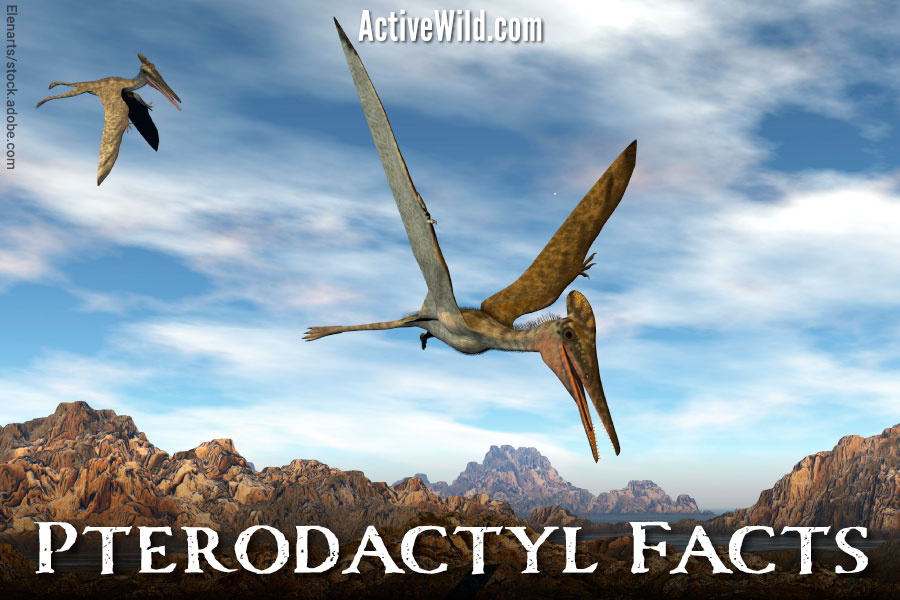 What Is A Pterodactyl?

A pterodactyl is either: any pterosaur; or more specifically, a member of the pterosaur genus Pterodactylus. Pterosaurs were flying reptiles that appeared in the late Jurassic Period and became extinct at the end of the Cretaceous Period. Pterodactylus was the first pterosaur to be discovered; as a result, the name pterodactyl has become synonymous with all pterosaurs.

Although the name pterodactyl strictly only applies to pterosaurs of genus Pterodactylus, on this page – unless stated – we will use the wider definition of the word pterodactyl (i.e., meaning all pterosaurs).

On this page you’ll find out what a pterodactyl was; when pterodactyls lived; what they looked like (including how they may have had hair-like feathers covering their bodies), what they ate, and how they evolved.

Pterodactyls were the first vertebrates to fly, but they weren’t the first flying animals; insects had been flying over one hundred million years before pterodactyls first appeared!

Pterodactyls flew on wings that were supported by a single finger bone. The word “pterodactyl” comes from the Greek for “winged finger”.

Pterodactyls are known as fish-eating animals that lived in coastal habitats, but in fact they were found in a number of different habitats and would have had a variety of diets.

Some pterodactyls lived in forests; others were able to swim. Just like modern birds, pterodactyls evolved to fit into many different niches.

There are around 204 valid pterodactyl genera (types).

Pterodactyl fossils vary considerably in size. Some pterodactyls were crow-sized (although these fossils may have been of juveniles); some were huge – the size of small airplanes!

The largest pterodactyls were the largest flying animals that have ever lived on Earth! 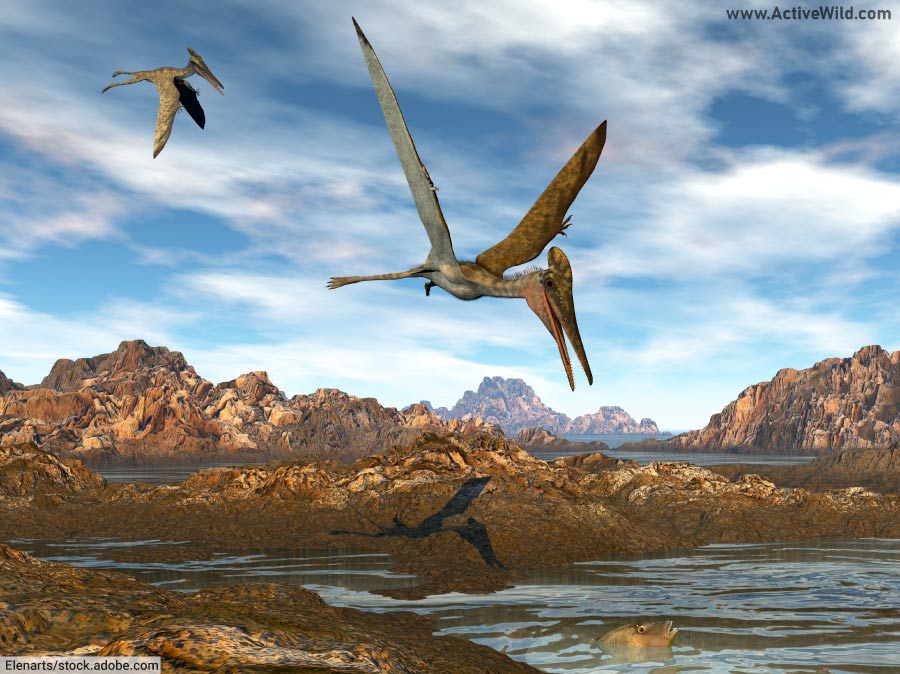 Just like a modern bird, a pterodactyl’s body had many adaptions for flight.

In order to fly, a pterodactyl had to be light, yet powerful enough to flap its wings. Like birds, pterodactyls had breastbones that extended outwards from the body, providing an anchor onto which the wing muscles could attach.

A pterodactyl’s wings consisted of skin and muscle. Each wing was attached to a specially extended fourth finger, and stretched to the hind limb.

A pterodactyl’s wing consisted of skin and muscle and was attached to an extended fourth finger.

Pterodactyls had large eyes, which suggests that they had good eyesight. Flying animals such as pterodactyls need good eyesight for judging distances, avoiding obstacles and finding food while in the air.

Pterodactyls also had relatively large brains for processing the large amount of information necessary for flight.

Pterodactyl bones were hollow and filled with air. The bone walls were extremely thin. This provided a combination of lightness and strength.

The crest had a bony base, but would have been extended by softer tissue such as cartilage.

Pterodactylus itself had a crest that extended from the snout in front of the eyes to the top of its head.

There were many different types of pterodactyls, and each would have had its own particular diet. The size and structure of a pterodactyl’s teeth reflects its diet.

Many later pterodactyls lacked teeth entirely. This was likely a weight-saving adaptation; like modern birds, they would have used their beaks to capture and manipulate food.

Pterodactyl Feathers: Were There Feathered Pterodactyls?

Pterodactyls are often depicted with scaly, bald skin. This may not be the case, as there is now evidence to suggest that a pterodactyl’s head and body were covered in hair-like “pycnofibers”.

Some paleontologists believe that the pycnofibers found on pterosaurs share their origins with the feathers found on dinosaurs (and later, birds). This suggests that the common ancestor of dinosaurs and pterosaurs already had feather-like structures before the two archosaur groups split.

(See the “pterodactyl evolution” section, further down the page.)

Pterodactylus was the first pterosaur to be discovered. As a result, the word “pterodactyl” is often used to refer to any pterosaur (as we’ve been doing on this page).

Pterodactylus itself was a genus (type) of pterosaur that lived in the Late Jurassic Period. With a wingspan of around 1 m / 3.28 ft., it was a relatively small pterosaur. The structure of its teeth suggest that it was a generalist carnivore whose diet consisted mainly of invertebrates.

Pterodactyl size varied considerably between genera. Fossils of small, starling-sized pterodactyls with wingspans of around 25 cm / 10 inches have been discovered, although these may have been juveniles rather than fully-grown adults. The largest pterodactyls were the size of small aircraft, with wingspans of up to 11 m / 36 feet. Standing almost as tall as a modern giraffe, they were the largest flying animals ever to have lived.

One of the smallest pterodactyls was Nemicolopterus, which had a wingspan of around 25 centimeters / 10 inches (although the only known specimen of this genus may have been a juvenile).

The largest pterodactyl was Quetzalcoatlus. This North American pterosaur lived in the Late Cretaceous Period. It had a wingspan of around 11 m / 36 ft., and, with its long neck extended, stood over 3 m / 9.8 ft. tall.

Pterodactyls first appeared in the late Jurassic Period. Little is known about the ancestors of pterodactyls; so far, the earliest-known pterodactyls were already capable of flight.

It is thought that pterodactyls evolved from gliding reptiles whose bodies, over time, became ever-more adapted for powered flight.

The ancestors of pterodactyls were likely similar to early gliding reptiles such as Sharovipteryx and Ozimek Volans.

A pterodactyl is an archosaur. Archosaurs are a group of reptiles (Archosauria) that first appeared early in the Triassic Period. There are still archosaurs living today; crocodilians (animals such as crocodiles and alligators) and birds are the two groups of living archosaurs.

During the Triassic Period, the archosaurs split into two main branches: Pseudosuchia (crocodile-like archosaurs) and Avemetatarsalia (dinosaurs and related animals, including today’s birds).

It’s thought that the ancestors of pterodactyls branched off from the Avemetatarsalia group, after the avemetatarsalians split from the pseudosuchians.

This means that pterodactyls are more closely related to dinosaurs than they are to crocodile-type archosaurs.

It’s likely that this “common ancestor” of both dinosaurs and pterosaurs was a small, long-legged reptile such as Scleromochlus or Lagerpeton.

You can discover more about prehistoric life on the following pages…