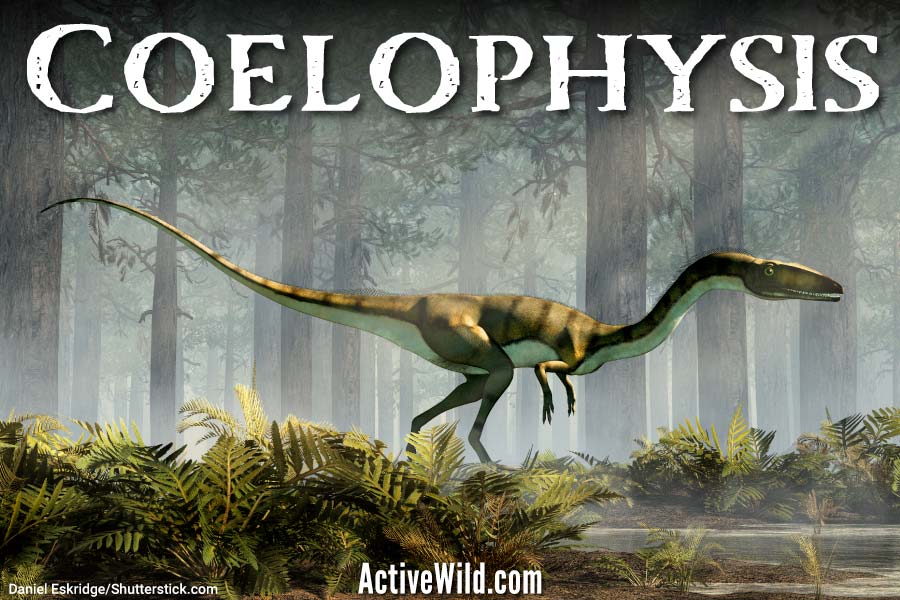 Coelophysis dinosaur facts and pictures. An in-depth guide to one of the world’s first dinosaurs…

Coelophysis was a small theropod dinosaur that lived in what is now North America and Southern Africa during the late Triassic. The genus appeared around 221.5 million years ago, making it one of the first-known dinosaurs. Reaching around 3 m / 9.8 ft in length, Coelophysis was a lightly-built, ground-dwelling dinosaur. Its diet probably consisted of insects and small vertebrates.

Coelophysis was discovered in the Late Triassic rocks of the Chinle Formation in northwestern New Mexico.

Like all theropods, Coelophysis was bipedal* and walked with its body held in a horizontal posture.

Each of Coelophysis’ feet had three main claws and a fourth, smaller claw positioned further up the foot. The arms were adapted for grasping and holding prey but are not thought to have been particularly powerful. The head was long and thin. The jaws of Coelophysis contained around 50 small, sharp teeth. 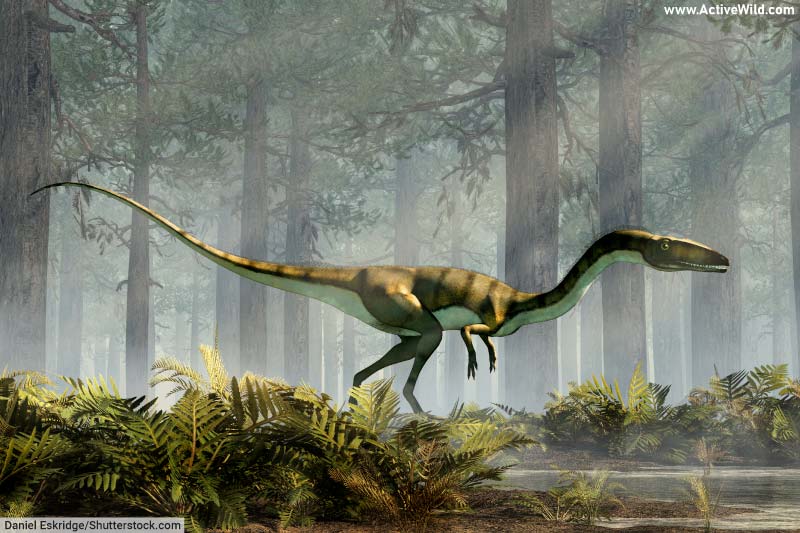 Coelophysis means “hollow form”. The name refers to the dinosaur’s hollow vertebrae. Hollow bones are a characteristic of theropod dinosaurs, including birds.

What Did Coelophysis Eat?

Coelophysis’ lightweight build suggests that it was a fast, nimble predator.

By comparing Coelophysis’ sclerotic ring (a part of the eye) a with that of living reptiles and birds, paleontologists have found that Coelophysis probably hunted by sight, and was active during the day. (Source)

Was Coelophysis A Cannibal?

The remains of what were thought to be juvenile Coelophysis were found in the body cavities of two adult Coelophysis specimens. This discovery led to the dinosaur being labelled a cannibal.

Subsequent re-examination of the specimens revealed that the remains were of early crocodylomorphs, rather than juvenile Coelophysis. (Source)

Coelophysis lived from 220 to 183 million years ago, during the Late Cretaceous period.

What Dinosaurs Did Coelophysis Live With?

Coelophysis was one of the first dinosaurs. It lived in a world dominated not by other dinosaurs, but by non-dinosaur archosaurs and the reptile-like ancestors of mammals.

Relatively small, and slenderly-built, Coelophysis was not an apex predator. The speed and agility of Coelophysis may have been adaptions not only for capturing prey, but also for evading larger predators.

Coelophysis had to evade meat-eaters such as the crocodile-like Phytosaurs and the fearsome rauisuchid Postosuchus.

Another reptile that lived alongside Coelophysis was the archosaur Effigia. This genus was discovered by then-PhD student Sterling Nesbitt, who realized that a specimen previously identified as Coelophysis was in fact a different type of reptile altogether.

Also living with Coelophysis were the large, herbivorous dicynodont Placerias, and the dog-sized carnivorous cynodont Thrinaxodon.

The first Coelophysis specimens were discovered in 1881 in Chinle formation rocks in northwestern New Mexico.

The Chinle formation is a layer of rock formed in the Late Triassic that spreads across parts of Nevada, Utah, Arizona, New Mexico, and Colorado.

The fossils were discovered by fossil collector David Baldwin, who at the time was working for famed paleontologist Edward Drinker Cope.

After incorrectly attributing them to existing genera, Cope realized that the specimens belonged to a new genus, which he named Coelophysis (“hollow form”) for the hollow appearance of the vertebrae.

In 1947, paleontologist Edwin Colbert led a fossil-finding expedition to Ghost Ranch, a large ranch in northwestern New Mexico, close to where the original Coelophysis fossils had been found.

Here he discovered the fossilized remains of hundreds of Coelophysis in a single “graveyard”. This large “flock” of dinosaurs had likely been caught in a flash flood and become buried in sediment. The group contains juveniles and adults of both sexes, giving us a snapshot of how Coelophysis lived.

Due to the large number of Coelophysis fossils found, the genus is one of the best-known dinosaurs.

A smaller “Coelophysis graveyard” was discovered in Zimbabwe.

What Type Of Dinosaur Was Coelophysis?

Coelophysis is one of the earliest-known theropod dinosaurs. It belongs to the family Coelophysidae, which also includes genera such as Camposaurus, Procompsognathus and Segisaurus.

Coelophysis was the second dinosaur to be taken to space (the first was Maiasaura). A Coelophysis skull was transported to the space station Mir as part of a mission carried out by the Space Shuttle Endeavour in 1998.