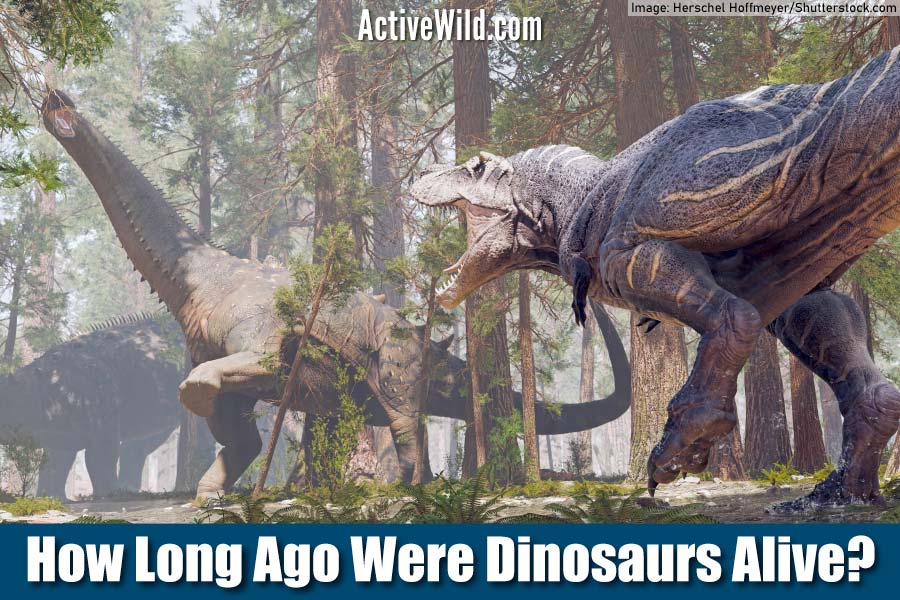 How Long Ago Were Dinosaurs Alive?

Dinosaurs were alive from the appearance of the very first dinosaurs around 245 million years ago, to their extinction 66 million years ago: a period of 179 million years. Dinosaurs have been extinct for over 200 times longer than the total time humans have lived.

Today, scientists consider birds to be dinosaurs. This means that dinosaurs are still alive, and did not become extinct 66 million years ago.

On this page, when we talk about dinosaurs, we mean “non-avian dinosaurs”, in other words, the dinosaurs that hadn’t evolved into birds.

How Successful Were Dinosaurs?

Dinosaurs are a highly successful group of animals; they have lived from around 245 million years ago to the present day.

Because (non-avian) dinosaurs went extinct 66 million years ago, many people assume that dinosaurs were evolutionary failures.

That assumption would be wrong; even the non-avian dinosaurs ruled the land for around 179 million years, and during that time they evolved to fill many different niches, from apex predators such as T. Rex, to herbivores such as Parasaurolophus.

If Earth hadn’t been struck by a huge asteroid around 66 million years ago, dinosaurs might still be alive, and humans might never have evolved!

Of course, dinosaurs are still alive (as birds), meaning that they’ve been around longer than mammals.

The Mesozoic Era: Age Of Reptiles

Dinosaurs lived during the Mesozoic Era, which is part of the geologic timescale – the means by which geologists measure Earth’s history.

(The geologic timescale is based on the layers of rock that were formed at certain times in Earth’s history. You can find out more about it on this page: Geologic Timescale Facts)

During the Mesozoic Era, reptiles (not just dinosaurs) were the dominant vertebrate animals on land, in the air, and in the sea. For this reason, the Mesozoic Era is also known as the “Age of Reptiles”.

The Mesozoic Era is divided into three periods: the Triassic Period, Jurassic Period and Cretaceous Period. You can see how long each of these periods lasted in the table below:

What Happened On Earth While Dinosaurs Were Alive?

During the vast amount of time that dinosaurs were alive, Earth underwent a number of major changes.

When dinosaurs first appeared, the planet was dominated by a single supercontinent called Pangaea.

Although both land and sea were full of animal life, the world was a very different place then than it is today; no birds sang, no mammals lived, no grass grew, and no flowers blossomed; these organisms were yet to evolve.

Fast-forward around 185 million years, to just before dinosaurs went extinct, and Earth would have looked somewhat more familiar to our eyes. By then, Pangaea had broken up into the continents that we know today, birds had evolved, small mammals were scurrying around, grass was growing and flowers were being pollinated by bees.

However, with dinosaurs roaming the land, pterosaurs soaring overhead, and mosasaurs and plesiosaurs patrolling the oceans, Earth would still have a long way to go before a human onlooker would recognize it as home!

Earth has experienced five major extinction events, the best-known being the Cretaceous-Paleogene Extinction Event (also called the ‘K/T extinction event’), that caused the extinction of the dinosaurs (and many other animals and plants), 66 million years ago.

Believe it or not, the Cretaceous-Paleogene Extinction Event was not the most severe mass extinction that Earth has ever suffered.

That title goes to the Permian-Triassic Extinction Event, which, due to its severity, is also known as the “Great Dying”. During this turbulent time, an estimated 90% of all life on Earth was wiped out.

At the beginning of the Triassic Period – long before dinosaurs appeared – Earth was recovering from the Permian-Triassic Extinction Event.

With most land animals having recently become extinct, the surviving animal groups competed to achieve dominance in those recently-vacated niches.

The two main groups of terrestrial (land-living) vertebrates were therapsids and archosaurs.

During the Triassic Period, dinosaurs were not the dominant land predators. That title belonged to the pseudosuchians.

Large, meat-eating pseudosuchians, such as the 13ft. / 4 m long Postosuchus were the apex predators of the Late Triassic Period.

Triassic–Jurassic Extinction Event And The Rise Of The Dinosaurs

Around 50 million years after the Permian-Triassic Extinction Event, Earth was rocked by another mass extinction.

The Triassic–Jurassic extinction event resulted in the extinction of most of the pseudosuchians.

With their main competitors out of the way, dinosaurs were able to become the dominant land animals in the Jurassic Period.

What of the pseudosuchians? Some survived, but the group would never again reach the heights that they attained during the Triassic Period.

Today, the only living pseudosuchians are the crocodilians: animals such as crocodiles, alligators and caimans.

The likely cause of the Triassic-Jurassic Extinction Event is continuous volcanic activity in an area now known as the Central Atlantic magmatic province (CAMP).

Whatever the cause, the Jurassic land was ready for a new dominant animal group: the dinosaurs!

The dinosaurs went on to become the dominant land animals throughout the Jurassic and Cretaceous Periods.

The long reign of the dinosaurs was brought to a close with the Cretaceous-Paleocene Extinction Event. However, the dinosaurs would live on in the shape of birds – a group of animals that still thrives, on every continent on Earth, to this day!