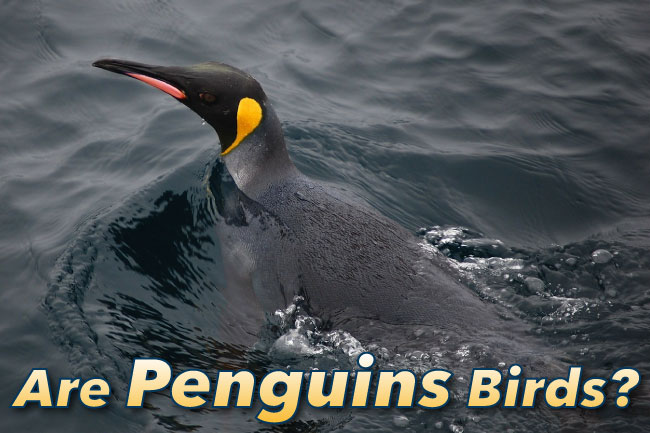 Are penguins birds is a question that a surprising number of people ask the internet every day. Of course, regular visitors to Active Wild will already know the answer – we’ve talked about penguins here: Penguin Facts, and here: Antarctic Penguins.

For everyone else, we’ll provide the answer to the question are penguins birds on this page, and we’ll also provide lots of other penguin information …

Are Penguins Birds? The Answer

Are penguins birds? Yes, of course penguins are birds! Although they don’t fly, and look a little different to other birds, penguins exhibit all of the characteristics required to make them a bird!

But What Is A Bird?

To answer this question, we’ll start by looking at how living things are classified…

Scientists classify all living things into different groups. This makes studying living things easier, and also helps us to understand how species evolve. The largest groups are called ‘kingdoms’. There are at least five kingdoms; some scientific systems use six kingdoms.

Here is a list of the kingdoms of living things:

In America, the system is slightly different, and Monera are split into two groups: Archaea and Bacteria, making six kingdoms!

Every living thing can be placed into one of the kingdoms.

Penguins are in the Animal Kingdom. You can find out why on this page: Is a Bird an Animal?

Also in the animal kingdom are many other species, such as elephants, snakes and bumblebees. Clearly all of these animals have very different characteristics. This is why each group is further divided into smaller groups, all the way down until we arrive at the individual species.

Each classification level (or rank) has a different name.

The rank after Kingdom is Phylum.

An example of a phylum is Chordata. Penguins are members of this Phylum, as are elephants and snakes.

However bumblebees do not possess the characteristics of this phylum, and are instead placed in the Arthropoda phylum. (Arthropods don’t have backbones, and have ‘exoskeletons’, which are external skeletons.)

The next rank down from phylum is class.

Elephants are placed in the Mammalia (mammal) class. Snakes find themselves in the Reptilia (reptile) class, while penguins are in the Aves (bird) class.

The Aves Class: Why Is A Penguin A Bird?

Characteristics of animals in the aves class – birds, in other words – include having feathers and beaks, lightweight skeletons and laying eggs with hard shells.

Although penguins are flightless birds – i.e. they can’t fly – they still possess all of the characteristics necessary to categorise them as birds.

Whereas most birds have wings, the penguin’s wings have evolved into flippers. Penguins use their flippers to ‘fly’ through the water in pursuit of fish and other creatures.

The classification system doesn’t stop at classes. Members of each class are further divided into other ranks: order, family, genus and – finally – species.

(There are other ranks in between, but these are the main ones.)

Penguins are in the Sphenisciformes order, and the Spheniscidae family. This family includes several extinct species of penguin.

Are Penguins Birds: Types Of Penguin

All of the penguins alive today are in the subfamily Spheniscinae, which is also known as the ‘modern penguin’ subfamily.

Modern penguins are divided into six genera (genera is the plural of genus).

How many penguin species are there? Well, that’s a good question! There are between 18 and 20 species of penguin, depending on which scientist you believe. Scientists’ opinions differ on whether some of the species listed below are actually separate species in their own right, or just subspecies of existing species.

Below you can find a current list of penguin genera and species:

In this article we’ve found that penguins are birds. They have all of the defining characteristics of the Aves class.

Any animal that has feathers, a beak, a lightweight skeleton and that lays eggs is a bird. This means that animals as different as ostriches, hummingbirds and penguins are all birds.

In this article we’ve also found out about how animals are classified, and learned some of the ranks that biologists use to classify members of the animal kingdom.

In the future, if anyone asks you are penguins birds?, you’ll know the answer!

You can find out more about penguins here: Penguin Facts

Got more questions? Try this: Is a Bird an Animal?

Or this… Is a Frog a Reptile?