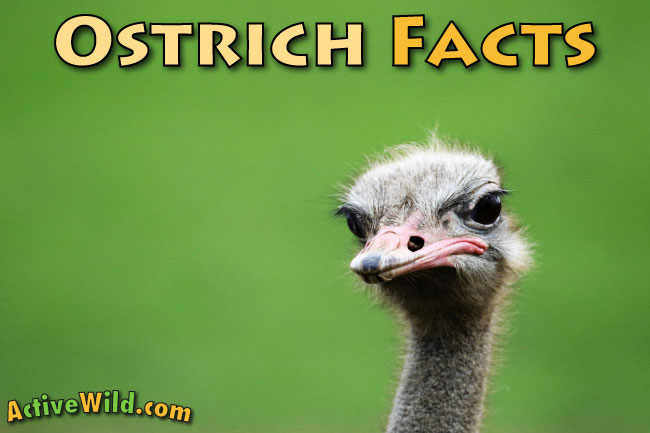 This page contains common ostrich facts for kids and students. This animal is part of the Active Wild Online Zoo, a virtual zoo that features animal information, pictures and videos. Visit today!

Common Ostrich Facts At A Glance

The ostrich is the fastest bird in the world … on land. Watch how fast it can run in the video below:

The common ostrich is a large, flightless bird that lives in Africa. It is a record breaker in many ways; not only is it the biggest, tallest and heaviest bird, it’s also the fastest bird on land, the fastest two-legged animal, and it lays the largest eggs of any animal.

The common ostrich is a member of a group of (mainly) large, flightless birds called ratites. The other ratites that are alive today are rheas, cassowaries, emus and kiwis (kiwis are much smaller than the other ratites).

(Subspecies are members of the same species, but usually have slight physical differences and are found in different areas.)

How To Recognize A Common Ostrich

The ostrich is easily recognizable by its large size, long legs, long neck and small head. The common and Somali ostriches are the only large flightless birds found in Africa.

Ostrich feathers lack the tiny hooks that hold the feathers of other birds together. Because of this an ostrich’s feathers are fluffy and loose.

The ostrich’s neck is covered in small, downy feathers, and its legs are largely bare. The skin varies in color from pale grey to reddish-pink. The lower leg is covered in scales – a reminder of the bird’s dinosaur ancestry.

An ostrich’s legs are extremely strong, enabling the animal to run at high speeds (we’ll find out just how fast further down the page) and also to deliver a powerful defensive kick.

Ostriches have two toes, unlike most other birds, which have four. This may be an adaptation to allow it to run faster. The inner toe has a large, hoof-like claw.

The ostrich has long eyelashes to protect its huge eyes, which are larger than those of any other bird. In fact each of the ostrich’s eyeballs is bigger than its brain!

Watch the video below to see Common Ostriches in the wild:

Where Does The Common Ostrich Live?

The ostrich has a large range (the area in which it is found) and is present in over 25 countries throughout western, eastern and southern Africa.

The ostrich’s range is split by the forested regions of central Africa. Northern African countries in which it is found include Mauritania, Mali, Niger, Chad, Sudan, and Ethiopia.

In southern Africa it is found include Angola, Namibia, South Africa, Botswana, Zambia, Zimbabwe and Mozambique.

The common ostrich is farmed in Africa, and has also been introduced to Australia for this purpose. In Australia, escapees have formed feral (domestic animals turned wild) populations.

The ostrich lives in semi-arid (dry, with little rainfall) habitats, including plains, deserts and savannas.

The ostrich is an omnivore, which means that it eats both plants and meat. It mainly eats seeds, grass, shrubs and flowers. It will also eat insects such as locusts, and even small creatures such as lizards and snakes.

Ostriches, like all modern birds, don’t have teeth. Because of this, the ostrich swallows pebbles and sand to aid the digestive process. This material collects in a stomach area called the gizzard, where it helps to grind down the food.

Ostriches are diurnal (active during the day). During the winter months ostriches are either solitary or live in pairs. During the breeding season, however, they group together in flocks that range in size from 5 to 100 or more birds.

The flocks are established by a dominant male, who defends his territory from other males.

Ostriches have extremely good vision, and being so tall, are able to see predators from far away. This ability is multiplied when the birds are in a flock, because there are so many eyes watching out for potential danger. Ostriches also have acute hearing.

An ostrich will flee if it senses danger, its high speed being its primary means of defense. However, if cornered, an ostrich is able to deliver a powerful kick. This can cause injury or even death.

Ostrich flocks are known to mingle with grazing animals such as zebras and antelopes.

How Fast Can An Ostrich Run?

The ostrich makes up for not being able to fly by being the world’s fastest-running bird. In fact, the speedy giant would be in danger of getting a speeding ticket in many countries! It is able to reach speeds of up to 43 miles per hour (70 km/h) in short bursts.

Why Do Ostriches Have Wings?

Although ostriches have lost the power of flight, their wings still have plenty of uses. An ostrich’s wings provide stability and help the bird to maneuver while it is running. The male ostrich uses its wings to impress a female during its courtship display. Adult ostriches also use their wings to shelter their chicks from the African sun and the cold desert nights.

Do Ostriches Bury Their Heads In The Sand?

If someone is said to be ‘burying his head in the sand’, it means that he is deliberately ignoring approaching danger.

The expression stems from the common belief that ostriches bury their heads in response to a threat.

However, ostriches don’t actually do this!

The expression may have arisen because an ostrich, if threatened, may lie close to the ground in a defensive posture – but it won’t attempt to bury its head!

During the breeding season, ostriches form groups comprising a dominant male, a female known as a ‘major’ hen, and several other ‘minor’ females. The male protects his territory from other males.

The mating process begins with the male ostrich performing a courtship dance to a female. He lowers himself to the ground and sways to and fro with wings extended, throwing his head back as he does so. If the female is interested, she will sit on the ground and mating will commence.

The major hen lays 7 to 11 eggs in a nest – basically a large hole scraped into the ground – constructed by the male. The other females each lay 2 to 6 eggs in the same nest.

The dominant male and the major hen take turns to incubate all of the eggs in the nest. The brown-colored female incubates the eggs during the day, when she is better camouflaged. The male takes over during the night.

The eggs hatch after 35 to 46 days. Ostrich chicks are pale brown, and have black lines and spots on their necks and faces. After a few days the chicks leave the nest and begin to follow their parents around.

The parents shelter the chicks from both the sun and cold with their wings. If threatened, the male will divert the attacker’s attention while the chicks can scatter.

Ostrich chicks grow around 25 cm (9.8 in.) per month. They are almost adult-sized within 6 months.

The ostrich is a long-lived bird, with a lifespan of over 60 years in captivity.

The ostrich has a long association with man. For thousands of years the bird’s feathers have been worn and traded, and the bird itself hunted for bush meat. In the 18th century ostriches were almost hunted to extinction for their feathers.

Today, ostriches are farmed for their meat and feathers, and their skin is used to make leather. In Africa, the birds are ridden and raced in organized gatherings; a tradition that has also spread to parts of America.

Is The Common Ostrich Endangered?

The common ostrich is found across a very wide range. However, due to increased human incursion, its population is decreasing. Despite this, the bird is currently rated ‘Least Concern’.

The closely related Somali ostrich was rated ‘Vulnerable’ in 2016