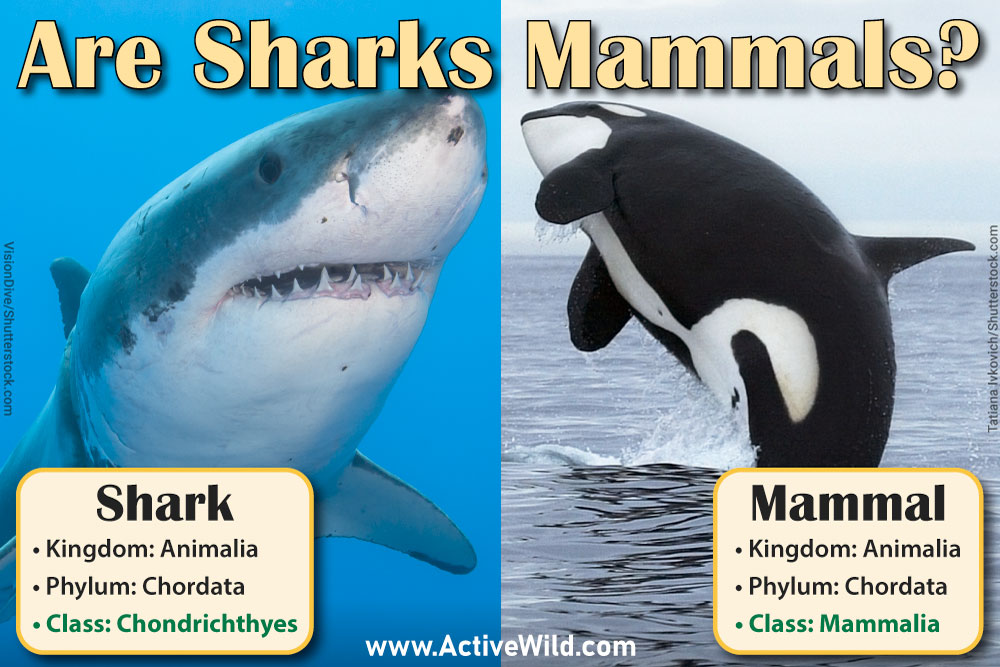 Although sharks do share some physical characteristics with mammals (especially marine mammals such as whales and dolphins), they are very different types of animal.

On this page you’ll discover why sharks are fish rather than mammals, and learn some amazing facts about both groups of animals along the way…

Is A Shark A Mammal?

Differences Between Sharks and Fish

A class is a group of related animals; one of several different groups that biologists use to classify living things.

Sharks belong to the class Chondrichthyes, which is one of three classes of living fish (see below)

Mammals belong to the class Mammalia. There are around 6,025 mammal species. (Source)

The Three Classes Of Living Fish

There are other classes of fish, but they contain only extinct species.

You can find out more about fish on this page: Fish – The Ultimate Guide

The class Chondrichthyes itself is divided into two subclasses: Elasmobranchii, which contains all sharks, rays, skates and sawfish; and Holocephali, which contains fish known as chimaeras, which are mainly deep-sea species.

There are around 530 different species of sharks. Sharks are far outnumbered by the bony fish of class Osteichthyes, of which there are around 28,000 species!

You can find out more about the different types of sharks on this page: Types of Sharks with Pictures and Facts

You can find out more about the different types of fish on this page: Types of Fish with Pictures & Facts

Mammals are a large group of diverse animals, all of which have certain characteristics in common.

One of the defining characteristics of mammals is that female mammals produce milk for feeding their young.

The word ‘mammal’ comes from the scientific word for the mammary gland – the part of a female mammal’s body that produces milk.

You can see examples of mammals on this page: Mammals List with Pictures and Facts

Other characteristics that all mammals share include being warm-blooded and having hair (or fur).

Being warm blooded means that an animal is able to regulate its own body temperature (by shivering, etc.) in order to maintain a constant temperature.

The scientific term for being warm-blooded is endothermic.

Most sharks are cold-blooded. A typical shark’s body lacks the means to control its own temperature, and is reliant on external conditions.

The scientific term for being cold-blooded is ectothermic.

Some sharks in the family Lamnidae (e.g., the great white shark and the two species of mako shark) are warm-blooded, and are able to keep the temperature of their bodies at a different level to that of their surroundings.

Despite being warm-blooded, these sharks are not mammals. The process by which they control the temperature of their bodies is different to that found in mammals.

The reason that so many people ask the question “Are sharks mammals?” is that large sharks such as the great white shark resemble aquatic mammals such as whales and dolphins.

The fact that whales – some of which look like sharks – are mammals confuses people into thinking that sharks may be mammals too.

Both sharks and mammals are vertebrates (i.e. they have backbones) and share a common ancestor that lived hundreds of millions of years ago.

Both sharks and whales have smooth, torpedo-shaped bodies for travelling through the water with maximum efficiency. Both propel themselves with paddle-shaped limbs.

In addition, sharks and whales are also (often) the same color!

However, despite those similarities, sharks and cetaceans (aquatic mammals such as whales, dolphins and porpoises) are only very distantly related.

The similarity in body shape (and other characteristics) in sharks and whales is a result of convergent evolution: the development of similar characteristics in unrelated animals.

Another example of convergent evolution are ichthyosaurs; these marine reptiles of the Mesozoic Era resemble the sharks and dolphins of today.

Differences Between Sharks And Whales

Whereas sharks appeared long before the dinosaurs, the first whales and dolphins only appeared millions of years after the dinosaur extinction at the end of the Cretaceous Period.

The ancestors of mammals (and all other land animals) evolved from fish hundreds of millions of years ago.

You can see a list of whale species on this page: Top Ten Biggest Whales, With Pictures & Facts

Although whales appear to be hairless, they do have hair follicles (the organs from which hair grows), which are often located on the face, around the mouth. The young of some whale species have hair before being born.

Sharks don’t have hair. Their bodies are covered with tough scales that enable them to swim quietly and efficiently.

Is A Shark A Mammal? Live Young

As we’ve found, one characteristic of mammals is giving birth to live young (rather than laying eggs). Only five mammal species reproduce by laying eggs.

The five mammals that lay eggs are the platypus, and the four species of echidna (spiny anteaters). These five species are known as monotremes.

Like mammals – and unlike many other fish – many sharks give birth to live young. So in this respect sharks are similar to mammals.

However, there are differences in how the unborn sharks receive nourishment while they are growing inside the mother (often the young sharks grow in eggs that hatch inside the mother’s body, a process known as Ovoviviparity).

You can find out more about the fascinating life cycle of a shark on these pages:

Mammals breathe using lungs, whereas most fish (including sharks) breathe with gills. Gills are organs that extract oxygen from water.

A shark can spend its whole life underwater; an aquatic mammal such as a whale has to come up to the surface to breathe at regular intervals.

As we’ve found, although sharks are vertebrates, and most give birth to live young – they lack many other mammalian characteristics.

Sharks don’t feed their young with milk, neither do they have hair or lungs. In addition, the vast majority of sharks are cold-blooded, whereas mammals are warm blooded.

Why Sharks Are Fish

Fish are vertebrates (animals with a backbone) that have gills (although some fish can breathe using other methods) and fins. These characteristics are found in all sharks.

What type of fish is a shark?

Jawless fish include hagfish and lampreys. They are eel-like fish, with long, thin bodies.

All sharks have jaws, therefore sharks are not members of this group.

95% of fish species are bony fish. Bony fish have skeletons made of bone. Most bony fish have a swim bladder, which is a gas-filled organ that controls the fish’s buoyancy.

A shark doesn’t have a swim bladder, and has to swim to reach the required depth. Therefore, sharks aren’t bony fish.

Chondrichthyes are fish whose skeleton is made of cartilage, rather than bone. (Cartilage is like bone, but more flexible.)

The skeletons of sharks are made of cartilage, therefore sharks belong to the class Chondrichthyes, and are cartilaginous fish.

The scientist responsible for much of the way we think about animal classification is Swedish naturalist Carl Linnaeus (1707–1778). The Linnean Society is the world’s oldest biological society, and is named after him. (Website)

Are Sharks Mammals or Fish? Conclusion

Are sharks mammals or fish? On this page we’ve found that sharks are not mammals due to a number of reasons:

In addition, because sharks don’t have swim bladders and their skeletons are made of cartilage rather than bone, sharks are cartilaginous fish, of class Chondrichthyes.

Is A Bird A Mammal?

Is A Dolphin A Mammal?

Is A Frog A Reptile?

3 thoughts on “Are Sharks Mammals? Is A Shark A Mammal Or A Fish?”