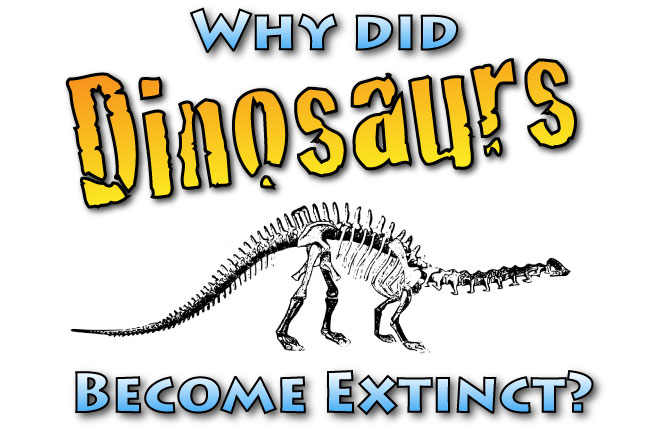 How and why did dinosaurs become extinct? Around 66 million years ago, something happened that caused 75% of all living species – including the dinosaurs – to become extinct.

• This article is part of our Dinosaur Facts series.

How and Why Did Dinosaurs Become Extinct?

Before we look at the various theories put forward to explain the extinction of the dinosaurs, we need to point out that in this article, when we talk about ‘dinosaurs’, we mean ‘non-avian dinosaurs’.

If you’ve been following our Dinosaur Facts Series, then you’ll know that many scientists today consider birds to be dinosaurs. This is because all living birds are descended from a branch of dinosaurs called theropods.

Birds form the ‘Aves’ class of animals (a ‘class’ is a big group of related species). The word used to describe members of the Aves class is ‘avian’. Therefore, non-avian dinosaurs are those that hadn’t evolved into birds.

As we found in this article, dinosaurs were alive for a lot longer than they’ve been extinct. They are among the most successful groups of animals ever to have evolved on Earth.

Just what would it have taken to kill them off?

The extinction of the dinosaurs was not the first time the world has experienced a mass extinction. In fact, since the Cambrian Explosion (the period around 543 million years ago during which many complex lifeforms started to appear) there have been FIVE major extinctions.

These periods of widespread and rapid extinction are known as ‘extinction events’.

Did you know that dinosaurs actually survived one extinction event?

The Triassic–Jurassic extinction event, which occurred around 201.3 million years ago, wiped out between 70 and 75% of all species. But not the dinosaurs.

In fact, this was one mass extinction that benefitted the dinosaurs, because it wiped out many of their early mammal and reptile competitors!

However, when Earth was hit by the Cretaceous–Paleogene extinction event 134 million years later, the dinosaurs weren’t so lucky. Only those clever enough to have evolved into birds survived!

This mass extinction, which happened around 66 million years ago, is also known as the ‘K-Pg’ or ‘K-T’ extinction event. As we’ve already seen, it caused the extinction of 75% of all species on Earth, including all of the (non-avian) dinosaurs.

It also marked not only the end of the Cretaceous period, but also of the whole Mesozoic Era.

(You can find out about the Triassic, Jurassic and Cretaceous periods, and the Mesozoic era, here: Dinosaur Periods.)

How did Dinosaurs Become Extinct?

Since we first found that dinosaurs had once been the dominant land animals on Earth, the next logical question was ‘what happened to them?’

Many theories have been put forward to explain the extinction of the dinosaurs. These range from the bizarre (were the dinosaurs kidnapped by aliens?) to rather more credible explanations including climate change, and poisonous volcanic gases.

Not Just The Dinos!

Let’s not forget that many other species became extinct at the end of the Cretaceous period. Whatever it was that killed off the dinosaurs also finished off the Pterosaurs, Plesiosaurs, and many kinds of fish, mollusks and plants.

Oh, and not all of the mammals made it through, either.

One of our favorite dinosaur extinction theories involves another star, called Nemesis. According to the theory, Nemesis – which hasn’t actually been discovered yet – is part of a binary star system with the Sun. Every 26 million years or so, their connected orbits bring the two stars closer together, causing asteroids and comets to come crashing into Earth.

In case you are worriedly looking at the stars with a telescope, NASA rejected the Nemesis theory in 2011.

The Deccan Traps were formed by volcanic eruptions around 66 million years ago. The eruptions may even have lasted for tens of thousands of years. The smoke, ash and gases cast up from the volcanoes would have darkened the skies and poisoned animals and plants. Temperatures would have dropped, plants would have been unable to grow, and food would have become scarce.

In 1980, the father and son scientists Luis and Walter Alvarez put forward a theory suggesting that the Cretaceous–Paleogene mass extinction was caused by an asteroid hitting Earth.

They calculated that an impact from an asteroid around 10 km (6 miles) in diameter would have caused an explosion millions of times bigger than that caused by a nuclear bomb.

The effect of such a blast would be wide-ranging and catastrophic. Anything in the vicinity of the blast would have been instantly vaporized. The huge dust cloud thrown up by the explosion would have darkened the skies and blocked out the sun.

Temperatures would have dropped, and plants would have been unable to grow in the darkness. This would have affected the entire food chain, from the smallest plants upwards. Any animal unable to adapt would have perished.

The Alvarez team came up with the asteroid impact theory after studying a narrow band of sediment that is found between rocks formed during the Cretaceous and Paleogene periods.

This band of rock is known as the Cretaceous–Paleogene boundary. The Alvarez team found that it contained an unusually high amount of iridium, a type of metal that is usually only found either in the Earth’s core … or in asteroids.

The Alvarez Hypothesis suggests that the Cretaceous–Paleogene boundary was formed by debris thrown up by an asteroid strike, and that such a strike would have caused the extinction of the dinosaurs.

The main reason why the Alvarez Hypothesis wasn’t immediately taken up by other scientists was that an asteroid impact of that magnitude would have left a huge crater. At the time, there was no evidence of such a crater.

However, in the years that followed a huge buried crater located in the Yucatán Peninsula in Mexico became recognized as proof of the Alvarez Hypothesis.

The Chicxulub crater, named after a nearby town, was discovered by the geophysicists Antonio Camargo and Glen Penfield. Studies have found that it was formed 66 million years ago, and scientists now believe that it is evidence that Earth was struck by an extra-terrestrial object large enough to have caused the extinction of the dinosaurs.

The Alvarez Hypothesis continues to be the most likely explanation as to why dinosaurs became extinct.

So Why Did Only Dinosaurs Become Extinct?

Many theories have been put forward to explain why the dinosaurs became extinct while other types of animal survived.

Of course – as we’ve seen – it wasn’t only the dinosaurs that went extinct. Many other types of animal also died out.

Whether an animal survived or not in the years that followed the asteroid strike may simply have been down to its size. Larger species need more to eat, and are therefore more susceptible to food shortages.

Smaller animals are also better able to seek shelter, either by burrowing or by hiding under rocks or plants. Large animals would find themselves much more exposed to adverse environmental conditions.

Dinosaurs may have been further disadvantaged by the large difference in size between young and adults. Infant dinosaurs have to be small to fit in an egg, even if they’ll eventually grow to be a huge sauropod such as a Brachiosaurus. They have to do a lot of growing before they’re able to out-compete all of the other animals around them.

Mammalian young, on the other hand, are able to feed on their mothers’ milk immediately after being born. They also don’t have to hatch from an egg, and are therefore closer to their adult size at birth.

Late Cretaceous mammals would have been able to out-compete dinosaurs as infants, and would therefore have been much more likely to reach adulthood.

A Tale of Two Species

Most scientists agree that the species that survived the extinction event were less specialized in their dietary and habitat requirements than those that perished.

As an illustration, suppose that there are two species living shortly before the asteroid strike. One species is big and fierce, the other small and timid.

The bigger species could stop the other species from eating a particularly nutritious plant.

Because of this, the bigger species adapted so that it was only able to eat this plant. After all, there was no point in being able to eat lesser plants – it had control of the best food around.

The other, smaller, animal would have dearly liked to be able to eat the best plant, but instead was reduced to scrabbling around for whatever else it could find. Because of this, it evolved the ability to eat many kinds of plants.

Then the asteroid hit.

In the cold, dark years after the impact, the best plant was unable to grow properly. Its leaves were no longer as big or as nutritious as they used to be. Eventually, only a few, withered bushes remained.

The big, fierce species would find itself with nothing to eat. The withered bushes could no longer support its great size. Because its adaptations only allowed it to eat the best plant, it wasn’t able to eat any other food. All of a sudden its size and ferocity counted for nothing, and it would starve.

The smaller species, on the other hand, would thrive. Happy to eat the withered bushes, as well as to forage for whatever else it could find, it would be healthier and more likely to survive than ever.

How and Why did Dinosaurs Become Extinct? Conclusion

While we still can’t be absolutely sure about what happened at the end of the Cretaceous period, thanks to the work of scientists such as the Alvarezes, our understanding is becoming ever clearer.

Unless the shadowy Nemesis star once again emerges from the depths of space, or aliens return with a spaceship full of dinosaurs, then the Alvarez asteroid hypothesis is currently the best way of explaining why dinosaurs became extinct.

• For a complete guide to dinosaurs, and all of our dinosaur pages, visit: Dinosaur Facts