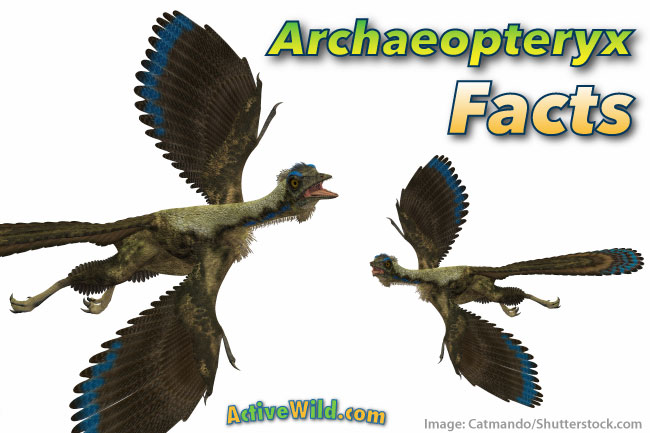 Archaeopteryx is famous for being the ‘first bird’. In fact, another name for Archaeopteryx is ‘Urvogel’, which is German for ‘first bird’. However, despite having feathers and wings, this late Cretaceous animal still retains very un-birdlike characteristics, such as teeth and a bony tail. It is a true ‘transitional’ animal. This article contains Archaeopteryx facts and information, and is part of our Dinosaur Facts series.

The discovery of Archaeopteryx in the early 1860’s was one of the most important fossil finds of all time. Not only did it provide a link between dinosaurs and birds, but it also supported the evolutionary theories put forward in Darwin’s book, ‘On the Evolution of Species’, which had been published only a few years previously.

We’ll learn more about the link between Archaeopteryx and modern-day birds further down the page.

Archaeopteryx flight feathers were asymmetrical. This suggests that they were designed for flight, rather than warmth. Archaeopteryx also had a wishbone – a bone that provides strength to the chest while flying – just like birds of today.

Archaeopteryx’s first toes were reversed – as are those of modern birds. This may have allowed Archaeopteryx to grab onto and perch on branches. 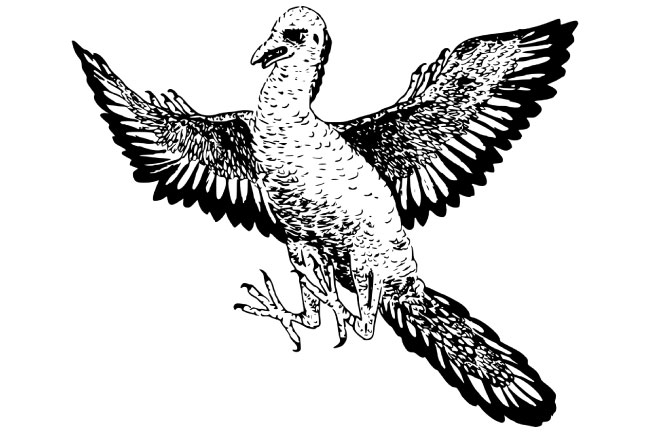 However, Archaeopteryx was very much still a dinosaur. There were three claws halfway down the front of each wing. Its beak contained rows of sharp teeth. Its tail was long and bony, whereas modern birds have muscular stumps with tail feathers rather than an actual tail.

The second claw on each of Archaeopteryx’s feet was a hyperextensible (capable of extra movement) ‘killing claw’.

How Big Was Archaeopteryx?

Many illustrations of Archaeopteryx portray it as being bigger than it actually was. In real life, it would only have been about the size of a raven. Its body grew to around 51 cm (20”) in length, and it weighed between 0.8 and 1 kg (1.8 and 2.2 lb.).

When Did Archaeopteryx Live?

Archaeopteryx lived in the early Tithonian age of the Late Jurassic epoch, around 150.8–148.5 million years ago.

Where Did Arc Live?

Archaeopteryx lived in what is now southern Germany. In the late Jurassic period, the area would have been an archipelago (island group) near the Equator, with a warm climate similar to that of Florida today.

All Archaeopteryx fossils have been found in Bavaria’s Solnhofen limestone deposits – an area famed for its extremely well-preserved fossils.

What Did Arc Eat?

Archaeopteryx probably preyed on small animals such as insects, worms, lizards and mammals.

The first Archaeopteryx fossil to be found was a single feather. It was discovered in either 1860 or 1861 by German paleontologist Christian Erich Hermann von Meyer.

Although Archaeopteryx was named from this fossil, there is some dispute today over whether or not it actually is from an Archaeopteryx!

Over the years, 12 more Archaeopteryx specimens have been found. These are all largely complete body fossils, and feathers can clearly be seen on most of them.

What Does Archaeopteryx Mean?

The name Archaeopteryx comes from the Greek words for ‘ancient’ and ‘feather’ or ‘wing’.

Was Archaeopteryx A Bird Or A Dinosaur? 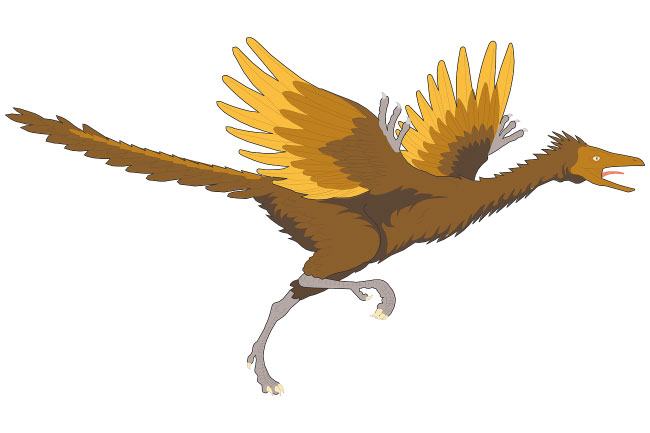 In 1859, Charles Darwin published his famous book ‘On the Origin of Species’. He described a process called ‘natural selection’, in which animals slowly change over generations.

After Archaeopteryx was discovered, biologist Thomas Henry Huxley used it as proof of Darwin’s theory. He was the first person to realize that birds may have evolved from dinosaurs.

Scientists are divided over whether or not Archaeopteryx could actually fly, rather than just glide. Although its feathers are structured in the same way as a modern bird’s, studies suggest that they were probably not as strong.

However, the presence of a wishbone suggests that Archaeopteryx was capable of ‘flapping flight’, even if it was just for short distances. It probably flapped its wings to prolong its glides from tree to tree, or to escape from predators from the ground.

Was Archaeopteryx The First Bird?

For many years, Archaeopteryx was generally accepted as being the first known bird. It is in a group of dinosaurs known as Avialae, from which all modern birds are descended.

Recently, older avialans such as Aurornis, which is believed to predate Archaeopteryx by about 10 million years, have been discovered in the Tiaojishan Formation, a dinosaur fossil hotspot in China.

Differences in size and other characteristics between the Archaeopteryx specimens so far discovered have led to more than one species being suggested. Currently, two main species have been identified: Archaeopteryx lithographica and Archaeopteryx siemensii.

We hope that you have enjoyed these Archaeopteryx facts. This flying dinosaur / early bird certainly was an important find because it helped us to explain the link between dinosaurs and birds.