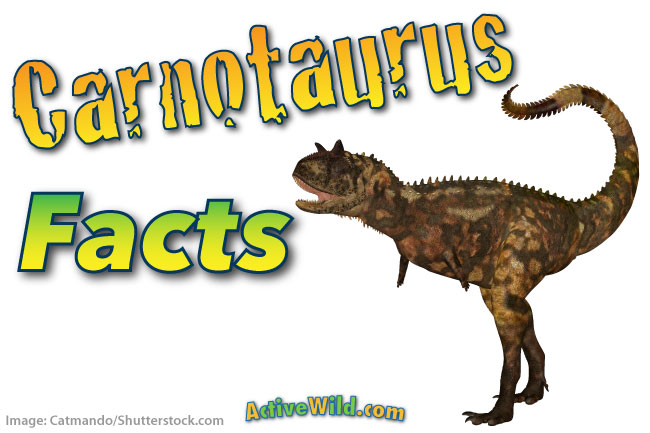 Carnotaurus facts, information and pictures for kids, students and adults. On this page, we’re going to meet Carnotaurus, a large South American meat-eating dinosaur … with horns.

Carnotaurus Facts, Information And Pictures For Kids, Students And Adults

Carnotaurus was a mid-sized theropod dinosaur. It lived in what is now South America in the late Cretaceous period, around 72 to 69.9 million years ago.

The artist’s impression below is one interpretation of what Carnotaurus looked like. 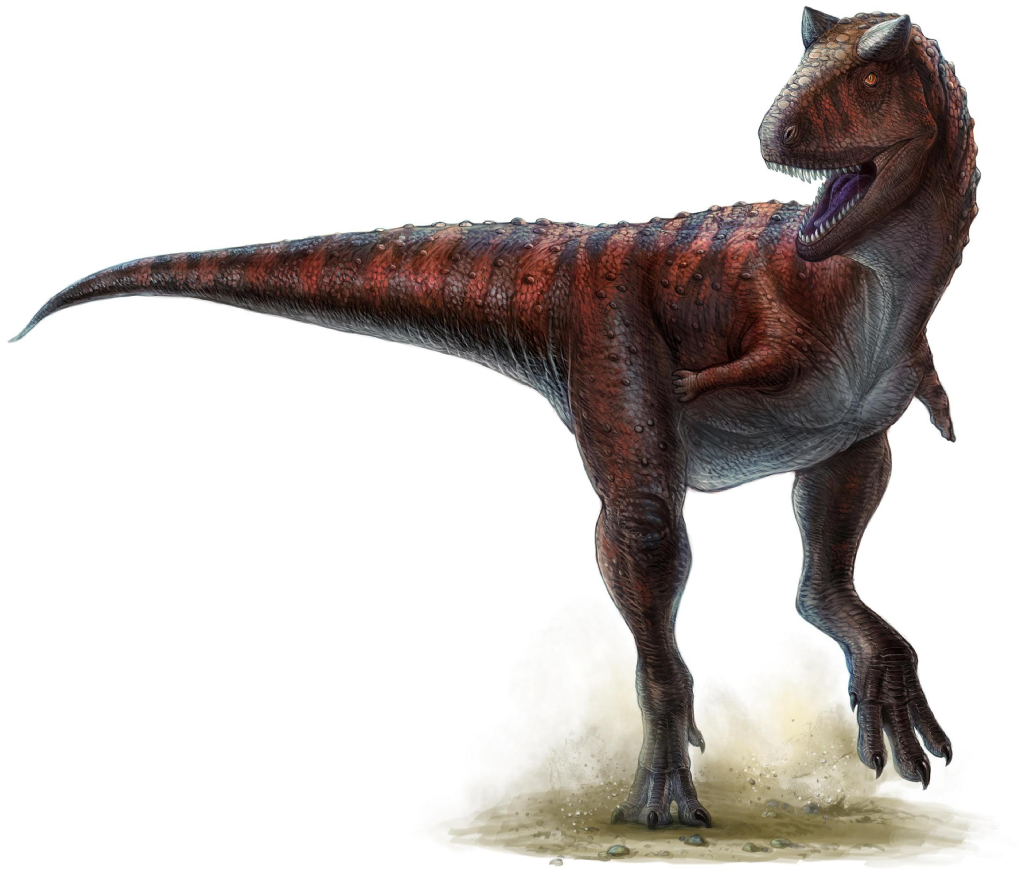 Carnotaurus had the typical ‘look’ of a theropod such as T Rex. It was bipedal (i.e. it walked on two legs), and had a long tail that provided balance and stability. Like T-Rex it had short arms and a big head.

However, there are one or two things about Carnotaurus which differentiate it from other, similar dinosaurs.

Carnotaurus was one of the few theropod dinosaurs to have horns. Positioned just above the eyes, the horns were thick at the base and cone-shaped. Although the fossilized horns are relatively short and blunt, in a living dinosaur these bony stubs may have had a longer and more pointed non-bone outer layer.

There are a number of theories as to what Carnotaurus’s  horns were for:

Some paleontologists think Carnotaurus males used their horns to fight among themselves to establish dominance – in much the same way as deer stags do today.

Other paleontologists think that the horns were used to attack prey animals.

Carnotaurus had a powerful neck, suggesting that its head could have been used like a battering ram – either for hunting or for fighting another Carnotaurus.

Other studies have shown that Carnotaurus’s top jaw may have been used to batter large prey animals – likely to have been sauropods – into submission.

Carnotaurus had a proportionally shorter skull than similarly-sized dinosaurs. Its jaws are curved, giving it a rather frightening grin.

How Big Was Carnotaurus?

Carnotaurus had shorter arms than any other large meat-eating dinosaurs. Yes, its arms were even shorter than the famously short-armed T Rex!

Scientists believe that the arms of Carnotaurus may have been ‘vestigial’. This is when a body part has lost its functionality but has remained present on an animal as it evolved.

Perhaps Carnotaurus’s arms served no purpose at all!

Compared to other large, bipedal meat-eating dinosaurs, Carnotaurus was reasonably large, but quite lightly-built. It seemed to have been designed for speed rather than strength.

It had long, powerful legs, which scientists think may have allowed it to reach speeds of up to 35 mph (56 km/h).

Carnotaurus could quite possibly have been the fastest large theropod.

All that we know about Carnotaurus comes from just one skeleton. However, it is one of the best-known theropods from the southern hemisphere because the skeleton was so well-preserved.

The specimen was in such good condition that skin impressions were present. These revealed that much of Carnotaurus’s skin was made up of small (5mm in diameter) scales.

Larger bumps were also found. These may have been ‘scutes’ – bony plates that formed in the skin, like those running down the back of Ankylosaurus.

The name Carnotaurus comes from the Latin words for ‘meat’ and ‘bull’. Therefore, Carnotaurus means ‘meat-eating bull’. The name refers to Carnotaurus’s dietary preferences and its bull-like horns!

Carnotaurus is a genus (a ‘type’ of animal). The name given to the only known species of Carnotaurus is Carnotaurus sastrei. The ‘sastrei’ part comes from the name of the owner of the farm on which Carnotaurus was discovered, Angel Sastre.

Where Did Carnotaurus Live?

Carnotaurus was found in Chubut Province, Argentina in 1984, during an expedition led by Argentine paleontologist José Bonaparte.

In the late Cretaceous, when Carnotaurus walked the earth, South America was separated from both Africa and North America.

If you’re interested in seeing Carnotaurus in the flesh (okay, not in the flesh, but you know what we mean), you can visit the Argentine Museum of Natural Sciences.

Residents of California can see a life-sized replica of the skeleton at the Natural History Museum of Los Angeles County.

Several other Carnosaurus reconstructions are on display, including the one below, which can be seen in Prague. 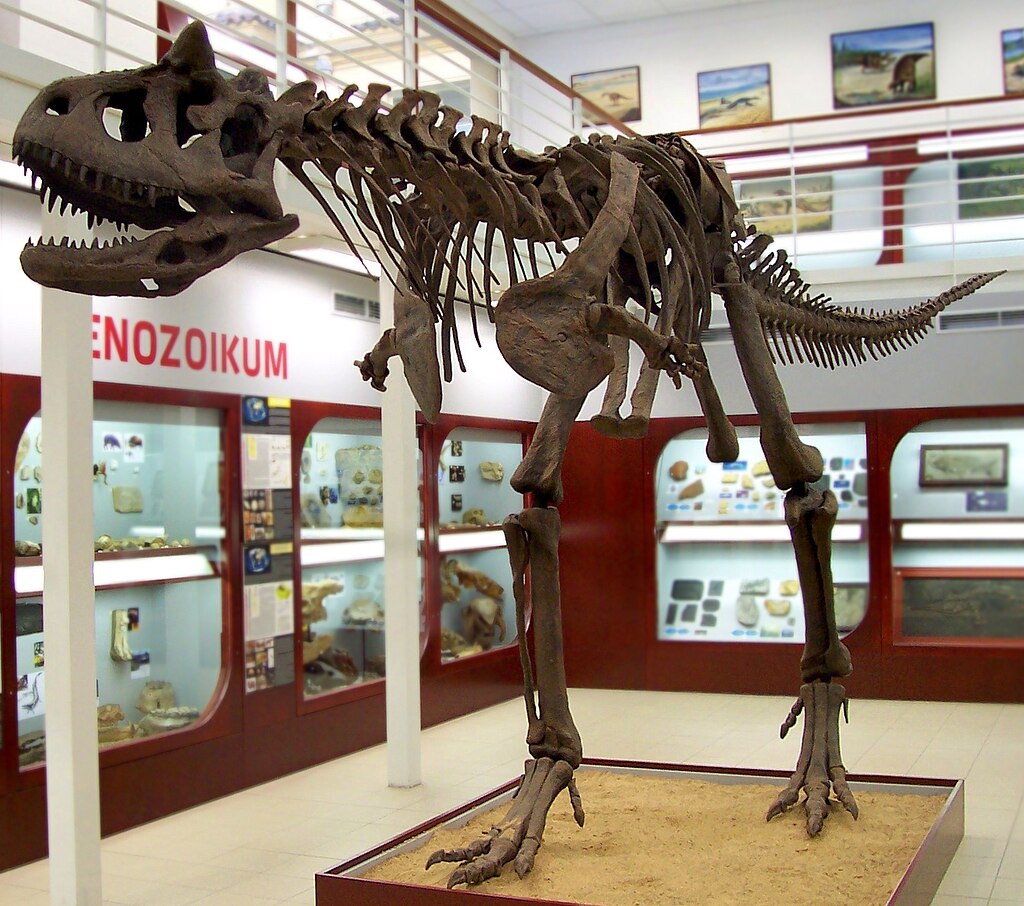 Carnotaurus is a member of the Abelisauridae family of dinosaurs. Carnotaurus was the second member of this family to have been discovered; Abelisaurus, from which the group gets its name, was the first.

We hope that you have enjoyed learning about this speedy but fierce predator. You can find out about its close relative the Abelisaurus here.