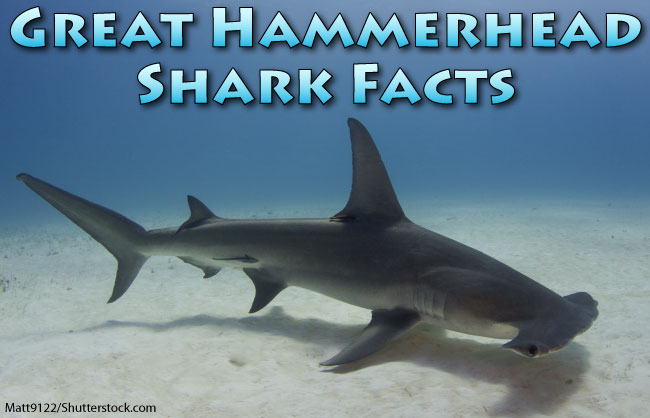 Compared to other hammerheads, the great hammerhead shark’s head has an almost straight front, and the shark’s tall dorsal fin (the fin on the its back) has a distinctive sickle shape. The hammerhead’s skin is gray-brown, fading to white on the underside, and is covered in small tooth-like bumps called dermal denticles.

The lifespan of a great hammerhead shark is around 20 to 30 years.

Where Is The Great Hammerhead Shark Found?

The great hammerhead shark has a large range (the area in which it is found). It inhabits tropical and warm temperate waters between latitudes 40°N and 37°S all around the world. It is usually found near the coast.

The great hammerhead shark occurs in a wide range of habitats, including: coral reefs (its preferred environment), near islands, in lagoons and in deep water near land.

This species often swims near the surface, but has also been found at depths of up to 80 m (262 ft.). During the summer months, the great hammerhead makes long migrations either north or south towards the poles.

Is The Great Hammerhead Shark Dangerous?

Although the great hammerhead shark is not overtly aggressive towards humans, it is potentially dangerous. Due to its large size and sharp, serrated teeth, attacks from great hammerheads can cause serious injury and the shark should therefore be treated with caution.

If threatened, the great hammerhead shark may begin an aggressive display, swimming jerkily with the pectoral fins (the fins on either side of the body) side lowered.

Apart from humans, the only real threat to a mature great hammerhead shark is the killer whale (Orcinus orca).

Great hammerhead pups are sometimes eaten by larger sharks such as the bull shark (Carcarhinus leucas).

What Do Great Hammerhead Sharks Eat?

The great hammerhead shark is a solitary hunter. It seeks out its prey at dawn and dusk either near the surface or on the seabed.

The great hammerhead shark eats a wide range of prey, from bony fish and smaller shark species to squid and crabs. It is particularly partial to stingrays, apparently not bothered by the species’ venomous spines; one individual was discovered with 96 spines attached to its mouth.

The great hammerhead is also known to be cannibalistic, devouring members of its own species.

Why Has A Hammerhead Shark Got A Hammer-Shaped Head?

The curiously-shaped head – called a ‘cephalofoil‘ – is the most notable feature of the great hammerhead shark, and one the reasons why it’s such an efficient predator.

The placement of the eyes at either end of the wide head give the shark a 360-degree view of its surroundings. Furthermore, the wide snout is lined with sensory organs called ampullae of Lorenzini. These can detect electrical currents emitted by prey animals, pinpointing their location even when the prey is buried in the sand.

All sharks have these electroreceptive organs, but on a hammerhead’s cephalofoil they are spread out over a wider area and are therefore more efficient.

The shape of the head also improves the shark’s maneuverability, helping it to make quick changes in direction in order to strike at prey.

The great hammerhead shark often hunts in open water, but the position of the mouth under the T-shaped head makes the shark best suited to capturing prey on the seabed.

When the shark locates a stingray, it pins its prey down with its ‘hammer’ and devours the helpless fish in large bites.

The gestation period (the period during which young develop inside of a female animal) of the great hammerhead shark is 11 months. The great hammerhead’s eggs hatch within their mother’s body and the newborn sharks emerge fully developed. A female will produce a litter only once every two years, and bears between 6 and 55 pups per litter.

In the Southern Hemisphere young are born between December and January in waters off Australia. In the Northern Hemisphere great hammerhead sharks give birth from late spring to summer.

The newly-born young are 50 to 70 cm long. To assist with the birth, their cephalofoils are more rounded and softer than adults’, hardening as the pups get older.

Is The Great Hammerhead Shark Endangered?

The great hammerhead shark is currently rated ‘Endangered’ by the IUCN, and its population is decreasing. This is mainly due to human activity.

Since the females bear young only every two years, the species is particularly vulnerable to over-exploitation and suffers disproportionately from population declines (with slow reproductive rates, it takes longer for the species to make up for the numbers lost due to hunting).

The high mortality rate at capture and the high value of its fins add to the great hammerhead shark’s poor prospects.

Sadly this is yet another amazing animal under threat of extinction. Hopefully after reading this article you’ll help raise awareness of the plight of the great hammerhead shark by telling other people and spreading the word.

You can find out about more incredible animals by visiting the following related pages: